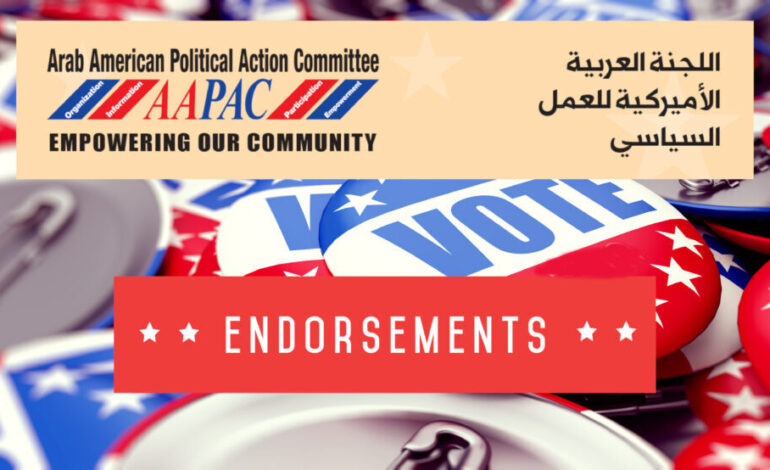 AAPAC members and endorsees have been local civic and political mainstays and the group has been an integral part of local Arab American political activity, inspiring similar Arab American groups to spring up in Metro Detroit.

AAPAC’s President Farah Hobballah told The Arab American News that its important for voters to come out and participate in this primary election.

“AAPAC members voted to endorse the candidates we believed were most qualified,” Hobballah said. “We urge the voters to turn out in numbers and support the endorsed candidates. Turnout is expected to be low in August, so every vote could make the difference.”

Local voters have some important decisions to make in this August’s primary elections. Citizen-led independent redistricting efforts have created three new State House districts in the Dearborn, Dearborn Heights and Detroit areas that have opened up possibilities for a slate of Arab American candidates for key seats. We urge the voters to turn out in numbers and support the endorsed candidates. Turnout is expected to be low in August, so every vote could make the difference. — Farah Hobballah, AAPAC president

Here are AAPAC’s endorsements for the Tuesday, August 2 primary election.

The best way to find out your exact precinct location, and which candidates and proposals appear on your ballot, is to visit the Michigan Voter Information Center online at mvic.sos.state.mi.us

Voters on the permanent absentee list have been mailed applications by their local clerk, while some clerks may mail applications to all registered voters in their jurisdictions. Whether they have received an application in the mail or not, voters can apply to vote absentee at Michigan.gov/Vote. Voters who have already submitted their application can also track that it has been received and track the mailing of their ballot.

In Dearborn, absentee voter applications are available in both English and Arabic on the city’s website. And now, for the first time, Dearborn voters will have access to Arabic language ballots, including voting instructions, as well as a computerized voting program for those with disabilities.

Dearborn Homecoming gets record-breaking $126,000 in scholarships