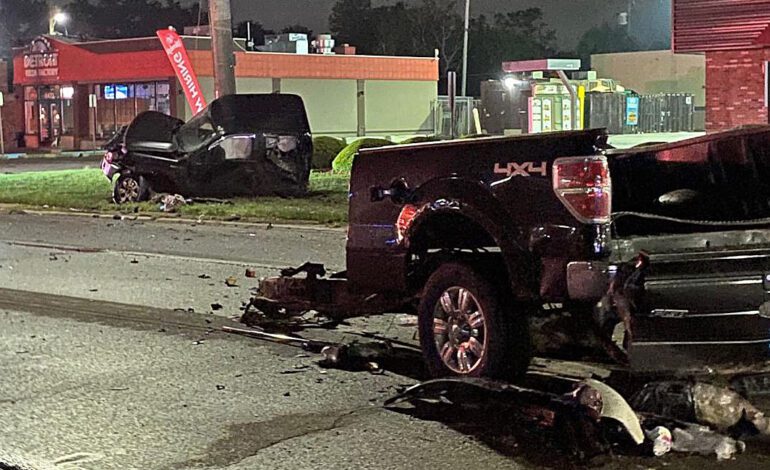 DEARBORN HEIGHTS — A late-night traffic incident in Dearborn Heights has left two people with serious injuries and another two in critical condition.

A preliminary investigation into the accident revealed that a white 2017 Mercedes driven by a 32-year-old Inkster man broadsided a 2009 Ford F-150 pickup truck driven by a 41-year-old Detroit man.

Witnesses reported that the driver of the Mercedes was driving recklessly at speeds estimated upward of 100 mph. The severity of the impact left the pickup cut in half.

While the Dearborn Heights Traffic Bureau was reconstructing the accident scene, at around 1:30 a.m., a 20-year-old Detroit man driving a 2008 Dodge Charger drove around emergency vehicles and flares before swerving off the roadway, nearly striking a marked Dearborn Heights police vehicle, a tow truck and Traffic Bureau officers before coming to a stop.

Officers arrested this man after smelling the odor of intoxicants on him. After resisting arrest, he was taken to an area hospital for treatment for a cut on his chin. Police secured a search warrant for a blood draw, which was taken at the hospital.

The man was released from the hospital and taken into custody, where charges will be sought pending receipt of the blood test results. The Traffic Bureau will present its findings of the accident scene to the Wayne County Prosecutor’s Office.

“As drivers, we all have an obligation to our fellow motorists and pedestrians to drive with a clear mind and to obey traffic control devices and speed limits,” Dearborn Heights Police Chief Jerrod Hard said. “According to the eyewitness accounts, speed and reckless driving were contributing factors in the initial serious injury accident — and to then have yet another motorist put our officers’ safety in jeopardy by allegedly driving under the influence is unacceptable. We have to do better, start caring about others and take our responsibility to safely operate motor vehicles seriously.”