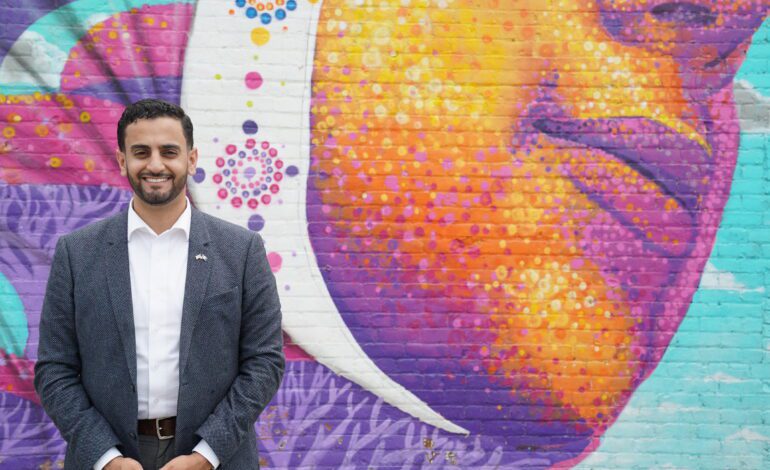 HAMTRAMCK — Abraham Aiyash is running to retain his seat in the State House in the August 2 primary election, in a redrawn district that includes new neighborhoods in Detroit, as well as the area covering Hamtramck that he currently represents.

The energetic community advocate has long been closely associated with local progressive Democratic politics, once serving as a surrogate for former presidential candidate Bernie Sanders.

He also previously worked for former State Rep. Rose Mary Robinson (D-Detroit), but was also a close friend and fellow organizer with the late State Rep. Isaac Robinson (Rose Mary’s son), who tragically passed away from a suspected coronavirus infection in 2020.

Aiyash would subsequently run for the District Four seat the late Robinson occupied for a little over a year, beating out his competition by wide margins in both the primary and general elections.

A Hamtramck native and Michigan State University grad, Aiyash is the child of working class Yemeni immigrants and has long been embedded in the area’s social and political life.

Besides representing the diverse city, which now has the U.S.’ first all-Muslim City Council and mayor, Aiyash is often seen at landmark community events and has even mediated diverse interests in the city during times of conflict. In his time in the state’s legislature, particularly during the COVID-19 crisis that heightened burdens on already cash-strapped communities like Hamtramck, Aiyash worked to increase educational funding and brought in federal dollars to aid in pandemic disruptions to schooling.

Compared to his current district, the newly drawn District Nine extends out further east into historic Detroit neighborhoods, as well more areas in and around downtown Detroit that have seen a surge of real estate investments.

“Its incredibly important for us to make sure that we have conversations with community members centered around their issues,” Aiyash told The Arab American News this week.

Sixty percent of the Detroit area covered under the redrawn district is new. Aiyash said it was important to have intentional conversations with voters in the majority-Detroit district.

“What we’ve been hearing from a lot of folks is the need for neighborhood investment,” he said. “I (hope to) cover a significant part of the east side of Detroit and these are folk that have seen record investments in downtown, midtown and New Center, and not enough focus on their east side neighborhoods.

“A lot of people are coming to us and saying they want better city services, to address blight, to make sure our communities are safe and that reckless driving and violence are addressed.”

What we’ve been hearing from a lot of folks is the need for neighborhood investment. — State Rep. Abraham Aiyash (D-Hamtramck)

In his campaign for the newly drawn District Nine, Aiyash is bringing along his past advocacy for issues like environmental justice.

Before becoming a state rep. himself, Aiyash mobilized his community to fight back against a corporation wanting to build a toxic waste site on the Hamtramck-Detroit border.

“We have areas in the district that have the Stellantis plant that has had numerous environmental violations. Obviously the U.S. Ecology plants are still in the district, as well as several other industrial sites that have created pollutants in the community — a big concern for residents,” Aiyash said.

Many candidates, including Aiyash, are aware of voter indifference that lead to low turnout in midterm elections.

“I think it’s incredibly important that people recognize, as much as folks get frustrated with what happens nationally, a lot of issues that happen on the federal level impact us tremendously,” he said.

Most funding that addresses important infrastructure issues, like flooding, funnels through the state, so the state legislature is a critical component of local governance, a point echoed by candidates running for State House and Senate seats in Metro Detroit.

Aiyash is proud of being the only member of the state’s legislature with absolutely no corporate political donations.

The best way to find out your precinct location, get a sample ballot, get absentee voting information and more for the August 2 primary election is to visit the Michigan Voter Information Center at mvic.sos.state.mi.us, or by contacting your local city clerk.