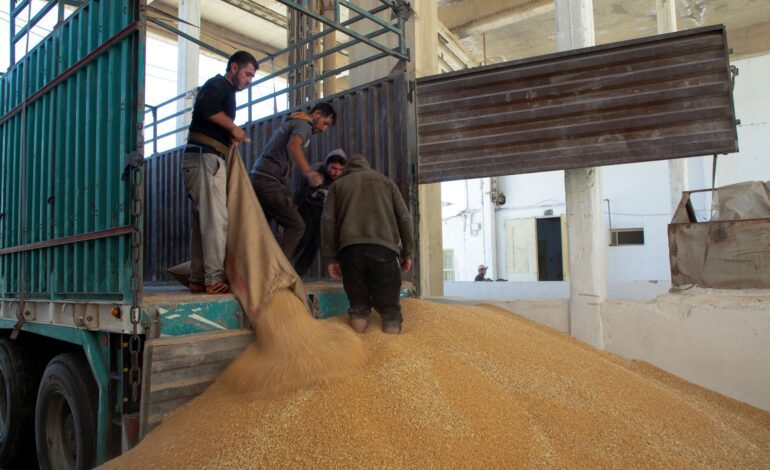 Workers unload grains of wheat at silos in the city of Qamishli, in northeastern Syria, July 1. Photo: Orhan Qereman/Reuters

Poor rainfall, fuel shortages, soaring fertilizer prices: It’s been a bad year for farmers in northeastern Syria, where a disappointing wheat crop looks set to deal another blow to food supplies in a country grappling with climate change and war.

Farmer Mohamed Hussein said he planted around a fifth of the area he would usually cultivate this season because of difficulties which have been compounded by rising global fertilizer prices — a side effect of the Ukraine war.

“We are suffering from a shortage of diesel, expensive fertilizers,” added Hussein, 46, speaking as a combine harvester mowed its way through a field of wheat behind him in a village near the city of Qamishli in the northeast.

The northeast is vital to Syria’s grain production, but the Kurdish-led authorities that control the area do not expect this year’s harvest to meet the needs of their region, let alone allow for supplies to other parts of Syria.

It adds to the bleak picture for Syrian wheat output that has slumped since the war erupted in 2011, fueling concerns over food security in a country where the U.N. says needs are at unprecedented levels.

Similar to last season, he said the harvest had been hit by a delay in the onset of rainfall, prolonged seasonal dry spells and a devastating early cessation of rainfall.

Crops were also affected by weather anomalies, including frost and sharp rise in temperatures.

“Food costs have risen dramatically, production and supply has been low and the indications for the next harvest are very worrying,” he told Reuters. “We are extremely concerned about the overall food security situation.”

From blessing to burden

Syria’s grain output dropped from an annual average of 4.1 million tons prior to the crisis — enough to meet domestic demand — to an estimated 1.05 million tons in 2021, according to the U.N.’s Food and Agriculture Organization.

While wheat imports from the Syrian government’s ally Russia have plugged some of the gap, food insecurity across the fractured country is more acute than at any point since the war began, due to factors including the Syrian pound’s collapse.

The World Food Program says 12.4 million Syrians, or close to 70 percent of people in the country today, are food insecure.

Nabila Mohamed, a senior official overseeing agricultural development in the Kurdish-led administration that runs the northeast, said that so far, 379,000 tons of wheat have been harvested this year in the region.

The expected yield is 450,000 tons — less than the 600,000 tons she said was needed to meet the area’s needs, meaning there would be no surplus to supply to Syrian government-held areas.

“Last year there was little rain. This year there was rain, but it didn’t come at the right time,” said Mohamed, adding that the Ukraine war had also weighed on farmers by increasing the prices of imported fertilizers.

A small proportion of rain-fed areas had been harvested, with the crop depending mostly on irrigated lands, she said. This year’s harvest in the northeast has been better than last due to more licences being issued for well-drilling, she added.

FAO has said that farmers in rain-fed areas of Syria have lost most of their crop for the second year running.

Mohamed Ahmed, 65, said he had suffered heavy losses due to drought, describing his land as more of a burden than an asset.

“We complain about this land, from which we have made losses for two consecutive years,” he said. “We gave it to shepherds to graze their livestock.”

How much extra oil can Saudi Arabia pump?