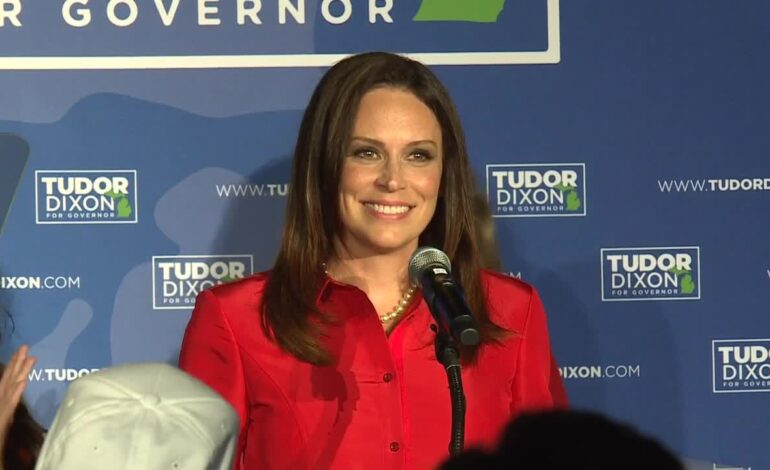 Tudor Dixon has won the GOP primary race for governor.

On Tuesday, shortly before 10 p.m. with 16 percent of  the votes counted, the Associated Press declared Dixon to be the winner. She’ll face Governor Whitmer in the November general election.

This marks the first time two women will face off in the governor’s race in Michigan.

The Republican primary for governor was wild from the start, with five candidates getting kicked off the ballot for failing to file enough valid nominating signatures.

Since then, the remaining candidates, Dixon, Ryan Kelley, Kevin Rinke, Garrett Soldano and Ralph Rebandt, have been battling it out.

Dixon, who received an endorsement from former President Trump last week, was the only woman candidate in the GOP race for governor. “Thank you, Michigan,” Dixon said during her victory speech. “Thank you for believing in me and yourselves. And thank you for standing for what’s right, and what matters and what matters for responding to our campaign of ideas and optimism of a vision to get our beloved state back on track.

“We have all suffered because of Gretchen Whitmer. This policy stopped us from doing what the people of Michigan do best from providing for our families, strengthening our communities working hard and every day working to make Michigan the best place in the world to live. Friends, we can get there again; we just need a governor with the plan, the vision and the leadership to get us there.”

Dixon has been the subject of attacks from her fellow candidates throughout the race – both in on-air advertisements and on the debate stages. Her endorsements by the Police Officer’s Association, Right to Life Michigan and the powerful DeVos family have earned her the label of the “establishment” candidate by the others.

Garrett Soldano released a statement after the Associated Press called the race for Dixon:

“A congratulations to Tudor Dixon, who won a hard-fought primary race to take on Gretchen Whitmer this fall,” said Ambassador Ron Weiser, MIGOP chairman. “It’s time to unite behind Tudor Dixon because Michiganders simply can’t afford four more years of her failures to fix the roads, provide real inflation relief to families and prevent our children from falling behind on their education. Tudor Dixon is the real leader that Michigan needs and parents can count on her to usher in a new era of prosperity and opportunity for all.”

“While tonight’s results are not what we had hoped for, the people of Michigan have decided on another candidate and I want to congratulate Tudor Dixon on her victory,” Rinke tweeted. “My hope for the state of Michigan remains unchanged and I look forward to continuing our family’s work of bettering the state we love so much.”

“Tudor Dixon has made clear that she will drag Michigan backwards. Dixon’s plans to ban abortion with no exceptions for rape, incest or health of the mother and throw nurses in jail, gut funding for public education, reverse progress rebuilding Michigan’s infrastructure and sow distrust in our democracy are dangerous for Michigan women and families.”