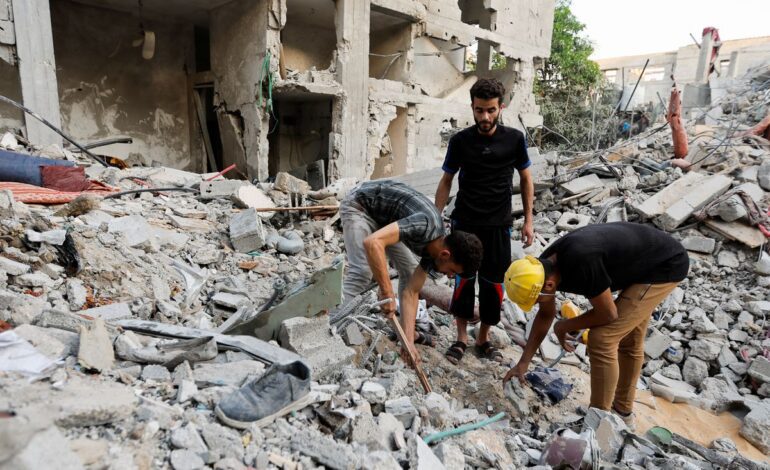 Palestinian men look through debris as people gather at the scene where the senior commander of the Islamic Jihad militant group, Khaled Mansour, was killed in an Israeli strike, in Rafah in the southern Gaza Strip, Aug. 7. Photo: Reuters

Israel and Palestinian soldiers agreed to a Cairo-mediated truce to take effect late on Sunday, sources said, raising hopes of an end to the most serious flare-up on the Gaza frontier in more than a year.

Islamic Jihad, the faction that Israel has been fighting in Gaza since Friday, and a Palestinian official familiar with the ceasefire efforts said the truce would come into effect at 23:30 (20:30 GMT). Israel did not immediately confirm this.

Palestinian and Egyptian sources had previously given earlier times for the truce.

The latest violence have echoed preludes to previous Gaza wars, though they have been relatively contained as Hamas, the governing group in the Gaza Strip and a more powerful force than the Islamic Jihad, has so far stayed out. Palestinians gather to bury a child victim of the Israeli bombing of besieged Gaza, Aug. 7. Photo: The Palestine Chronicle

Gaza officials said 41 Palestinians, almost half of them civilians and including 15 children, had so far been killed. Rockets threatened much of southern Israel and sent residents in cities including Tel Aviv and Ashkelon to shelters. Israel said its Iron Dome interceptor, the success rate of which the army put at 97 percent, shot down the rockets just west of the city.

Israel launched what it called preemptive strikes on Friday against what it anticipated would be an Islamic Jihad attack meant to avenge the arrest of a leader of the group, Bassam al-Saadi, in the occupied West Bank.

In response, Islamic Jihad fired hundreds of rockets at Israel. The group said the truce would involve al-Saadi’s release. Israeli officials did not immediately comment.

On Sunday, Islamic Jihad extended its range to fire toward Jerusalem in what it described as retaliation for the overnight killing of its southern Gaza commander by Israel — the second such senior officer it has lost in the fighting. Israeli children run inside a bomb shelter as a siren goes off, indicating incoming rockets fired from Gaza towards Israel, in Ashkelon, Israel, Aug 7. Photo: Reuters

Palestinians dazed by another surge of bloodshed — after outbreaks of war in 2008-09, 2012, 2014 and last year — picked through the ruins of houses to salvage furniture or documents.

“Who wants a war? No one. But we also don’t like to keep silent when women, children and leaders are killed,” said a Gaza taxi driver who identified himself only as Abu Mohammad. “An eye for an eye.”