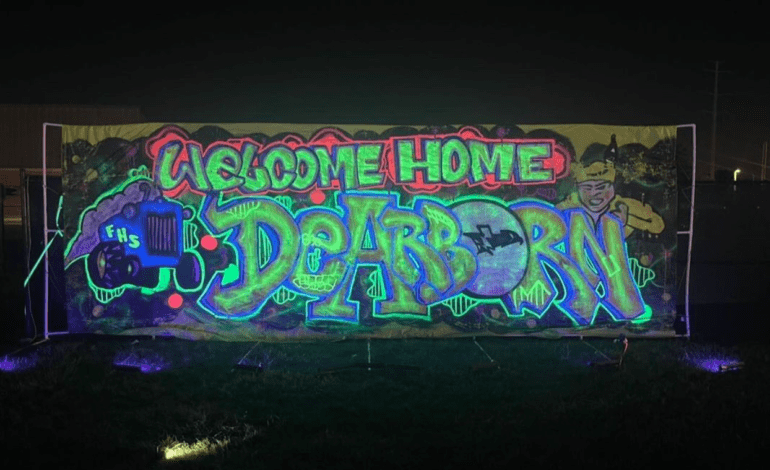 DEARBORN — This past weekend the 41st Homecoming Festival, an annual Dearborn tradition going back to the 80s, returned after a two-year hiatus.

On his Facebook livestream this week, Mayor Abdullah Hammoud expressed his desire to see the festival return.

“Given the pandemic, given the catastrophic flooding last year, I thought that, and felt as a Dearbornite through and through, we needed to bring back Homecoming Festival,” he said. “Something for the community to enjoy, in order for us to pull together, connect with one another.”

The new location offered a larger land area for the festivities, which included the customary carnival rides, gala shows, high school class reunions and nightly performances, as well as bringing together the city’s diverse community in cultural tents that featured traditional dishes, artistic heritage and historical perspectives. And, of course, fireworks: this year’s grand pyrotechnic show set off from a field near Ford’s World Headquarters.

Bilal Baydoun, director of communications, explained why the event’s relocation was important.

“We’ve been monitoring the Rouge River all year and the water levels are uncharacteristically high,” he said. “We’ve had issues with flooding. For example, Dearborn Hills Golf Course and other parts of the city. So, we made the informed decision to move to the Ford Community and Performing Arts Center.”

Photos: A ribbon cutting ceremony attended by Dearborn’s Mayor Abdullah Hammoud with city officials, and some of the activities featured at the 41st Homecoming Festival

Baydoun also mentioned the initial uncertainties about the possibility of the event taking place.

“It was definitely a team effort,” he said. “It took extraordinary coordination, from the Department of Public Works to the Police and Fire for contingency plans and emergency weather protocol.”

Baydoun also mentioned the time constraint, as the team only had several months to accomplish what would normally take a year.

The mayor in particular was keen on making sure the event ran smoothly. On the spur of the moment, he embarked on a golf cart and drove between lots in order to be as available and helpful as he could.

He admitted to not having been “dressed the part” of mayor, so as a few attendees had unknowingly hopped on his golf cart to be dropped off elsewhere, he had been able to listen in on upfront, off-the-record reactions to the weekend’s festivities. Some would even offer him a tip, whereupon the mayor would politely refuse and explain this was simply “part of the job” and – to the unknowing attendees’ humorous disbelief –  finally reveal who he was and drive off.

Despite the obstacles, the event still took place. Whether it’s the number of attendees, sponsorships or community involvement, it was a clear success for Dearborn this weekend.

Here’s another quick, easy way to get free COVID tests delivered to your doorstep