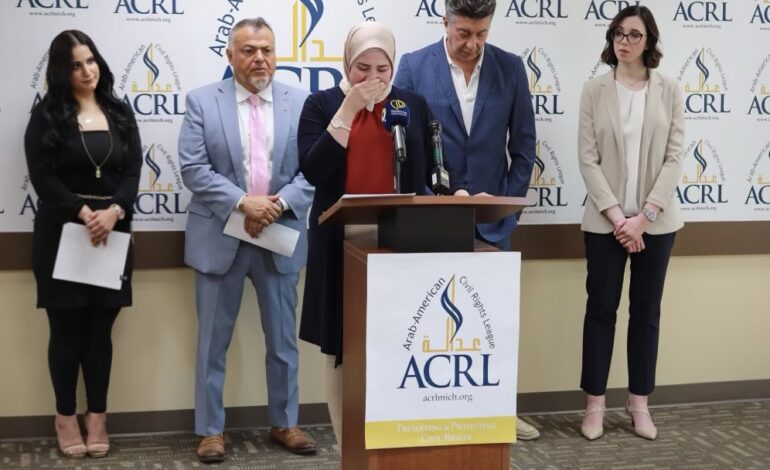 DEARBORN — An Arab American, Muslim woman from Northville has filed a discrimination complaint with the Michigan Department of Civil Rights Thursday against her former employer, Costco.

Wafa Aziz, 44, says she appealed with management at the Costco locations in Livonia were she worked, to address an environment of discriminatory and harmful practices directed at her, to no avail.

The complaint was filed Thursday.

Aziz says she endured discrimination, intimidation, humiliation and harassment while working for Costco. Instead of taking corrective action, management demoted her and lied to her in order to force her out of her position.

“They spread rumors to break my morale and to cause other employees to distrust me,” Aziz said during a press conference at the offices of the Arab-American Civil Rights League (ACRL) in Dearborn on Thursday. “This tactic would have been useful to push me out, but my financial need to support my two children as a single mother was greater.”

According to the ACRL, Aziz alleges she endured a constant hostile work environment created by Costco employees and managers alike. She would be laughed at, made fun of and falsely accused with no evidence to substantiate or support the false allegations.

When she first began working at the store in 2018, Aziz said she overheard managers saying “we can keep her for a bit for (minority) numbers.”

Aziz managed to stay on, but soon encountered discrimination from co-workers because she wore a hijab while on the job.

“Did you hear her right? I don’t think you can hear with that thing on your head,” she was told.

Aziz said she tried to take advantage of the company’s “open door” policy, but rather than have her issues resolved, she received backlash from a manager who only exacerbated the problem.

“Costco claims to have an anti discrimination policy in place to protect its employees,” said Aziz’ attorney, Nabih Ayad. “but when it is exercised by an Arab Muslim women, she is singled out, punished and demoted for calling out her treatment at the hands of Costco management.”

Since no serious disciplinary action ever was taken, Ayad said it only served to normalize the prejudice.

“The community holds a public trust to ensure that its citizens and workers feel safe and included no matter their faith, race or nationality,” said Mariam Charara, executive director of the ACRL, which advocates for people who have faced discrimination, like Aziz. “In this case, Costco and the higher ups have failed in their public trust by failing to take action when faced with evidence of discrimination, harassment and intimidation.”