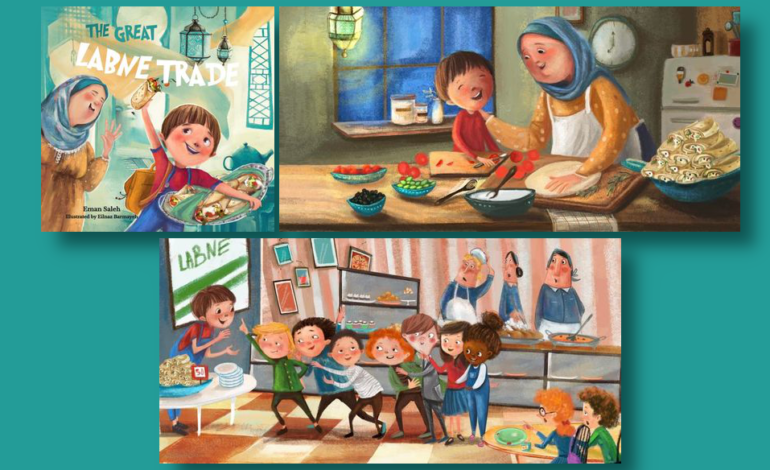 DEARBORN — A Dearborn-based author has penned her first children’s book inspired by a family member’s cafeteria experiences as one of few Arab Americans at their school.

The Great Labne Trade, by author Eman Saleh, is a captivating children’s book meant to be “enjoyed by families across generations.”

“What will his classmates say when Ahmed packs his mother’s famous labne sandwiches?” asks the book. Ahmed finds a clever way to address any unnecessary comments. The reader joins him on his adventure of self-acceptance while he discovers a new passion — entrepreneurship — selling his mom’s delicious yogurt sandwiches to adoring kids who can’t get enough of them.

The book is meant to evoke in readers a sense of pride and hope.

The fictional young Arab American’s story has parallels with Saleh’s own journey to self-publish The Great Labne Trade, which is now available online in hardcover and paperback through Amazon and Barnes and Noble. Saleh has plans to bring the book to stores, as well as local school libraries and class rooms.

“I’ve always loved literacy and children’s literature,” she told The Arab American News. “I’m a former elementary school teacher and I currently own and operate an early learning center. One of the things I enjoyed most as an educator is bonding with children over a good book. I love seeing children get excited about literature, being inspired by a story or seeing themselves represented in a story.”

At home, she said she’s always making up bedtime stories to share with her children and which bring a real joy.

“They often preferred my made-up stories to the ones that were published,” she said. “In college, I took a children’s literature class many years ago and my professor encouraged me to publish a piece I had written for a class assignment; and I’ve considered this in the past. Writing and storytelling has always been something I’ve done in my spare time.”

Though Arab American children and their families likely enjoy some freedom to express themselves culturally in Dearborn schools, given the city’s large Arab population, things can be different for many families in other parts of the country.

The book’s main character is named after Saleh’s older brother. It was Ahmed’s cafeteria experiences as one of the few Arab Americans attending their school in Kansas that inspired the story.

“Growing up in Kansas and Maryland, I felt that my childhood experiences were unique in some ways, but relatable to many children of immigrant families,” Saleh said. “It’s time we start sharing our stories.”

She became seriously invested in becoming an author in the last two years while she was building a collection of children’s books that include Arab American or Muslim children for her home library.

“I observed a growing number of books featuring children that represented my background, but there is still a gap,” she said. “I wanted to contribute to this growing body of work.”

Growing up in Kansas and Maryland, I felt that my childhood experiences were unique in some ways, but relatable to many children of immigrant families. It’s time we start sharing our stories. — Eman Saleh

Saleh said she grew up telling Ahmed’s labne story to family, friends, strangers — anyone who would listen.

She was originally inspired to write a Ramadan story after ordering a few Ramadan children’s books for her daughter, only to revert back to the story she had told over and over again.

“That is when I decided to tell Ahmed’s story to make my debut,” Saleh said. “The writing process came easy to me. I knew I wanted the story to rhyme as I was always drawn to rhyming books as a young child. My first experiences as a young reader was reading books that contained rhymes.”

She counts Dr. Seuss and the Madeline series as some of her favorites.

Getting The Great Labne Trade to the finish line had some challenges, like finding an illustrator, agreeing on an illustration style, editing and laying out the story and deciding on whether she wanted to self publish or attempt to secure a publisher.

“This process took several months, with delays at each step of the way,” Saleh said. “After several trials and revisions, the project was complete. I surprised my brother with it first and received his blessing to share it with everyone. Overall, I’m very pleased with the end result and I can’t wait for everyone to read it!”