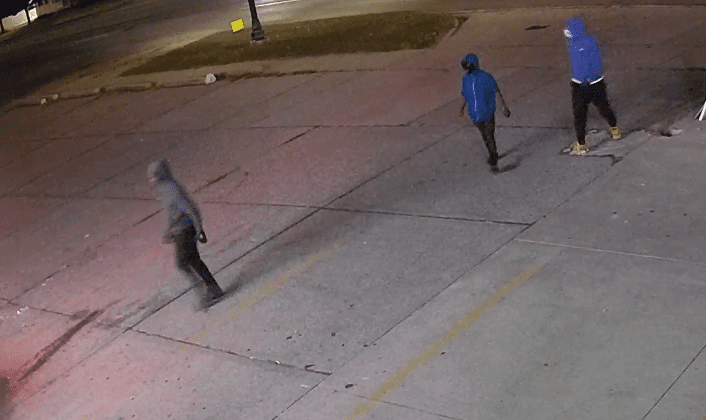 Screen grab of surveillance footage from the scene of the break-ins. Photo courtesy of the Dearborn Heights Police Department

DEARBORN HEIGHTS — Police in Dearborn Heights, Westland and The Bureau of Alcohol, Tobacco, Firearms and Explosives (ATF) are still offering a $20,000 reward for information leading to the arrest and indictment of suspects in firearm burglaries at CC Coins Jewelry and Loan as well as the Westland location of Freedom Holsters.

Though on Thursday, the law enforcement partners said they had apprehended two of the suspects, they are still looking for the public’s assistance in identifying the remaining suspects and the whereabouts of the stolen firearms. They said additional arrests are imminent.

Police said two individuals have been arrested and charged with crimes stemming from the burglaries.

The agencies first put out the call for assistance after last weekend’s break-ins.

According to authorities, on Sept. 11, at approximately 5 a.m. and again on Sept. 12, at approximately 12 a.m, a group of individuals drove vehicles into the front entrance of CC Coins Jewelry and Loan in Dearborn Heights on the 24600 block of West Warren and stole several handguns and long guns that were offered for sale and fled the area. Approximately 50 firearms were stolen from that business.

“We are asking anyone with information about these individuals to contact us immediately,” said Paul Vanderplow, special agent in charge of the ATF Detroit Field Division. “These individuals and stolen firearms pose a threat to community safety as well as our law enforcement partners. Trafficked stolen firearms serve one purpose and that is to terrorize our communities. Take a close look at the images and reach out to us if you have any information.”

Screen grabs from surveillance footage from the scene of the break-ins. Photo courtesy of the Dearborn Heights Police Department

“We are leveraging all local, state and federal partnerships and resources to bring the responsible individuals to justice and recover stolen weapons before another senseless tragedy occurs,” Dearborn Heights Police Chief Jerrod S. Hart said. “We sincerely appreciate the high volume (and quality) of information the public has shared thus far, but we must move beyond words and speak up if you know the identity of the remaining suspects and/or location of the firearms.”

The ATF will offer up to a $20,000 reward to anyone with information about these burglaries. Tipsters should contact the Detroit ATF Field Division at (313) 654-8021.

Information can also be sent to ATFTips@atf.gov or through the ATF’s website at atf.gov/contact/atftips. Tips can be submitted anonymously using the Reportit® app, available from both Google Play and the Apple App store, or by visiting www.reportit.com.

Police say that any information eligible for the reward must lead to the arrest and indictment of an individual. Provide as much information as you can relating to the identity and whereabouts of the individual(s). Information can be submitted anonymously, but if a reward is sought, be sure to include contact information.

ATF offering up to a $20,000 reward for information on firearm burglaries