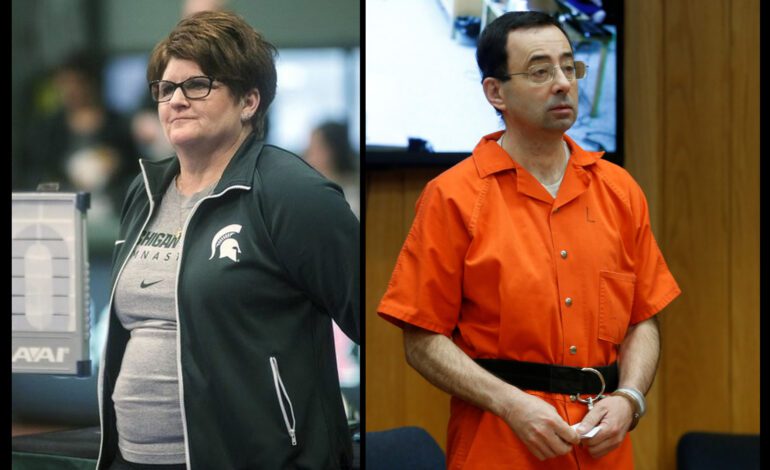 LANSING — Michigan’s Supreme Court turned down an application by the state’s attorney general to reinstate the conviction of a retired Michigan State University gymnastics coach who was accused of lying to investigators about convicted campus sports doctor Larry Nassar.

This is the second high profile case prosecutors have lost in the broader Nassar sexual abuse case.

Since the investigation began in 2016, hundreds of young women, including world renowned gymnast Simone Biles, came forward to report they were victims of Nassar, who was previously an osteopathic sports physician at MSU, Twistar and USA Gymnastics.

Klages spent 90 days in jail in 2020 on that conviction. Though Nassar was already in prison at the time, authorities said they were investigating how the university had responded to allegations about him years earlier.

According to the Associated Press, two women testified at trial that in 1997, while attending a youth gymnastics camp, they told Klages that Nassar had sexually abused them, long before the scandal erupted with extraordinary allegations by others in 2016. Klages insisted she was innocent and could not remember a conversation with either girl, especially two decades later. Two women testified at trial that in 1997, while attending a youth gymnastics camp, they told Klages that Nassar had sexually abused them, long before the scandal erupted with extraordinary allegations by others in 2016.

Klages was the Michigan State women’s gymnastics coach for 27 years before suddenly retiring in 2017.

State prosecutors said Klages’ conviction established that the university was aware of Nassar’s sexual assaults in 1997 and that no action was taken to halt his criminal conduct and protect the young women he later victimized until 2016.

Last December, the Michigan Court of Appeals reversed the Klages conviction, ruling there was insufficient evidence that she made a false or misleading statement to the police that was material to its investigation into Nassar.

The appeals court said state prosecutors never presented evidence that anyone “got away” with a crime due to any alleged cover-up by Klages, adding that authorities seemed to be on a “roving inquiry” to embarrass Michigan State.

Michigan Attorney General Dana Nessel then filed an application for leave to appeal in the Michigan Supreme Court in response to the Court of Appeal’s opinion that reversed Klages’ conviction.

The Supreme Court denied that application this week.

“The Court’s decision leaves in place dangerous precedent for prosecutions,” Nessel said. “In my view, the jury rightly convicted Klages of making false statements that were material to the investigation conducted by my department’s special agents. Absent review by the Michigan Supreme Court, the damaging ruling from the Court of Appeals has the potential to affect all future police investigations.”

In another high profile case associated with Nassar, former Michigan State president Lou Anna Simon was also charged with lying to investigators about her knowledge of complaints against Nassar, but an Eaton County judge dismissed that case, saying there was insufficient evidence.