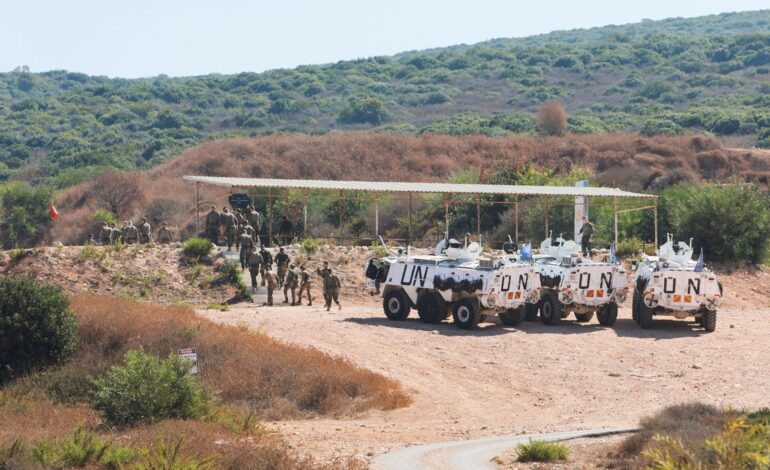 BEIRUT — Lebanon said U.S.-brokered talks to demarcate its maritime border with longtime foe Israel were at a “make or break” point on Thursday after Israel rejected revisions to a draft deal requested by Beirut, throwing years of diplomatic efforts into doubt.

The draft, which has not been made public, had a warm preliminary reception from the Israeli and Lebanese governments. But amid domestic opposition in both countries, Lebanon sought amendments on Tuesday from the U.S. envoy.

On Thursday, Israeli Prime Minister Yair Lapid “was updated on the details of the substantial changes Lebanon is seeking to make and instructed the negotiating team to reject them,” an Israeli official said.

A spokesperson for the U.S. embassy in Jerusalem said the parties were “at a critical stage in the negotiations and the gaps have narrowed.”

According to Israeli media, a main sticking point was over recognition of a line of demarcation buoys Israel has strung out to sea from its coast. Lebanon worries about any action that may connote formal acceptance of a shared land border.

Lebanon — which has never recognized the state of Israel, with any broader peace deal beyond the horizon — has also said Israel will earn no royalties from the Lebanese share of gas in the Qana prospect.

Top Lebanese negotiator Elias Bou Saab told Reuters on Thursday that he would only respond to official statements and not to media reports on Israel’s stance.

He said the deal “is 90 percent done, but the remaining 10 percent could make it or break it”, adding that he was in constant contact with U.S. mediator Amos Hochstein.

Israel has been preparing to activate a gas rig, Karish, which is outside Qana. Hezbollah made veiled threats about Karish that lent urgency to the talks.

Israel previously presented the draft deal with Lebanon, if finalized, as securing Karish. But on Thursday, it changed tack.

Israel is now pressing ahead with Karish, regardless of progress or no progress in the talks, whereas before it cast a successful deal as a means of securing Karish.

“Israel will produce gas from the Karish rig as soon as it is possible to do so,” the Israeli official said, adding that negotiations will “stop immediately” in the face of any threats.

Defense Minister Benny Gantz further hardened the tone, saying in a speech that “Lebanon will bear a heavy military price” if Hezbollah attacks, and he put forces on alert.

There was no immediate response from Hezbollah. Lebanon and Israel are closer than ever to signing a deal demarcating their maritime border, opening the door to new oil and gas exploration, after years of U.S.-brokered negotiations.

While limited in scope, the agreement is set to ease security and economic concerns in both countries, whose shared history is rife with hostility. The deal will only resolve a territorial dispute in the eastern tip of the Mediterranean sea and does not touch on their land borders, which are yet to be settled.

Here are some details of the U.S. proposal discussed on Thursday by Israel’s top ministers.

The border begins around a rocky cliff overlooking the Mediterranean where a U.N. peacekeeping force is headquartered.

The U.S.-proposal, according to Israeli officials, splits the sea border into two sections. The first five km (3.1 miles) from shore will be set along a line that Israel set as its border years ago and has already marked with a row of buoys.

Beyond that, the border will follow a line initially proposed by the Lebanese that is referred to as Line 23. This will demarcate each country’s exclusive economic zone (EEZ).

What about oil and gas exploration?

Israel has discovered huge deposits of natural gas in its EEZ that is both used domestically and exported.

Lebanon has lagged behind. While licences there were issued for two blocks, no production has happened and other blocks have yet to receive bids. A sizeable discovery could help ease Lebanon’s financial crisis, which has left the state unable to import fuel for its power plants.

There is one gas field in a southern Lebanese exploration block, Qana, that extends across Line 23 into Israeli waters. It is estimated to be small and has yet to be explored. Should commercial quantities be found, Israel’s prime minister said the deal allows Israel to get a share of royalties from the field.

Israeli officials have already met with TotalEnergies to discuss a mechanism. Lebanon’s top negotiator, Elias Bou Saab, said Lebanon had retained its rights with Qana and that Beirut would not pay “one cent” from its part of the field to Israel.

A second field, Karish, which is being developed under an Israeli license farther south and due to come online soon, has been threatened by the heavily-armed Lebanese group Hezbollah. Karish is located below Line 23 and will remain under Israeli control, Israel says.

Bou Saab said Lebanon has retained “all” of its maritime blocs.

Could this lead to further diplomacy?

Settling the land border dispute between Lebanon and Israel is much more complicated and lacks the urgency of the energy component. Any resolution there would likely depend on a broader peace deal that is not realistic anytime soon.

Israeli leaders have said only that the maritime deal would help regional stability. Lebanon’s president said that a deal would not signify a “partnership” with Israel.

“We are avoiding a sure-fire war in the region,” Lebanon’s caretaker PM Najib Mikati said on Thursday.