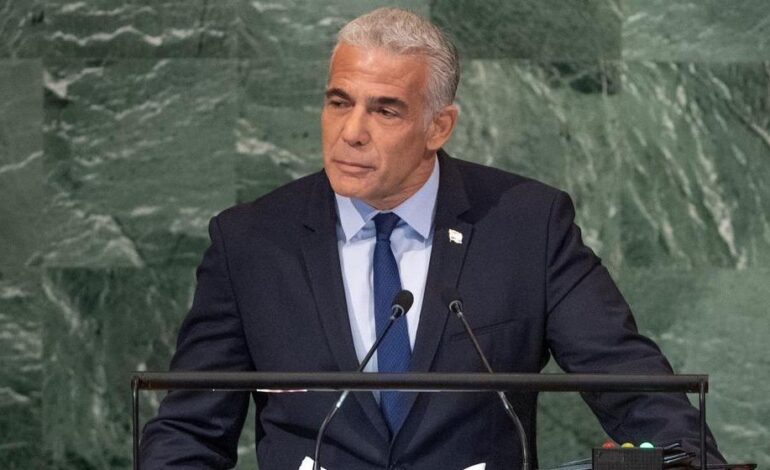 Israeli Prime Minister Yair Lapid threw a wrench into the works when he declared from the United Nations General Assembly podium, “An agreement with the Palestinians, based on two states for two peoples, is the right thing for Israel’s security, for Israel’s economy and for the future of our children.”

The statement took many by surprise, including the Palestinian leadership.

Palestinian leader Mahmoud Abbas has been addressing the UNGA every September, every year, recycling the same speech about how he has fulfilled his commitments to peace and that it is Israel that needs to engage in serious negotiations toward a two-state solution.

This time, too, Abbas did his part as expected. In his latest speech, he referred to Israel’s “total impunity” and “premeditated and deliberate policies” aimed at “destroying the two-state solution.”

Lapid, like Naftali Bennet and Benjamin Netanyahu before him, was also expected to stick to the script: Accusing Palestinians of terrorism and incitement, reeling against the U.N.’s supposed “bias” and making a case of why Israel should be more invested in its own security than in a Palestinian state.

Lapid, however, did not go that route. True, he regurgitated much of the typical Israeli discourse, accusing Palestinians of “firing rockets and missiles at our children”, and the like.  However, he also spoke, unexpectedly, about Israel’s desire to see a Palestinian state.

Hence, Lapid linked the theoretical Palestinian state on the condition it does not become “another terror base from which to threaten the well-being and the very existence of Israel.”

Conditions aside, Lapid’s reference to a Palestinian state remains interesting and politically risky. Indeed, the majority of Israelis — 58 percent, according to the Israel Democracy Institute – do not support a Palestinian state. Since Israel is embarking on yet another general election — the fifth in less than four years — swimming against Israel’s dominant political current does not, initially, seem like a winning idea.

In fact, immediate condemnations of Lapid’s statement by Interior Minister Ayelet Shaked indicate that Lapid’s U.N. comments will definitely be a contentious campaign issue in the coming weeks. For years, the Left and Center in Israel have been embattled, as they appeared to have no answers to any of Israel’s external and internal problems.

So, why did Lapid utter these words?

To begin with, Lapid is not serious about a Palestinian state.

Israeli leaders have used this line since the start of the so-called peace process as a way to demonstrate their willingness to engage in a political dialogue under the auspices of Washington, but without going any further. If anything, for 30 years, Tel Aviv — and Washington — waved the Palestinian state carrot before the Palestinian leadership to win time for illegal settlement expansion and to, ultimately, cite Palestinian supposed rejection, incitement and violence as real obstacles before the establishment of such a state.

Lapid’s language — on the Palestinian state becoming a “terror base” threatening “the very existence of Israel” — is entirely consistent with the typical Israeli discourse on this issue.

Moreover, Lapid aimed to upset the predictable routine at the U.N., where Palestinians make their case, which is usually supported by most U.N. members, and where Israel goes on the defensive. By alluding to a Palestinian state — a day before Abbas made his appeal for Palestinian full U.N. membership — Lapid wanted to regain the initiative and appear a proactive leader with a plan.

Though it may appear that Lapid’s statement was a bad political move within the context of the rightwing-dominated Israeli politics, this might not be the case. For years, the Left and Center in Israel have been embattled, as they appeared to have no answers to any of Israel’s external and internal problems.

Unable to stop the tidal wave of the Right, Israel’s nominally Left, like the Labor party, and Center, like Kahol Lavan, moved closer to the Right. After all, the latter’s ideas, though sinister and violent, are the only ones that seem to be gaining traction among Israeli voters.

Israel’s political dichotomy, however, grew larger, as expressed in the stalemates of four previous elections, starting in April 2019. The Right failed to manage stable coalitions and the Left failed to catch up. Lapid and his Yesh Atid party hope to change all of this by presenting a potentially stable Center-Left coalition that can offer more than mere opposition to the Right’s ideas, visions and plans of their own. The talk of a Palestinian state is, therefore, meant to give whomever is to follow Abbas political leverage that would allow him to stave off an armed revolt and take Palestinians into another futile hunt in search of another political mirage.

U.S. President Biden and his Democratic Party, which remains, at least verbally, committed to a two-state solution, are embarking on very difficult times ahead: The mid-term November election, which could cost them dearly at the House and Senate, and the subsequent presidential elections in 2024. Biden is keen to present his administration as that of military strength and a vision of peace and stability. Lapid’s words about a Palestinian state were meant to entice the U.S. administration, which will likely engage with Lapid’s party and possible coalition government in the future, as a “peacemaker.”

Finally, Lapid is aware of the impending transition in the Occupied Palestinian territories. As an armed Intifada is growing in the northern Occupied West Bank, PA leader Abbas, 87, will soon leave the scene. A potential successor, Hussein al-Sheikh, is particularly close to Israel’s security apparatus, thus completely mistrusted by most Palestinians.

The talk of a Palestinian state is, therefore, meant to give whomever is to follow Abbas political leverage that would allow him to stave off an armed revolt and take Palestinians into another futile hunt in search of another political mirage.

It remains to be seen if Lapid’s strategy will pay dividends — whether it will cost him in the coming Israeli elections or whether his words will evaporate into the dustbin of history, as did many such references by Israeli leaders in the past.