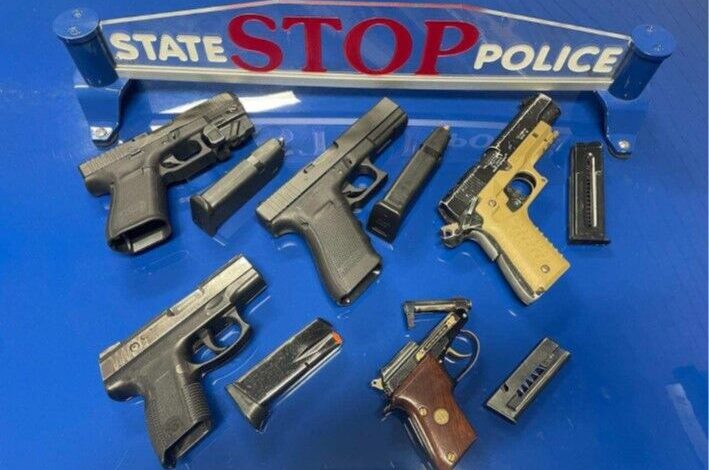 LANSING — A statewide crackdown aimed at reducing gun violence by getting illegal guns off the streets and away from people who cannot legally be in possession of a gun due to prior criminal history has led to hundreds of guns being taken off the streets.

Since the Operation Safe Neighborhoods began, law enforcement officials have conducted 1,289 check-ins with felony offenders, leading to 171 illegal guns being taken off the streets before they could be used in commission of a crime, Governor Whitmer’s office said this week.

The state says one in three reported violent crimes in Michigan involves a firearm and in the first half of 2022, more than 450 Michiganders have lost their lives due to gun violence.

As part of the Operation Safe Neighborhoods, Michigan Department of Corrections parole and probation agents teamed with local law enforcement across the state to conduct enhanced compliance checks on probationers and parolees who are legally prohibited from possessing a gun.

There are roughly 32,000 probationers and 8,500 parolees in the state, of which 20 percent have been convicted previously of a gun crime, Whitmer’s office said. These individuals are supervised by more than 1,000 MDOC parole and probation agents. The plan the department devised and implemented is aimed at the strategic targeting of high-risk individuals who have weapons possession in their criminal history that could be used to commit further crime.

A bipartisan budget signed by the governor in July has some $670 million in public safety funds. The investment brings the total funding for first responders and public safety initiatives under the Whitmer-Gilchrist administration to $1,056,267,100.

Whitmer also signed the bipartisan “Clean Slate” legislation to help hundreds of thousands of Michiganders with criminal backgrounds expungements get a chance at fair housing and job opportunities.

Crime and public safety are central issues in Republican versus Democratic debates from municipal to state level elections this year. Violent crime did spike in 2020 and 2021 in the state, with Michigan ranking 17th in the highest crime rate spike in the country. Whitmer’s opponent in the November election, Tudor Dixon, has blamed the Democratic governor for the spike.

Whitmer has retorted by saying that crime is a national issue and has acknowledged that more needs to be done. National inflation and economic and social stress brought on by the COVID-19 pandemic has been a factor in crime rates, according to experts. In a recent debate again Dixon, Whitmer made clear that a governor cannot fix global inflation, “but what I can do is put more money in your pockets.”

“Together, we have invested over $1 billion in public safety, sent local governments more resources than they have received in decades to hire and support law enforcement officers and doubled secondary road patrols,” Whitmer said regarding the operation to take guns off the street. “Let’s keep working with law enforcement and bipartisan state and local officials to make record investments in public safety, reduce crime and prevent gun violence in Michigan.”