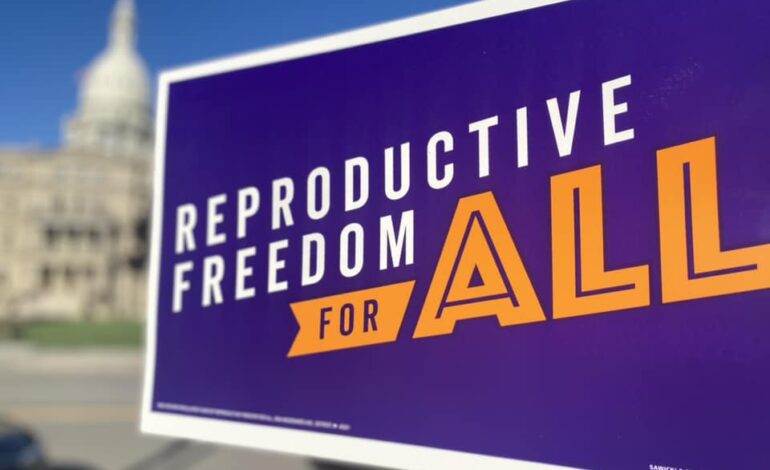 Photo via Reproductive Freedom For All/Facebook

A proposal to enshrine in the state’s constitution guaranteed protections over reproductive health such as pregnancy, prenatal care and abortions has seen some growing opposition in Dearborn.

Recently a pamphlet put out by Dearborn Parents for Principled Civic Engagement appeared in English and Arabic with claims that the proposal, if adopted by voters on November 8, would do away with protecting parental rights and even sexual consent laws and essentially legalize pedophilia.

Prosecutors and legal experts have joined medical experts to fight what they say is blatant misinformation from Republicans to defeat Proposal 3.

The arguments against the ballot proposal in Dearborn are ones that have have shown up in ads and social media in the rest of the state.

Republicans have to tried to challenge the proposal at its petition stage, even challenging the spacing between words in its text. Michigan’s Supreme Court stymied that effort earlier this year.

The proposal comes out of efforts from Reproductive Freedom For All (RFFA), which submitted roughly 750,000 signatures. The Department of State accepted 596,379 valid signatures, 146,228 more than the minimum threshold for certification.

The Pew Research Center’s poll on abortion in the state shows 54 percent support abortion freedom in all or most cases. Even 22 percent of Republicans in that study support that freedom. A late October WDIV/Detroit News poll showed the majority of Michiganders support Prop 3, though the race is tight.

The debate has become a key point in the state’s gubernatorial race. But in Dearborn, Republicans have also found an inroad in the heavily Democratic-leaning voting base after outrage over certain sexual explicit and LGBTQ-oriented educational materials in schools. The anti-Prop 3 fact sheet coincides with that controversy.

“The thinnest of reads”

RFFA recently sought out state prosecutors to clarify how the proposal only encompasses reproductive rights, virtually bringing the state back to the legal landscape around abortions that was upended with U.S. Supreme Court decision to overturn Roe v. Wade.

The proposal would also block a 1931 law that would make abortions illegal, even in the case of rape or incest, and would prosecute medical professionals for performing necessary or elective abortions. Right now, that law is blocked by two lawsuits.

But critics, including in Dearborn, say the language of the proposal is too open-ended. To be sure, ballot proposals are by necessity concise, though a voter can look at detailed texts and legal background on proposals through the Department of State website.

Though the proposal is clear that it only takes action on pregnancy and abortion, the fact sheet distributed in Dearborn claims that it will elevate gender affirming procedures to the right to reproductive freedom, or make it so that parents will not have the option to opt their child out of sex ed courses in school.

The argument seems to hinge on the fact that the proposal means to establish a new individual right to reproductive freedom without clarifying whether it applies to adults or children.

But local prosecutors recently affirmed that parental consent will remain under Prop 3.

The idea that Prop 3 would have anything to do with age of consent laws is beyond frivolous… There’s no legal term for it, so I’ll call it what it is; it’s nonsense. — Eli Savit, Washtenaw County prosecutor

“The idea that Prop 3 would have anything to do with age of consent laws is beyond frivolous,” Washtenaw County Prosecutor Eli Savit told The Arab American News in a call with reporters. “With respect to the language extending the right to all individuals, that is something that is standard practice when dealing with constitutional rights. There are virtually no constitutional rights that say ‘this is a right for an adult, but not for kids.’ But you regularly interpret those rights differently in the context of childhood, so that argument, which is based on the thinnest of reads, does not hold up. All of the rest of these arguments don’t hold up.”

Savit said the claims that the proposal would undermine parental rights, guarantee abortion on-demand or invalidate age of consent laws simply have no legal bases.

“There’s no legal term for it, so I’ll call it what it is; it’s nonsense and has no basis anywhere in the text of the amendment,” he said.

Savit explained that the Second Amendment of the U.S. Constitution provides that the right “of the people” to bear arms cannot be infringed, not that the rights “of adults.”

“But despite that, we recognize that we can regulate that right differently for children, and so a 5-year-old can’t just buy a handgun,” he said.

Similarly, the 14th Amendment provides all persons equal protection under the law, but the law regularly treats kids and adults differently based on age; that’s why children can’t get a driver’s license or vote.

Legal experts and doctors say the proposal, if passed, would keep in effect any law around parental consent and medical standards that are already in place within the state’s legal framework.

The proposal’s full text says that an “individual’s right to reproductive freedom shall not be denied, burdened, nor infringed upon unless justified by a compelling state interest.”

We do not ever have the right to do something without the consent of a parent when it comes to giving medical care to a child. — Dr. Melissa Bayne

“We do not ever have the right to do something without the consent of a parent when it comes to giving medical care to a child,” Bayne said. “And that includes reproductive care, hormone care, pregnancy care. Our patients need parental consent when they are minors to navigate complex health care decisions.”

Bayne said that the opposition’s messaging has given those people who would vote to uphold the state’s 1931 law an out.

“It’s given them an out to be able to say, ‘I voted “no” because it’s confusing, it’s extreme’, instead of saying that they are voting ‘no’ because ‘I believe that this 1931 law should be in place and I think that women should go to jail for getting reproductive care’, because it’s not in vogue right now to say that,” she said.

The proposal’s language does not include any wording on gender affirming surgeries or procedures.

Thee proposal’s language does not automatically strike any of the more than 70 sections of Michigan state law that mention abortion. A 1991 Parental Consent Law says “a person shall not perform an abortion on a minor without first obtaining the written consent of the minor and one of the parents or the legal guardian of the minor.”

Under state law, people under 18 seeking an abortion need written consent from one of their parents or legal guardians, unless they petition the court and prove they are “sufficiently mature” and a waiver to the law would be in their “best interests.”

And according to state law, only licensed physicians can perform an abortion in Michigan.

It is relevant to note that, as Bridge Magazine recently pointed out, while the anti-abortion coalition Citizens to Support MI Women and Children listed 41 state laws — including parental consent — as ones that “could be affected” by the constitutional amendment, the campaign’s TV ads claim those laws would be repealed by the proposal.

Using state-specific abortion data from 2020 to better understand what state abortion bans may mean for maternal mortality rates, researchers expect Michigan to be one of the states with the highest increase in maternal deaths (25 percent), along with Florida (29 percent) and Georgia (29 percent), according to the research.

“This report underscores the horrifying reality that a staggering number of Michigan women will die if our state’s 1931 abortion ban goes into effect,” Governor Whitmer said. “Simply put: the ban will kill moms and women who become pregnant.”

Whitmer and other Democrats have been ramping up efforts to maintain favor in the Arab American community with Republicans gaining ground among conservative Muslims on abortion and school library issues.

The issues has led some Muslim groups to make strange bedfellows with extremist right-wing groups that routinely express Islamophobic views. Recently in Hamtramck, a group of Muslim religious leaders planned a rally against Proposal 3 alongside Church Militant, a designated hate group.

Because my mother could not receive the abortion needed to save her life, we’ve all struggled to live out our lives without her. It left a hole in my heart that will never heal. — Dr. Yahya Mossa Basha

But local Muslims have not taken a monolithic position on abortion.

Earlier this year, Dr. Yahya Mossa Basha, president of Basha Diagnostics, penned a pro-reproductive rights op-ed that detailed how his own mother died at the age of 34 from pregnancy complications and a lack of abortion access in his native Syria.

“Because my mother could not receive the abortion needed to save her life, we’ve all struggled to live out our lives without her,” Basha wrote. “It left a hole in my heart that will never heal.”

Even some high profile Republicans have come out in support of Proposal 3.

William Milliken Jr., the son of the late governor William Milliken, former Republican U.S. Rep. Joe Schwarz and longtime Michigan Republican leader and strategist Jeff Timmer are among those lending their support to the proposal.

Timmer said “healthcare isn’t partisan” and he wants his daughters to access the best care possible during pregnancy.

“The concept that they or their doctors could become criminals because of a pregnancy is insane,” he said.