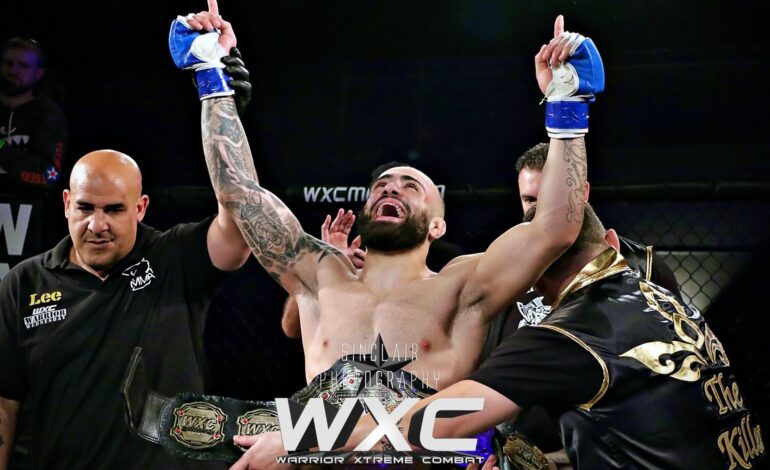 DEARBORN — Dearborn has a rising star in mixed martial arts (MMA) and he’s fresh off a 5-0 record, hungry for more and looking ahead at a bright future in one of the country’s most popular sports.

21-year-old Abe Alsaghir’s story is yet another example of the community’s immigrant, working class roots and its penchant for excellence in athletics and more.

Though some may not be aware, Dearborn already has a budding mixed martial arts scene and it’s those coaches and mentors to whom Alsaghir attributes his success. His family has also played a big part in his rise.

Alsaghir is beyond excited about his current 5-0 fighting record, finishing 4 fights in the first round, two by knockouts and two by submission. He’s fought for the XFC, the B2 fighting series and WXC. Alsaghir migrated to the U.S. along with his family when he was 14. Raised in Lebanon, he graduated from Fordson High School with the class of 2019. He would leave his community for three years for military training, but returned last year and began his fighting career with an official debut last December.

His interest in the sport came out of inspiration from a familiar figure in the community, Dearborn Police officer, striking coach and decorated fighter Ali “The Butcher” Hamka.

“Ali Hamka of Detroit Jiu-Jitsu took me under his wing and set me on the path I am on,” Alsaghir said, with the longer goal to get on major fighting stages at a young age. “Detroit Jiu-Jitsu is my home, that’s where I train.”

Alsaghir said the years of training under his knowledgeable coaches really shines through in the ring. His progress and transformation wouldn’t be possible without those coaches. “The striking you see in the cage is an extension of (Hamka),” he explained. “Coach Anthony Fawaz, co-owner of Detroit Jiu Jitsu, made my game complete so that I am not one-dimensional. The wrestling, groundwork and overall grappling is an extension of him.”

Finally there’s Coach Tony Collino, who has helped Alsaghir with all necessary tweaks with his hands. Alsaghir is also eternally thankful to the “Head Boss” of Detroit Jiu Jitsu, Danny Agemy, and some amazing training partners at Detroit Jiu Jitsu for the support and training over the years.

I can’t help but think that not so long ago my mother, brother and I immigrated to this country with nothing. I had no idea what MMA was when I got here and now here I am working to make it my career. — Abe Alsaghir

Alsaghir feels a debt of gratitude for his family.

“I can’t help but think that not so long ago my mother, brother and I immigrated to this country with nothing,” he said. “I had no idea what MMA was when I got here and now here I am working to make it my career. My brother and I have a construction company. I love him so much for his support, allowing me time to train for camps and never making me feel like my dreams are imposing.”

For those wondering, yes, Alsaghir has his eyes on the UFC cage. For now, the fierce young fighter representing Dearborn in the MMA world wants to keep the momentum going and, “inshallah”, hopes to make it to that venerable fighting stage soon.