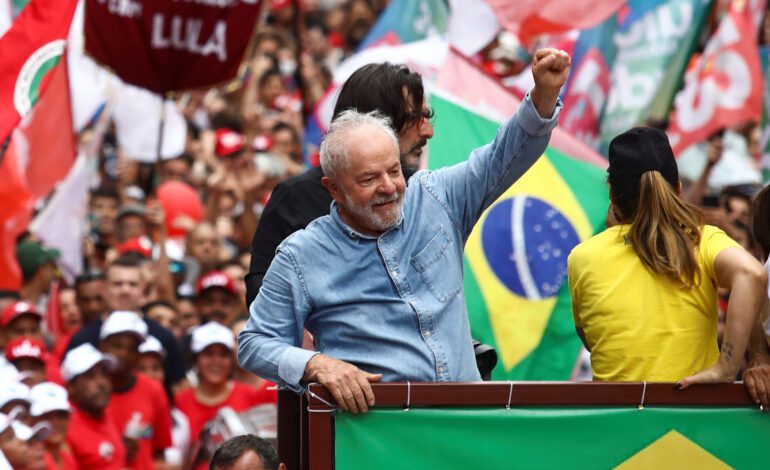 Watching Brazil’s presidential election from the U.S. has been like looking into a funhouse mirror. The image looks a lot like us, for better or for worse.

According to official results, challenger Luiz Inacio Lula da Silva ousted the incumbent, Jair Bolsonaro, and will take office Jan. 1. But the margin was razor-thin: da Silva, a former president known universally as Lula, got 50.9 percent of the vote to Bolsonaro’s 49.1 percent.

Much like Donald Trump in the last U.S. presidential contest, Bolsonaro questioned the legitimacy of the election in advance and has been slow to concede. One could imagine a Brazilian rerun of the Jan. 6 insurrection, when Trump’s supporters stormed the Capitol to block the transfer of power.

Brazil’s election reflected deep divisions between supporters of da Silva, a fiery former labor leader, and Bolsonaro, the bombastic right-wing president. Much like the Democratic and Republican base in the U.S., Brazil’s political factions are separated by an ideological and cultural chasm.

Brazil has a lot in common with the U.S. and it’s not surprising that Brazil’s politics mirror our own. Both are continent-sized nations with large, diverse populations. Both prize individualism and have a robust sense of national pride. Both wrestle with racial issues and the legacy of slavery.

Long a Portuguese colony, Brazil gained independence in 1822, but its experience of vibrant democracy is relatively recent. It was a monarchy for nearly a century, then coffee exporters controlled its economy, followed by a series of populist regimes. After a 1964 coup, the military ruled Brazil for 21 years.

But democracy eventually took hold. Not long ago, Brazil was being touted as a rising power, along with India and South Africa. With their growing economies and democratic governments, those countries were expected to play a greater role in world affairs.

Da Silva, an outspoken leftist, was president from 2003 through 2010, a time of relative prosperity. His policies were credited with lifting millions out of poverty, but his party was plagued by corruption. He was convicted of accepting bribes and spent 17 months in prison. The Supreme Court overturned his conviction, but opponents consider him a criminal.

Bolsonaro, in his one term as president, cultivated support from evangelical groups and cultural conservatives. His take-no-prisoners style earned him the nickname “the Trump of the Tropics”; he and Trump are mutual admirers. Critics consider him an autocrat.

Bolsonaro waited two days to acknowledge election results, while tens of thousands of his supporters took to the streets, blocking highways and even calling for a military takeover. The situation seems unstable and Brazil’s stability matters. The largest country in South America, it has great influence in the region.

Brazil has long seemed to be a nation on a cusp of greatness, never quite managing to reach its potential. Its economy is the 12th largest in the world and it has nearly $100 billion in trade in goods and services with the U.S. Deforestation and agriculture, which accelerated under Bolsonaro, contribute to climate change. But it has moved toward clean energy and the vast Amazon forest, 60 percent of which lies within Brazil, is an important carbon sink that captures greenhouse gases.

All these factors highlight Brazil’s importance to American foreign policy. At the same time, Brazil’s turbulent political history is a reminder of how fragile democracy can be – and how remarkable it is that the U.S. has remained a democracy for nearly 250 years.

The situation in Brazil bears close attention, both because of Brazil’s importance and for the lessons Americans can learn as our 2024 presidential election approaches. If Brazil can manage an orderly transfer of power at a time of deep polarization, we should be able to do the same.