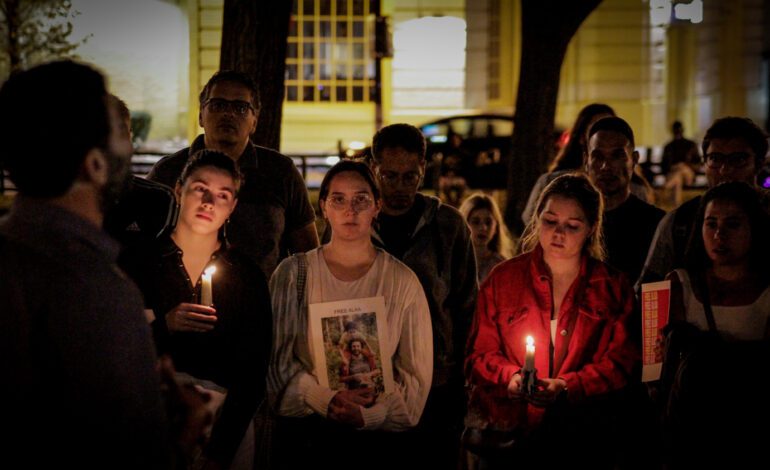 Abd El-Fattah entered the public eye during the 2011 revolution that ousted Hosni Mubarak from power. In 2014, Field Marshal Abdel Fattah el-Sisi —  Egypt’s current president — launched a military coup against Mubarak’s democratically-elected successor, Mohamed Morsi, ending civilian rule. Since then, Alaa has been in and out of prison as Sisi’s regime cracks down on critics of his regime. Abd El-Fattah is currently serving a five-year sentence for allegedly spreading false news — an invention by the Sisi regime.

Abd El-Fattah has been on a partial hunger strike for more than seven months. On Nov. 1, he stopped consuming his daily 100-calorie intake and completely refrained from food. On Nov. 6 — which also marked the beginning of the COP 27 climate summit in Sharm El Sheikh — he stopped drinking water in an attempt to draw attention to his case and pressure the Egyptian regime. He is effectively putting his life at risk, as it is impossible for a human being to survive for more than three days without water.

Mai El-Sadany, a human rights lawyer who attended the demonstration on Monday, said that the D.C. community showed up in solidarity with Abd El-Fattah and his family. “(Alaa) declared a water strike after more than 215 days of hunger strike to protest his treatment, arbitrary arrest, prosecution, failure of Egyptian authorities to investigate his charges (and) failure to get consular access as a British citizen,” El-Sadany said.

Similar demonstrations took place on Monday and Tuesday in New York, Toronto, Beirut, Ramallah, Tunis, The Hague, Vienna and Rome. Across the world, demonstrators called for Abd El-Fattah’s release and that he be reunited with his family.

“This is someone who, for so many of us, is a symbol of the 25 January revolution (of 2011),” El-Sadany added. “He is a really special and beautiful person — it’s his spirit and energy that brought us all here together.”

Activists have used the presence of international leaders and media outlets at the climate summit to direct attention towards the plight of Abd El-Fattah and other political prisoners.

His family says they have not heard from him since his last letter announcing the water strike. His mother, Laila Soueif, said there’s no way to verify whether he is alive. On Monday, she waited for 10 hours outside the Wadi al-Natrun prison — where her son is being held — to receive the weekly letter he is permitted to write. Guards told her that Abd El-Fattah is refusing to release a letter, but she does not believe this to be true. Also on Monday, Egyptian journalists Eman Ouf, Mona Selim and Racha Azab announced that they began a sit-in and hunger strike in solidarity with “prisoner of conscience Alaa Abd El-Fattah, who is battling death, and all prisoners of conscience in Egypt.” They are staging their protest inside the Egyptian press syndicate. They called for the release of Abd El-Fattah and all detained journalists, as well as an end to the regime’s targeting of free speech.

On social media, an online campaign using the hashtag #FreeAlaa has called the U.K., Egypt, and other world leaders attending the summit to secure the release of Abd e-Fattah and other human rights defenders behind bars.

Sanaa Seif, Abd El-Fattah’s sister, has been protesting outside the U.K.’s Foreign Office in London, demanding his release. On Tuesday morning, she participated in a press conference at the COP27 summit and expressed concern for her brother’s condition.

Abd El-Fattah obtained British citizenship through his mother in April. His family hopes that the U.K.’s government is compelled to save one of its own.

The office of British Prime Minister Rishi Sunak has released a statement noting that Abd El-Fattah’s case was raised during a meeting with the Egyptian president on Monday. In a personal letter to Seif, PM Sunak stressed his “deep concern.” However, when confronted by a VICE journalist at COP27 about Abd El-Fattah’s case, Sunak ignored the question.

In Washington, demonstrators huddled around the Dupont Circle Fountain that was set up with signs that said “Free Alaa” for an hour as speakers read excerpts from his book, You Have Not Yet Been Defeated — selected works on protest and freedom, published in April. If we’re not standing up for Alaa and fighting to free Alaa, then there’s going to be no hope for prisoners of conscience around the world. — Fiana Arbab

Yasmeen El-Hasan, an attendee, read “Half an hour with Khaled” aloud — a piece that Abd El-Fattah wrote about his son’s birth. He describes how prison is meant to deprive joy and how holding his son is “continuing the struggle.”

“(His words) speak to me, as a Palestinian,” El-Hasan said. “Alaa speaks for all of us when he (writes) I understand why I will resist.”

“What’s happening with Alaa is a dangerous precedent and (the outcome) will affect all of us,” Abubakr said. “(Governments) like America and Britain have a duty to stop entertaining authoritarians as they hold, torture, and kill citizens.”

Fiana Arbab, a global policy specialist, felt that the fight for civic space in Egypt is also one that exists in the U.S.

“I see a direct connection there… what’s happening in Egypt is a reflection of what’s to come,” Arbab said. “If we’re not standing up for Alaa and fighting to free Alaa, then there’s going to be no hope for prisoners of conscience around the world.”

– Laura Albast is Palestinian American journalist and media analyst. Her publications and appearances include The Washington Post, The New Arab, Al-Jazeera, KPFA, the Black Star Network and other outlets. This article has been edited for style.