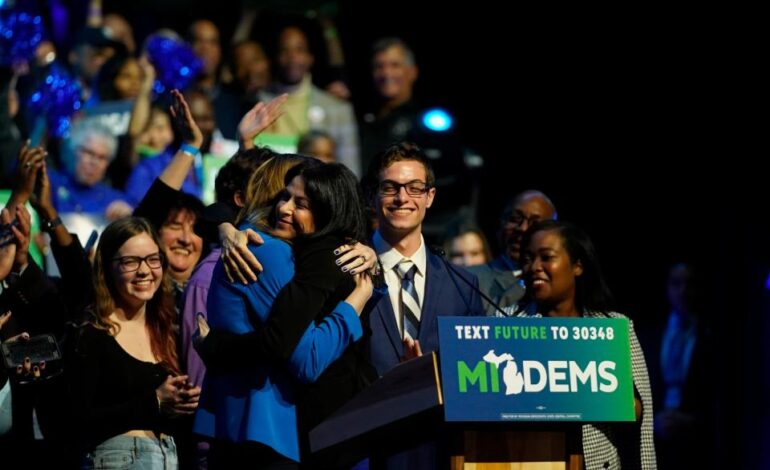 Governor Whitmer enters her second term with Democrats likely to control all levels of power in the State Capitol for the first time since the 1980s and backed by a dramatic show of voters’ support for keystone Democratic issues, including abortion and voting rights.

But even as state Democrats celebrated their sweep of state offices and apparent majorities in the state legislature, Whitmer publicly promised to work with both parties while sprinkling in references to Democrats’ priorities.

“For the next four years, I ask you to believe in Michigan, to work with us and believe in our state,” Whitmer said Wednesday morning in Detroit. “If we do, I know there is nothing we can’t accomplish. I won’t make any predictions for the next four years, but I can promise you this: We will make Michigan a place where you can envision your future.”

Republican challenger Tudor Dixon said in a statement that she had called Whitmer to concede the battleground state’s gubernatorial race. Dixon, a former political commentator endorsed by former President Trump, struggled until late in the campaign to compete with Whitmer’s multimillion-dollar campaign fund.

Whitmer was first elected in 2018 after years in the legislature and has become a leading voice in the Democratic Party, delivering the party’s response to Trump’s State of the Union address in 2020 and becoming a frequent target of his criticism over her COVID-19 regulations.

Michigan voters were slightly more likely to approve than disapprove of Whitmer’s performance, with just over half saying the Democratic governor was handling her job well, according to AP Vote Cast, a survey of more than 3,200 voters across the state.

Democrats also declared that they had won majorities in the state House and Senate, the first time since 1983 both the Legislature and the Governor’s Office will be led by Democrats.

Republican legislative leaders conceded the loss of their majorities. The Associated Press had not called some of those legislative races by Wednesday. The state’s U.S. House delegation will be made up of six Republicans and seven Democrats.

Tuesday marked the first general election use of legislative and congressional district maps drawn by Michigan’s redistricting commission, which set out to create districts that were fairer to Democrats than those created by the GOP-controlled state legislature. Voters approved the creation of the independent commission in a 2018 statewide ballot initiative.

Whitmer’s calls for bipartisanship and unity Wednesday reflect the reality that she still leads a divided state following Democrats’ victories. She pledged that she would be a governor “for all of Michigan” and would work “with anyone that wants to get things done.”

While Michigan has been slow to bounce back from some of the country’s strictest COVID policies, Whitmer has said priorities in her second term include bringing auto jobs back to the state and helping small businesses recover.

The race was among the most contested gubernatorial campaigns of the midterms and Whitmer spent millions on ads attacking Dixon for being too “extreme” on abortion. Dixon has said she opposes abortion in all cases except to save a mother’s life. The strategy went unanswered for months as Dixon struggled to fundraise.

Whitmer also threw her support behind a Michigan ballot measure seeking to enshrine abortion rights in the state constitution and overrule a 1931 law that was triggered after the fall of Roe v. Wade and would criminalize abortion. Michigan Democrats hoped the proposal would lead to high voter turnout statewide and give the party key victories in U.S. House and state legislative races.

While seemingly one-sided for months, a surge in funding from national Republicans and primetime debate performances helped increase Dixon’s name recognition in a state that had a GOP governor just four years ago.

The economy was the top issue on the minds of Michigan voters, with about half saying it is the most pressing matter facing the nation, according to AP Vote Cast.

About a third of Michigan voters said that their family is falling behind financially. Those voters were more likely to cast a ballot for Dixon.

The outcome of the November race is significant beyond Michigan, a presidential election battleground. The winner will be in office for the 2024 contest and could influence voting laws and how the election is conducted.