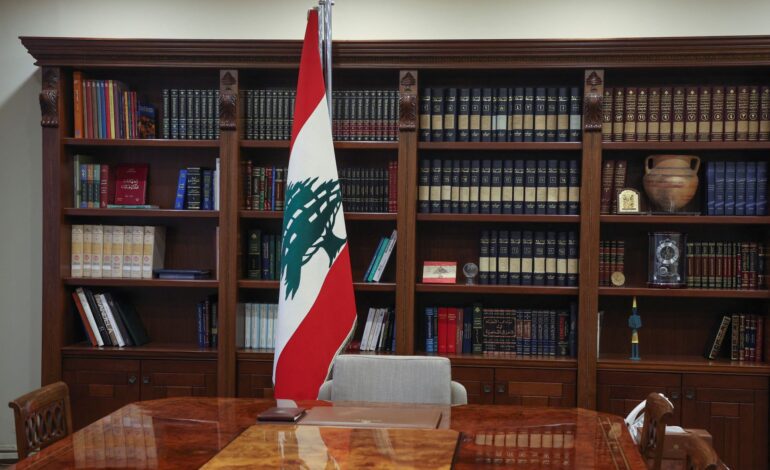 Lebanon faces an indefinite government crisis that further complicates the path out of its financial meltdown, adding to risks of instability as hardship deepens and state institutions teeter on the brink of collapse.

Lebanon has had neither a head of state nor a fully empowered cabinet since Michel Aoun’s term as president ended on Oct. 31 — an unprecedented vacuum even by the standards of a country that has enjoyed little stability since independence.

With politicians showing no compromise in a tussle over state power, some political sources and analysts say a compromise on the presidency may demand the type of foreign mediation that has saved Lebanon from previous such standoffs.

But there is no sign of one for now, and the time may not be ripe. Tensions are high in the region between the powers best placed to mediate — Iran on the one hand, and the U.S., France and Saudi Arabia on the other.

The vacuum marks a new phase in the crisis that has hit Lebanon since its financial system collapsed in 2019, impoverishing swathes of people, paralyzing banks and fueling the biggest wave of emigration since the 1975-90 civil war.

Strains in the bankrupt state are surfacing in new ways all the time, with the government ever more dependent on foreign handouts to perform basic services. The value of salaries paid to civil servants and soldiers has crashed with the local currency, which has collapsed by 95 percent since 2019.

Lebanon has had neither a head of state nor a fully empowered cabinet since Michel Aoun’s term as president ended on Oct. 31 — an unprecedented vacuum even by the standards of a country that has enjoyed little stability since independence.

The army — the backbone of civil peace — is set to start receiving U.S.-funded salary assistance via the United Nations.

France has mobilized vaccines to battle a cholera outbreak, calling it a sign of “the critical decline in public provision of access to water and sanitary services.”

With bank holdups by depositors desperate for their money a regular occurrence, the army has released a training video showing soldiers surrounding a bank and detaining a suspect.

“The social situation is the fuse that can endanger Lebanon — if the vacuum continues, and the crises — financial and economic — get worse,” said Nabil Boumonsef of  the Annahar newspaper.

Washington has sought to bolster the security forces with more aid.

But in a stark warning, a U.S. official said on Nov. 4 she could see scenarios where “there’s just an unraveling, where six months of salary payments to the (army) and the (internal security forces) and all the stop-gap measures we can throw at it, they lose control of things, there’s mass migration.”

Assistant Secretary of State for Near Eastern Affairs Barbara Leaf, speaking at the Wilson Center, said this was “the darkest end of the spectrum” and there were “many other scenarios in between.”

“Nothing we or any other foreign partner can do can take the place of what Lebanon’s own political leaders have failed to do to date — form a government and get to the urgent task of pulling Lebanon back from the brink.” The social situation is the fuse that can endanger Lebanon — if the vacuum continues, and the crises — financial and economic — get worse. — Nabil Boumonsef, the Annahar newspaper

Western governments have been urging Beirut to enact long-delayed reforms needed for Lebanon to emerge from the crisis by sealing an International Monetary Fund deal.

But the IMF has been critical of “very slow” progress. Efforts to enact reforms face obstruction from politicians protecting vested interests and evading accountability.

Analysts see no movement towards agreeing a new administration.

On one level, the standoff reflects rivalries among Maronite Christians, for whom the presidency is reserved.

On another, it reflects a power struggle between the Iran-backed Shi’a movement Hezbollah — which propelled its ally Aoun to the presidency in 2016 — and its opponents, including factions aligned with Saudi Arabia.

There have been signs of renewed interest in Lebanon from Riyadh, which had largely washed its hands of the country after spending billions to carve out influence, only for Hezbollah’s role to grow.

“The Saudi play is about countering Iran and countering a failed Lebanese state,” said Andrew Tabler of the Washington Institute.

The politician said this could help Riyadh exercise sway over the fate of the presidency, decided by a vote in parliament, where Saudi Arabia already has a number of like-minded friends, including the Christian Lebanese Forces party. A picture of Lebanon’s Prime Minister-designate Najib Mikati is placed on a residential building in the northern city of Tripoli, Lebanon, Sept. 23. Photo: Mohamed Azakir/Reuters

The Saudi government did not respond to a request for comment.

Hezbollah has prominent Christian allies with presidential ambitions, notably Suleiman Frangieh — a friend of Syrian President Bashar al-Assad — and Gebran Bassil, Aoun’s son-in-law. It has yet to declare a preference, leaving open the possibility of a compromise over someone more widely acceptable.

Hezbollah not stated a position on Aoun, who has not declared himself a candidate.

In 2008, foreign mediation led to the election of another former army commander, Michel Suleiman, as president, defusing a crisis that ignited conflict between Hezbollah and its opponents.

A source familiar with Hezbollah’s thinking anticipated an indefinite vacuum: “We desperately need a foreign push.”

Druze politician Wael Abou Faour said foreign pressure could play a “facilitating role… but the initiative and the solution must come from internal political forces.”