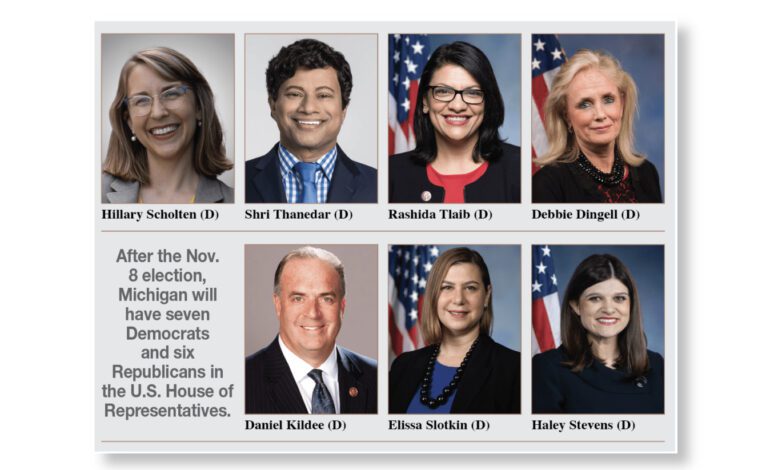 After the state lost a congressional seat from the census and with redistricting causing upheaval to the U.S. House maps, Democrats have broken the tie in the Congressional roster from Michigan and added two new faces.

Thanedar has become the first Indian American from Michigan to win a seat in the U.S. House. He received 71 percent of the vote in the newly-formed District 13, which includes Detroit, Hamtramck, Melvindale and more, while Republican Martell Bivings received 24 percent.

Detroit native Tlaib received 70 percent of the vote in her district, beating out Republican challenger Steven Elliot 196,601 to 72,889 votes.

Redistricting means Tlaib will now get to represent Arab American concentrations in Dearborn and Dearborn Heights, but also new communities like Southfield, Livonia and more.

During a primary where she faced coordinated attacks by corporate interests and right-wing supporters of Israel’s apartheid government and occupation in Palestine, Tlaib told The Arab American News that those goals of standing up to polluters and “having her district’s back” would remain the same.

Here is Tlaib’s full statement issued after her victory on Nov. 8:

I am so grateful for every single voter who turned out and voted for a brighter future for our communities in the new 12th Congressional District and across the state of Michigan. I thank the residents of the Tenacious 12th for putting their faith and trust in me to represent them with 70 percent of the vote. This Election Day, people across the state voted for joy, justice and progress. Our neighbors sent a strong message that we will not allow hate to divide us.

I am proud of our grassroots direct-voter contact-focused campaign. We made it a priority to talk with our neighbors about the importance of turning out to vote to protect reproductive and voting rights, along with electing candidates who are rooted in justice-oriented values up and down the ballot, from school boards and judicial candidates to the governor. For the first time in 40 years, Democrats will hold a majority in the Michigan Senate. In addition, Democrats will control all statewide executive offices and the Michigan House. The 12th Congressional District helped make this happen and I could not be more proud of our neighbors.

During the general election, our team made 655,684 direct calls, messages and connections with voters in the 12th Congressional District. This is in addition to knocking nearly 30,000 doors and making over 120,000 phone calls to voters during the primary election.

To the Tenacious 12th, I cannot thank you enough and I look forward to working hard on your behalf in the 118th Congress.

After representing Dearborn for eight years, Dingell won the election for the newly-formed District Six with 241,763 votes over Republican Whitney Williams, who received 125,168 votes.

Dingell, widow of the late long-serving U.S. Rep. John Dingell, has been closely associated with Dearborn and surrounding areas, which ties into her late husband and predecessor’s long political legacy in the area.

The newly-drawn Congressional district includes all of Washtenaw County and stretches downriver to significant parts of Wayne County. She will continue to serve Arab American concentrations in cities like Ypsilanti, Ann Arbor, Northville, Novi, Canton and more.

The Arab American community and the city of Dearborn held separate events honoring Dingell for her service to the city on Oct. 10 and 24 at LaPita Banquet Hall and the Ford Community and Performing Arts Center.

“She’s been instrumental in improving the quality of life here in the city of Dearborn, and so, Debbie, from the bottom of my heart as Abdullah from Dearborn I thank you for your years of service,” Dearborn Mayor Abdullah Hammoud said at the event.

Late Tuesday night, as results showed Dingell to be the presumed winner, she thanked voters for showing up.

“Our Democracy is stronger when everyone participates,” Dingell said over Twitter. “It is an honor to represent you, and I look forward to working for the people of Southeast Michigan for another two years.”