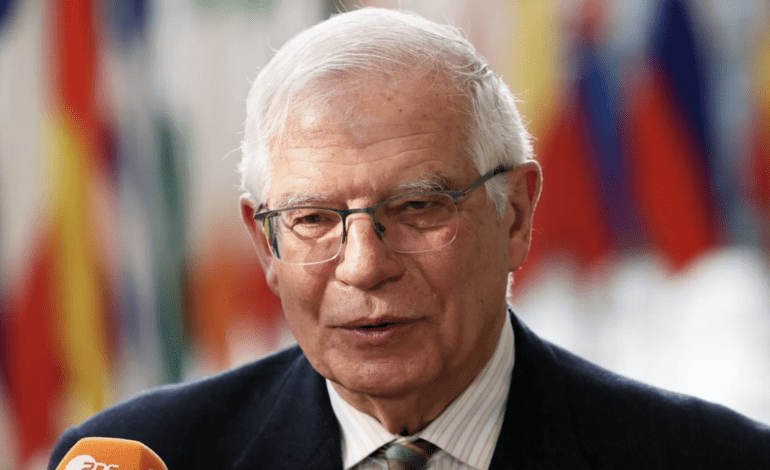 The European Union’s Foreign Policy Chief Josep Borrell is not particularly perceived by the EU’s political elite or mainstream media as a right-wing ideologue or warmonger. But seen through a different, non-Western prism, it is hard not to mistake him for one.

Borrell’s recent comments that “Europe is a garden” and that “the rest of the world is a jungle” were duly condemned as “racist” by many politicians around the world, but mostly in the Global South. Borrell’s remarks, however, must also be viewed as an expression of superiority, not only of Borell personally, but of Europe’s ruling classes as a whole.

Particularly interesting about the EU top diplomat’s words are these inaccurate depictions of Europe and its relationship with the rest of the world: “We have built a garden”, “everything works” and “the jungle could invade the garden.”

Without delving too deep into what is obviously an entrenched superiority complex, Borell speaks as if an advocate of the so-called “Replacement Theory”, a racist notion advocated by the West’s — Europe especially — right-wing intellectuals, which sees refugees, migrants and non-Europeans as parasites aiming to destroy the continent’s supposedly perfect demographic, religious and social harmony.

If stretched further into a historical dimension, one also feels compelled to remind the EU leadership of the central role that European colonialism, economical exploitation, political meddling and outright military intervention have played in turning much of the world into a supposed “jungle.” Would Libya, for example, have been reduced to the status of a failed state if the West did not wage a major war starting in March 2011?

High Representative of the European Union Josep Borrell’s recent comments that “Europe is a garden” and that “the rest of the world is a jungle” were duly condemned as “racist” by many politicians around the world.

The imagined “jungle” aside, Europe’s past and present reality strongly negates Borell’s ethnocentric view. Sadly, Europe is the birthplace of the most horrible pages of history, from colonialism and slavery to the nationalistic, fascist and nihilistic movements that defined most of the last three centuries.

Despite the desperate attempt to rewrite or ignore history in favor of a more amiable narrative focused on great splendors, technological advancement and civilizational triumph, Europe’s true nature continues to smolder underneath the ashes, ready to resurface whenever the geopolitical and socioeconomic factors take a wrong turn. The Syrian and Libyan refugee crisis, the COVID pandemic and, more recently, the Russia-Ukraine war are all examples of the proverbial wrong turn.

In fact, Borrell’s words, aimed to reassure Europe of its moral superiority, are but a foolhardy effort meant to conceal one of the most dramatic crises that Europe has experienced in nearly a century. The impact of this crisis on every aspect of European life cannot be overstated.

In an editorial published last September on the European Environment Agency (EEA) website, Hans Bruyninckx described the “state of multiple crises” that characterizes the European continent at the moment. “It seems as if we have been living through one crisis after another — a pandemic, extreme heatwaves and drought due to climate change, inflation, war and an energy crisis,” he wrote.

Instead of taking responsibility for this impending catastrophe, Europe’s ruling elites choose a different, though predictable route: Blame others, especially the inhabitants of the non-European “jungle.”

Naturally, ordinary people throughout Europe who are already experiencing this harrowing reality hardly feel reassured by Borrell’s proclamation that “everything works.”

The risk of the resurgence of the far-right movements in Europe is now a real possibility. This danger was relatively mitigated by the setback of the extremist “Alternative for Germany” and the victory of the Social Democrats in last year’s elections. Germany, however, is not the exception, as the European far-right is now back, virtually everywhere, and with a vengeance.

In France, Marine Le Pen’s far-right party gained a record 41 percent of the total vote (over 13 million) in April. True, Emmanuel Macron managed to hold off the advance of Le Pen’s National Rally, but his coalition has lost its parliamentary majority and his leadership has been significantly weakened. Currently, the country is rocked by massive rallies and strikes, all protesting the soaring prices and deepening inflation.

Europe’s extremism is a by-product of exclusively European historical experiences, ideologies and class struggles. Blaming Asians, Arabs or Africans for Europe’s “state of multiple crises” is not only self-deluding, indeed spiritless, but also obstructive to any healthy process of change.

Sweden is another example of the determined rise of the far-right. A right-wing coalition, which won the general elections last September, now dominates the country’s parliament. On October 17, it elected a new prime minister, Ulf Kristersson, whose government was made possible because of the support of the Sweden Democrats, a party with neo-Nazi roots and a harsh anti-immigration agenda. SD was crucial in determining the victory of the coalition and it is now suited to play the role of the kingmaker in critical decisions.

In Italy, too, the situation is dire. A future government is expected to bring together Giorgia Meloni — the leader of Fratelli d’Italia (Brothers of Italy) — former right-wing Italian Prime Minister Silvio Berlusconi’s party, Forza Italia, and the extremist Matteo Salvini’s La Lega. Meloni’s party is rooted in the post-fascist tradition of the Italian Social Movement, which was formed in the aftermath of World War II by fascist politicians after their party was officially outlawed by the country’s progressive 1948 Constitution.

The shifting political grounds in Germany, France, Italy and Sweden have little to do with the “jungle” and everything with the illusory European “garden.” Europe’s extremism is a by-product of exclusively European historical experiences, ideologies and class struggles. Blaming Asians, Arabs or Africans for Europe’s “state of multiple crises” is not only self-deluding, indeed spiritless, but also obstructive to any healthy process of change.

Europe cannot fix its problems by blaming others, and the European “garden”, if it ever existed, is actually being ravaged by Europe’s own ruling elites — rich, detached and utterly dishonest.

— Romana Rubeo, an Italian journalist, contributed to this article.