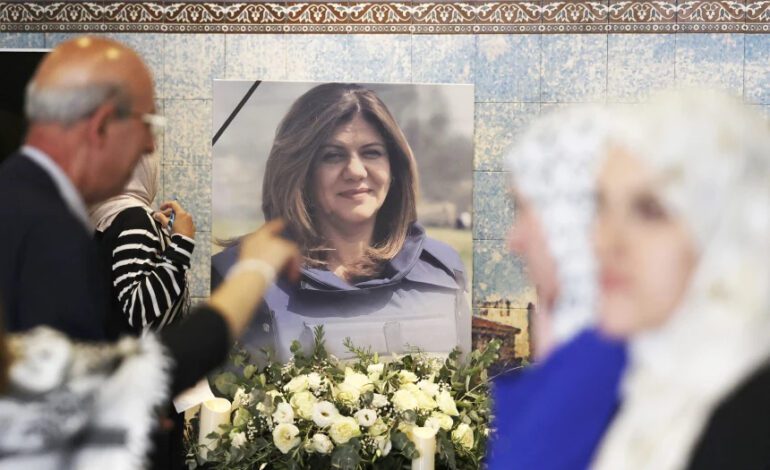 The U.S. Department of Justice has decided to investigate the killing of renowned Palestinian American journalist Shireen Abu Akleh, with Israel saying it does not plan to cooperate.

The investigation by the FBI comes after months of pressure from rights groups, Democrats and Abu Akleh’s family on the Biden administration to push Israel to provide answers and accountability for the killing of journalist by one of its occupation soldiers.

The Associated Press said a Justice Department spokesman had no comment and there were no details about when an investigation might begin and what it would entail, nor what the ramifications of it might be.

Though Israel initially denied responsibility and even attempted to blame Palestinian fighters for Abu Akleh’s death, it was forced to concede after independent investigations that she was killed by an Israeli soldier, though it said the killing may have been “accidental.”

The Al Jazeera reporter was wearing a bulletproof vest marked “press” and a helmet when she was shot in the head in the Jenin refugee camp. Her killing led to global outrage and independent investigations that showed Israeli forces were behind the murder. These investigations were made by the United Nations and international media outlets like Al Jazeera and The Associated Press.

Israeli occupation forces have been known to directly target journalists as shown in international media organization reports. Abu Akleh was covering the raid of a Palestinian home in the refugee city of Jenin in the occupied West Bank when Israeli forces opened fire on her and her colleagues, killing her and injuring another.

Though Israel finally acknowledged one of its soldiers did in fact kill Abu Akleh, it has pushed back against suggestions of prosecuting the soldier who likely shot her.

Israel is now in the midst of the most far-right political transformation with the reelection of former Prime Minister Benjamin Netanyahu, who still faces multiple charges of corruption.

On Thursday, Netanyahu and his far right political ally Itamar Ben-Gvir discussed a plan to legalize dozens of illegal settler outposts in the occupied West Bank. All Israeli settlements, including outposts, are illegal under international law. The Al Jazeera reporter was wearing a bulletproof vest marked “press” and a helmet when she was shot in the head while covering a raid on a home in the Jenin refugee camp by Israeli occupation forces.

In recent days, especially with the killing of Abu Akleh and genocidal attacks in Gaza by Israel’s military, some progressive Democrats have reawakened conversations around the U.S.’s partnership with Israel’s apartheid government.

“We will not allow interference”

The new FBI probe would be an unprecedented step that would strain the relationship between the U.S. and Israeli governments and challenge Israel’s claims that it has its own system of holding soldiers accountable for harm done to Palestinian civilians.

Israel’s Defense Minister Benny Gantz called the investigation a “grave mistake” and vowed not to cooperate.

“We will not allow interference in Israel’s internal affairs,” Gantz said.

“It is good that this first step has been taken, that the FBI is investigating the murder of an American journalist and citizen by foreign forces,” said ADC Executive Director Abed Ayoub.

The Council on American-Islamic Relations (CAIR) also welcomed the news.

“We welcome this long-delayed investigation and hope our nation will finally hold Israel accountable for its violence targeting American citizens, journalists and other civilians in the territories it occupies illegally,” said CAIR Government Affairs Director Robert McCaw. “Violence is the inevitable result of Israel’s apartheid policies, human rights abuses and continuing occupation of Palestinian land.”

Earlier this year, CAIR condemned the State Department’s “shameful refusal” to hold the Israeli government accountable for murdering Abu Akleh following its “welcoming” the Israeli military’s report that concluded there was a “high probability” that an Israeli soldier unintentionally killed her during a raid in the West Bank.

“Cautiously optimistic,” tweeted University of Detroit Mercy law professor and Palestinian activist Amer Zahr. “But make no mistake. This is the result of people, especially Palestinians, keeping Shireen’s name on the tips of our tongues. And no one deserves more credit than her family,

Cautiously optimistic. But make no mistake. This is the result of people, especially Palestinians, keeping Shireen’s name on the tips of our tongues. And no one deserves more credit than her family, @LinaAbuAkleh @aa_lareen and others