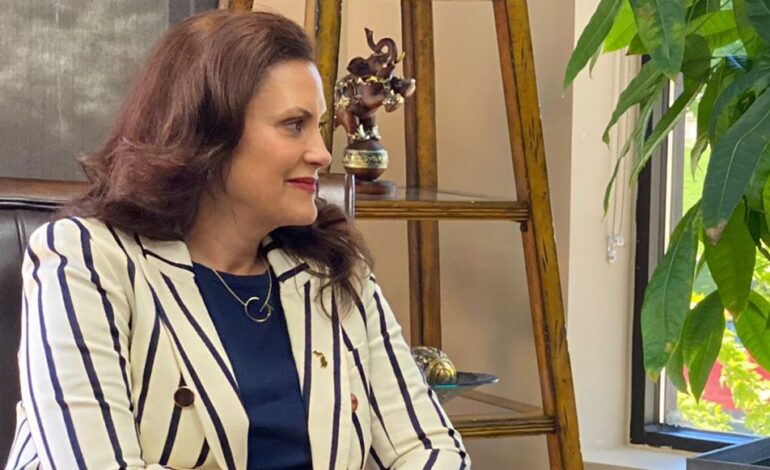 DETROIT — Fresh off a double digit election victory over a Trump-backed candidate, Governor Whitmer spoke at the 50th anniversary gala for ACCESS in Detroit on Thursday.

More than 1,000 people attended the half-a-century celebration at the Marriott hotel in the Renaissance Center for an organization that began as a modest, volunteer-run effort to support the area’s growing immigrant population out of a small storefront in the Southend of Dearborn.

ACCESS has since grown to now have 10 locations and more than 120 programs in Metro Detroit offering a wide range of social, economic, health and educational services.

Included among the night’s speakers were Dearborn Mayor Abdullah Hammoud.

Whitmer thanked those who attended the fundraising dinner for ACCESS.

“Thank you once again for the incredible investment that you’ve made in supporting ACCESS,” she said.

Whitmer won Michigan with an 11 point margin over Republican Tudor Dixon in the Nov. 8 general election, with reproductive rights on the table for voters in the form of a ballot proposal and against an onslaught of outlandish conspiracies by Republicans over the election system in the state.

We take no vote, no community, no person for granted.  — Governor Whitmer

Republicans recently attempted to make inroads in Dearborn over educational books in schools that were oriented towards the LGBTQ+ community or discussed sexuality openly, and around Proposal 3, which enshrines abortion rights in the state’s constitution.

But Democrats kept their long-held margins in the city, with some 30,000 residents casting early and Election Day votes and selecting Whitmer by 64 points over Dixon’s 34. Proposal 3 also won in Dearborn 59 to 41 points. Democrats also took control of the state’s legislature and now, for the first time since 1983, hold the the governor’s mansion and both legislative chambers.

Whitmer sat down with The Arab American News on Thursday during the ACCESS gala to talk about her administration’s plans going forward with the renewed control in Lansing. She also reflected on some unprecedented times served during a global pandemic.

“I felt good going into Election Day; we stayed focused on the issues that I thought mattered and I felt good about the vision that we’ve had and the foundation we’ve laid for the state,” she said. “But everything is so volatile and we take no vote, no community, no person for granted.”

Whitmer said winning by an 11 point margin was an affirmation of that focus and that the new legislature would give the administration a new opportunity to realize the potential of the moment, and be good partners going forward.

“Now is the time to put our foot on the accelerator, whether it’s ensuring that there are good paying jobs for generations of Michiganders to come; or individualized tutoring that is so important to ensuring that every child’s individual needs are met and Michigan gets to that goal of being a top 10 state for literacy or continuing our work on infrastructure,” she said. “These are the things that will determine someone’s ability to become a prosperous person in the state no matter where you come from, what you look like, how you worship or who you love.”

In Michigan and around the world another virus has health care professionals on high alert.

According to health data, 1 in 55 deaths of otherwise healthy children under the age of 5 around the world is due to a common virus that’s currently surging — respiratory syncytial virus or RSV. In Michigan, pediatric hospitals across the state are strained due to the illness.

What we saw during COVID was this incredible misinformation campaign that has undermined people’s confidence in science. It’s really distressing because science is how we save lives. — Governor Whitmer

Republicans rallied around the lockdowns recommended public health officials during the peak of COVID-19 as a campaign point; and though many Republican officials themselves took precautions like vaccinations, the voting base largely remained doubtful of those same precautions.

“Our local public health officers have been on the front lines; they are the people that have been respected, revered and listen to,” Whitmer said. “What we saw during COVID was this incredible misinformation campaign that has undermined people’s confidence in science. It’s really distressing because science is how we save lives. Access to vaccines or the ability to make informed decisions about our bodies or our health is so fundamental about who we are and how we thrive as a state and a nation.”

Whitmer said she worked hard to combat that misinformation and prioritized showing gratitude to frontline health care workers. She said she is hopeful that a majority of people listen to respected health care professionals.

“If a child or a family has RSV, the first call is still to a family doctor, it’s still a person that is trusted and respected,” Whitmer said. “Politicians who are trying to serve themselves… are dangerous, whether it’s undermining an election or undermining public health measures and we saw a round rejection of that in this last election. And that gives me hope, but it’s on all of us to demand better and show the reverence for public servants who stay on front lines in the toughest times.”