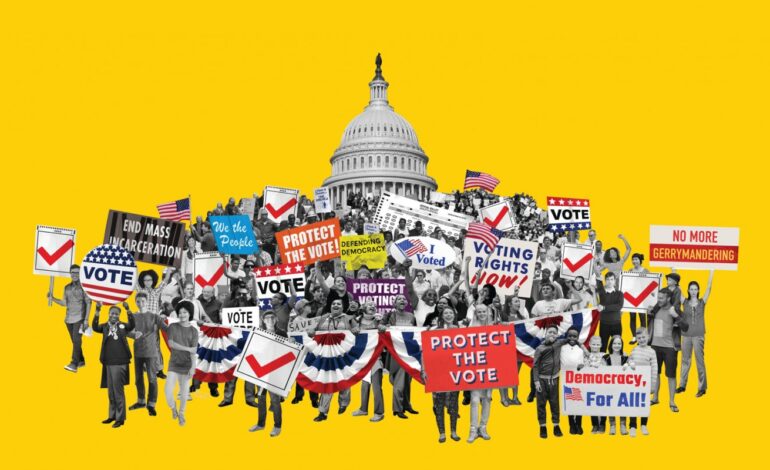 Despite new laws to keep people from voting and gerrymandering election districts to take away the power of minority communities, the Republican “red wave” that pollsters predicted ahead of last week’s midterms didn’t happen.

Ethnic Media Services debriefed six experts on their reactions to the election results and what should be done to prepare for the 2024 election.

“Voters of color were very concerned about the state of their lives beyond the economy,” said Sergio I. García-Rios, assistant professor at the University of Texas at Austin and former director of polling and data at Univision News. “A second concern in all of our polls was gun safety and mass shootings and also security along the border.”

García-Rios said that President Biden’s message about saving democracy resonated with voters of color concerned about rising extremism. But they also sent Democrats a message: “We’re disappointed with both parties.”

“We noticed that there’s an increasing number of independent voters among the Asian American electorate, 35 percent overall, and the Chinese actually had the largest percentage… at 47 percent,” Chen said. “Even the Vietnamese, who support Republicans at a higher rate than any other Asian ethnic group, are losing party identification to independents.”

“We were voting up and down ballot for Black women,” she said.

Voter intimidation, meanwhile, did not prove to be a major issue this election, says Gowri Ramachandran, senior counsel of the Brennan Center’s Democracy program.

“We had law enforcement leaders in some communities coming out and saying, look, intimidation of voters and of election workers is not going to be tolerated,” she said.

Exit polls showed Republicans gaining ground in support among African Americans, Latinos and Asian Americans. While support for Democrats remained high among women and young voters, Cottman echoed those who say Democrats spent too much time trying to flip predominantly White districts instead of investing resources in communities of color.

While Democrats maintained control of the Senate following a narrow win this weekend by Nevada’s Catherine Cortez Masto, control of the House remains in question, though Republicans have the advantage.

Common Cause National Redistricting Director Kathay Feng says extreme gerrymandering was a decisive factor in Republicans’ strong showing in states like Ohio and Florida and will be key should they retake the House.

In red states where the state legislature controls redistricting and Republican governors approve the maps they draw, the fight for fair maps is a David vs. Goliath proposition. But in North Carolina and Minnesota, courts forced district maps to be redone. And in New Mexico, Native Americans threatened to blockade the commission if it didn’t redraw the Navajo districts. They did so.

Feng, who has been at the center of efforts to challenge partisan gerrymandering through litigation and state-based organizing around ballot initiatives and legislation, says citizens have been able to get maps drawn fairly where election commissions do the redistricting.

“Across the board we saw many improvements,” she noted, pointing to states like California, Michigan and Colorado.

In Michigan, voters passed a measure in 2018 to create an independent Redistricting Commission. It has made a big difference there. State Representative Joe Tate is likely to become the first Black speaker of the Michigan House. In Detroit and nearby suburbs, an African American is going to be representing this district for the first time in Washington. And in Michigan’s 12th Congressional District, incumbent Democrat Rashida Tlaib, who is Palestinian American, will be representing her newly configured district.

In Colorado, the Citizens Redistricting Board meeting for the first time drew a Congressional district with a 40 percent Latino population.

Feng drew a sharp comparison with the growth of Latino populations in Texas and the Black population in Florida.

“Those communities were sliced and diced up so that the growth was not represented, or the historic representation was essentially dismantled,” she said. “So, we see a significant difference between the states that have commissions of some form or another and those that do not.”

“You don’t want to know what’s in there. You don’t want to look at it. And when it bursts, it’s a mess. And that’s why you’ve got to fix it before you have that disaster… and because so many communities participated in redistricting, this time round, we saw a lot of that plumbing get fixed.”