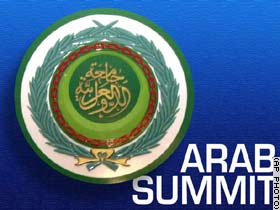 The rapid, almost hasty, developments on the Arab Israeli front, almost immediately following the Saudi sponsored Makkah Agreement on February 2, should be examined in their proper context, as a part and parcel of the regional shifts, exacerbated by the U.S. war in Iraq and the dramatic adjustment in Iran’s position vis-ŕ-vis the region and its sectarian, religious composition.

Two prevailing analyses have been offered; one that is skeptical, and argues that the Arab initiative was brought back to the scene on the behest of the U.S. administration: by engaging Hamas, Arabs will deny Iran the opportunity to further galvanize its regional alliances — Syria and Hizbullah — against the U.S. and Israel, thus further cementing the Shi’a crescent, at the expense of the Sunni majority.

The other analysis is overtly optimistic, ranging between the views of Palestinian and Arab commentators talking of a “historic opportunity” and Western commentators wondering if the League has finally taken charge of the Arab people’s own destiny. “Worried by what they see as the Bush administration’s failings, and the new regional power of Iran, the Arabs are struggling to take their destiny into their own hands,” is how BBC Middle East analyst Roger Hardy worded the conclusion of his analysis, “Mid-East Package Diplomacy.”

The Arab peace initiative, offering full normalization of relations with Israel in simultaneous exchange for an Israeli pullout to the pre-1967 border, was made public in a March 2002 Arab League summit in Beirut. It came at the height of the Palestinian uprising. The initiative was immediately rejected by the Israeli government and accepted by Arafat. Its release was cause for slight discomfort for Israel, however, principally because the Bush administration viewed it in positive terms, at the beginning at least, before it disowned it at Israel’s incessant rejection.

In the weeks preceding the official announcement of the Arab Peace Initiative, Israel had assassinated Fatah leader Raed al-Karmi in Tulkaram in the West Bank, prompting Palestinian suicide bombings. “Karmi’s assassination led to the scuttling of the truce that had lasted since December 16, 2001,” wrote Akiva Aldar in “Ha’aretz,” quoting Mati Steinberg, who was the adviser on Palestinian affairs to the head of the Shin Bet security service. “It also led to Operation Defensive Shield, which pushed the Arab initiative to the margins and eliminated the opportunity to put the Palestinians on the diplomatic track with the Arab peace initiative for the first time.”

But the Middle East of those days is in many ways different from today’s regional realities. Although Israel’s colonial project is pursued with the same level of determination (the imprisonment wall, the settlements, the collective punishment and so forth) Israel’s regional reputation as a formidable military power received a significant blow when its army couldn’t advance more than a few miles against stiff Lebanese resistance, led by Hizbullah in the 33-day war of July-August 2007. Neither Israel nor the U.S. were willing to concede to the fact that the ferocious Lebanese fight had much to do with the people’s strong belief in a just cause. Instead all fingers were pointed at Iran: the head of the snake as far as America’s neoconservative clique are concerned. Iran understood that Hizbullah’s victory would discourage, slow down or completely repeal an American military adventure against its own domain. Naturally, Hizbullah’s defeat, relying mostly on Iranian arms, would eliminate the first line of Iran’s defenses and inspire Washington’s hawks, in constant coordination with Israel, to prepare the public and government for a war against Iran. Not that a war against Iran is no longer on the agenda; to the contrary, something will be done to confront the Iranian “threat.” But one has to understand that Israel cannot possibly allow for another regional bully, aside from itself, to claim an inch of what it believes is its rightful domain. It was this logic, as articulated by Richard Perle in a set of recommendations made to then-Likud leader Benjamin Netanyahu in the infamous “A Clean Break” memo, that envisaged the Iraq war as a strategic Israeli imperative. Iraq or Iran, Sunni or Shi’a, are all irrelevant semantics, in Israel’s view. However, the failure to “contain” Iran, coupled with the disastrous American war strategy in Iraq, which has given rise to powerful Shi’a groups with direct links and allegiance to Tehran, is sending Israel’s military and policy planners to the table to study their future options.

Israel and its supporters in America are obsessed with Iran. In the well-attended AIPAC conference Israel’s many friends judged every U.S. official there based on their position on Iran and the terrifying possibility of an early pull out from Iraq. Neglecting the first or proceeding with the second, they argue, will bode disaster for Israel’s security. Thus, when House Republican leader, Rep John Boehner of Ohio, addressed the conference, defending the current war strategy, he received a standing ovation; but when Speaker Nancy Pelosi — unequalled fan of the Israeli regime — dared to spell out a strategy for withdrawal from Iraq, she was booed, according to the “San Francisco Chronicle.”

The power of the lobby and the persisting influence of the neocons reached new heights when Democratic leaders were obliged to strip from a military spending bill a requirement that the president must gain approval from the Congress before moving against Iran. Pelosi and others agreed to such a removal “after conservative Democrats as well as other lawmakers worried about its possible impact on Israel,” reported ABC News.

With Iran being the unrivaled focus, coupled with serious worries amongst some Arab countries regarding Iran’s rise and its possible destabilization impact on the region, Israel has agreed to a conditional exchange that would allow for an implicit arrangement: to “contain Iran — to Israel’s benefit, stabilize Iraq — to the Bush administration’s benefit, and to introduce a new horizon of peace with the Palestinians — to appease the Arabs. Only the prospect of solving the Lebanon dilemma, says Roger Hardy, doesn’t look promising.

The new horizon of peace — a new term invoked by Condoleezza Rice in her recent visit to the region — is a term that corresponds to the “peace process”: significant enough insofar as it yields a sense of hope, but clever enough for it to guarantee nothing, since Israel, brimming with unprecedented clout in the corridors of power in Washington, will neither give up its grand plans of territorial conversion (annexing the settlements), nor bring to a halt the construction of its encroaching wall, nor surrender an inch from the illegally annexed East Jerusalem, all, predictably key Arab and Palestinian demands.

The Arab initiative seemed deliberately vague on the issue of Palestinians made refugee by Israel in 1948 and 1967, and whose plight is as urgent as ever (considering their systematic targeting in Iraq, 500 murdered to date, and Libya’s decision to deport its Palestinians refugees to Gaza, as thoughtless as this may sound.)

By crossing out the “controversial” elements contained in the Arab initiative and then opening it up for negotiations, Palestinians — now browbeaten with a year of sanctions and near starvation in Gaza — will be taken on another peace goose chase, during which Israeli army bulldozers will hardly cease their determined colonial project. My fear is that Arabs will play along, willingly or not, and Palestinians will be forced to partake in the charade, for their reliance on international handouts for their mere survival will make it impossible to defy U.S.-Israeli regional designs forever.