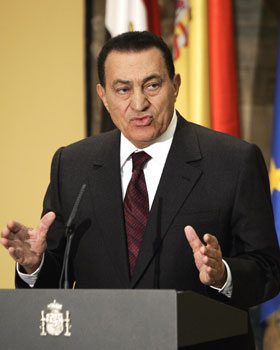 There is a special sadness to the diminution of giants, to great men and countries that choose to stoop low. Egypt, in this respect, mystifies us once again, as its ruling regime resorts to repression and harassment of those who would challenge it politically and demand more democratic governance.

Why a society with such a tremendous reservoir of human talent, historical legitimacy, state credibility, and modern political leadership in the Arab world would need to use authoritarian police state tactics against its own citizens who engage in peaceful politics is one of the great, painful tragedies of the Arab world. Egypt is one of the few Arab countries that can influence the rest of the region, given the power, legitimacy, and respect of its unique legacy of Arab statehood, nationhood, citizenship rights, constitutionalism, and pluralism. To lose Egypt to the emotional and intellectual dungeons of authoritarianism is to lose immense Arab treasure and potential.

I was reading two particular texts last week — James Daugherty’s book “The Magna Charta,” and an article in the current “Middle East Report Online” magazine entitled “Boxing In the Brothers” by Samer Shehata and Joshua Stacher of Georgetown and Syracuse universities, respectively — when I also learned that the prominent Egyptian sociologist and democracy activist Saad Eddin Ibrahim and his colleagues at the Ibn Khaldoun Center for Development were once again being harassed and perhaps threatened.

The Magna Charta of June 1215 limited the power of the king of England and sparked three-quarters of a millennium of democratic transformation and constitutionalism around the world. This reached Egypt, Syria and other Arab lands in the early 20th Century, especially in the 1930s and 40s. The Arab world today, however, is often a landscape of authoritarian excesses, where massive police and security resources preserve the incumbency of the ruling elite and prevent any serious challenge to it. Many Egyptians and other Arabs persist in the spirit of those who promulgated the Magna Charta — ordinary men and women who want only to live in dignity, freedom and equality, who want their authorities to treat them and all citizens with respect and decency.

The Egyptian government in the past three years, however, has stepped up pressure on its critics and challengers, using a variety of traditional means: arrests and harassment, massive police intervention against demonstrators, legal charges that often include long periods of detention, mass arrests, semi-secret military trials, organized press attacks, and, most recently, constitutional amendments that whittle away opposition impact and entrench regime incumbency.

None of this is new or surprising, as the incumbent, military- and security-anchored National Democratic Party (NDP) and its antecedents have used these tactics many times before in the past half-century. What is surprising is why they feel they need to do this. Their Egyptian and Arab reservoir of legitimacy, national cohesion, identity, and regional influence is rich and enduring. They can stand like giants. Why do they choose to stoop so low?

Scores of Moslem Brotherhood members are now on trial again in military court, peaceful student demonstrations are broken up, and activists like Dr. Ibrahim and his colleagues are arrested, threatened and harassed. An active press campaign is underway against Ibrahim and other Egyptian democracy activists. NDP members have filed legal requests to close the Ibn Khaldoun center and try its director and staff on the usual array of quite ridiculous charges, such as treason, harming the national interest, tarnishing the country’s image abroad, and showing contempt for religion.

When I caught up with Ibrahim in a London hotel a few days ago, he confirmed his concern that, based on advice from friends and colleagues in Cairo, a fate worse than jail might await some critics of the government, so he plans to stay out of the country for some time. His age and delicate health would make it hard for him to survive another round of jails, trials and personal abuse.

The government has also revived a tactic that was last used in 2001, which is to try civilians in military tribunals, including 40 Muslim Brotherhood members whose case by the government was initially rejected by civilian courts. Earlier this year the Mubarak government pushed through 34 amendments to the constitution, which Shehata and Stacher suggest aim to, “further solidify the legal underpinnings of authoritarianism in Egypt.”

Some of the amendments ban political activity based on religion, make it almost impossible for an independent candidate to run for president, eliminate the impressive system of judicial supervision of elections that had been established in 2000, and provide constitutional anchorage for wide-ranging anti-terrorism measures, such as using military and exceptional courts, and allowing the police to search homes and conduct electronic surveillance without warrants.

It is very sad to watch this spectacle, and harder yet for Egyptians themselves to endure its consequences. Watching men, women and countries of stature choose to become small is more pain than the Arab world should have to endure.g