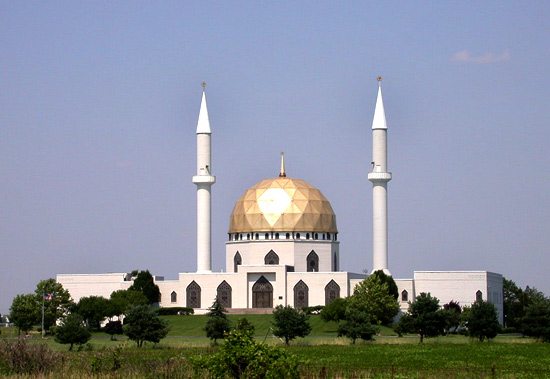 From Interstate 75, the sight is striking: A gleaming white mosque with twin minarets in the classical Islamic style rises out of the Ohio countryside.

A visit to the Islamic Center of Greater Toledo during Friday prayers offers another remarkable scene. Inside the mosque’s domed prayer hall, as light streams through stained-glass windows inscribed with attributes of God and verses from the Koran, men and women gather to pray alongside each other, with a low partition in between. In most mosques, women pray either behind the men, separated by a curtain or enclosure, or in another room.

“This center has always been progressive in that sense. Even at social functions, men and women are never separated,” says M.Y. Ahmed, president of the mosque’s governing council. “This has been a tradition since it started.”

This Midwest Muslim community, founded by Syrian-Lebanese immigrants some 75 years ago, stands out in several ways as an example of American faithful shaping their Islamic practice for the place and the times.

The center, for example, elected the first woman president of a mosque in the US and perhaps in the world, in 2001. A forward-looking imam – who was not hesitant to promote ijtihad (interpreting Islam for contemporary times) – broke new ground on religious issues from interest banking to Islamic dress code and women’s rights. The center has an open-door policy to visitors and engaged actively in interfaith endeavors long before the events of Sept. 11.

Still, it was not immune to the backlash after 9/11. Nor has it been immune more recently to the shift within Islam toward greater orthodoxy, which is testing the center’s progressive tradition.

“There has been a general tilt to the right all over America in the Muslim community,” says S. Amjad Hussain, a professor emeritus at University of Toledo Medical Center. “Some people in our center would like to reverse certain traditions, like that short partition between men and women, but they would have a battle royal on their hands!”

One of the accomplishments of the center as it grew over the years has been forging a flourishing community (550 families) from Muslims of 23 nationalities, as well as both Sunnis and Shiites. From the start, people were expected to keep ethnic or sectarian differences out of the mosque.

“We try to knock down this kind of division and to teach mainstream Islam,” says Imam Farooq Aboelzahab, an Egyptian trained at Al-Azhar University in Cairo. The imam says he had a lot to learn himself when he arrived in 1998.

“I had to learn from the last imam how to be more open-minded, more flexible, and to compromise on little things and focus on important issues,” he adds.

In the Friday sermon, he speaks of the import of words as well as actions, and how tending to one’s language can have a significant impact, in marriage and the community at large.

The spiritual leader at the mosque from 1982 to 1998, Imam A.M. Khattab, was also Egyptian but served as an imam in Canada for several years before bringing his dynamic approach to Ohio. “He was an original thinker, but he had a firm foundation as a scholar and religious leader,” says Dr. Hussain, a physician on the board of trustees at the University of Toledo.

Imam Khattab took bold stances on questions still roiling the Muslim ummah (global community). He separated the concept of interest banking from usury, which allowed the center to be built in 1982 with mortgaged money and not have to look to funding sources (and guidelines) from other countries. He made people think about applying the teaching that “two women are equal to one man as a witness,” pointing to knowledgeable women trained in economics or the law.

“He would give his opinions, which might be considered liberal by some people,” says Dr. Ahmed. “But he would try to stimulate thinking and get to the heart of things and not just take it literally.”

As a woman and an attorney, Cherrefe Kadri views the imam as both brave and as a uniter. “He’d say, ‘Use your mind – that’s what God gave it to you for.’ ” At the same time, “he had an ability to relate to everybody … and make it work.”

What has also made it work over the years was the strong sense of community established by the founding families. Born in Toledo of Lebanese heritage, Ms. Kadri remembers the first mosque, built downtown in 1954, and the way other Arabs and then Indian and Pakistani physicians starting arriving with their families.

Needing more space, the community bought 48 acres out in Perrysburg township, and completed the highly visible Islamic Center in 1983, attracting many more Muslims. Meanwhile, people driving the Interstate were intrigued, and soon they had to open their doors wide.

“We’d be out every weekend planting grass and landscaping, and people would just stop off the expressway for impromptu tours,” Kadri says. “We couldn’t get our work done, so we had to formalize it! We had hundreds, maybe thousands going through on a monthly basis.” The ladies’ auxiliary began offering lunches twice a month for visiting groups.

That familiarity bore timely fruit when 9/11 shattered America’s calm. The night after the World Trade Center collapsed, someone shot out one of the Center’s stained-glass windows with a rifle, and its voicemail filled with threatening calls.

Just months earlier, Kadri herself had been elected to be the first woman president of the mosque (a major and controversial step). When news of the backlash became known, she heard from a local Christian radio station that they wanted to help – to invite people to come encircle the mosque and pray for their protection.

While they expected about 300 people, the crowd grasping hands around the complex reached 1,500. Kadri had bought Hershey Kisses and put them in baskets to distribute. The station had planned a short program of prayer and singing.

“It was a beautiful fall evening. They postponed the start of the program because the traffic was a mile long with people trying to get there,” Kadri recalls. “Baby strollers, old folks, young folks. It was so warm – I wish I had the words.”

At the same time, the challenge of explaining Islam in the community continues. Imam Farooq speaks frequently at schools and churches. He tells of being invited to a church gathering after a newspaper article included very negative remarks on the prophet Muhammad. “I spoke from my heart and asked, ‘Why do we have to insult each other?’ ”

It turned out that the man who had written the article was present and admitted he really didn’t know much about Islam but had gotten those ideas from a book.

The imam values the experience of relating to other religious communities. “Back home I never had that communication. Here you can get together in the house of God, and everyone talks freely about what he or she believes, and debate issues in a civilized manner,” he says. “Here we learn how to differ and still maintain respect for each other.”

Now, a challenge to

A similar challenge is posed these days within Islam. Some Muslims who consider themselves moderates or progressives face a changing environment.

“Whenever a community feels besieged they turn to religion, and after 9/11, through no fault of their own, American Muslims feel besieged and many become more orthodox and practicing,” Hussain explains.

One example is the stronger emphasis put on women wearing the hijab. For many Muslim Americans today, wearing the hijab is not only an expression of modesty but also a way to identify and commit oneself to the faith.

Whereas Khattab gave several sermons showing that the Koran did not mandate the head cover, Kadri says, “that’s all anyone likes to talk about today, that a woman should cover. My response is that I can’t imagine God put our whole religion to this piece of cloth; it seems my intentions and the way I treat people are a lot more important.”

At the center, people aren’t expected to think the same, the imam says. Some are strongly committed, some progressive, some in between. “That is their free will that God gifted them with,” he says.

The orthodox are just as horrified by terrorism as he is, Hussain says, but he is worried about the creation of “mental ghettos.” He sees all three major faiths growing more conservative.

“The moderate stature of the center is still there, and our traditions are wonderful,” he emphasizes, but many are concerned that ijtihad continue “so we can trailblaze a path for our children and grandchildren.”