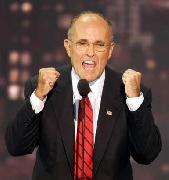 The leading Republican candidate for President, Rudy Giuliani, is not trying to win any friends in the Arab American community.  He is ramping up “war on terror” rhetoric aggressively, opposing Palestinian independence and allying with some of the most stringent neo-cons, some of whom were discredited for their role in promoting the invasion of Iraq.  But if Arab Americans mobilize as voters, they can prevent a Giuliani presidency. Giuliani’s Arab-bashing began when he was the mayor of New York City.  He personally sought to remove Yasser Arafat from the famed Lincoln Center during a concert the Palestinian leader attended.  Then, he refused to accept a $10 million donation for 9/11 families from Saudi Prince Alwaleed bin Talal. These moves won over the rabidly anti-Arab, right-wing New York press. This past week, Giuliani won the support of one of the leading right-wing evangelists in the United States.  Pat Robertson, who founded the Christian Coalition, endorsed the former New York mayor, saying that in a time of “deadly peril” Mr. Giuliani was the one who could maintain “the defense of our population from the blood lust of Islamic terrorists.”  This was a surprise endorsement given Giuliani’s social views, which some see as relatively liberal.  He leans towards the pro-choice position on abortion and backs gay marriage.  By making fighting terrorism the major theme, he was able to secure support from some right-wing Christian leaders.  Whether or not this translates into support from the base is another question.  Giuliani has emerged as the candidate of the Christian Zionist alliance, a base that should alarm Arab Americans and anyone concerned with the threat of American militarism in the Middle East. The candidate’s cadre of advisors includes a list of some of the most famously anti-Arab neo-cons out there.  Norman Podhoretz, Martin Kramer and Daniel Pipes have all been enlisted to give Giuliani advice on foreign policy questions. Pipes predicted that civil war in Iraq would not be a “strategic” tragedy —despite the obvious bloodbath — and that fifteen percent of Muslims are “potential killers,” according to an article in the Huffington Post.Another advisor, Rep. Peter King, R-NY, said there are “too many mosques” in America. In presidential campaigns, “advisors” are usually given high executive branch posts.  The idea of President Giuliani makes politically active Arab Americans lose sleep at night. Dr. James Zogby, a prominent Democrat and founder of the Arab American Institute, elaborated on the threat: “[A Giuliani administration] is the scariest thing I could imagine at this point. He’s Bush on steroids or Cheney without nuance. He is like the kid who grew  up in the tough neighborhood who wasn’t tough and now has the chance to sound tough. And I find it frightening because he preys on the worst instinct of people… You would be correct to call his administration a doomsday scenario.”In an essay for Foreign Affairs magazine, Giuliani laid out his opposition to Palestinian statehood.  “It is not in the interest of the United States, at a time when it is being threatened by Islamist terrorists, to assist the creation of another state that will support terrorism,” he wrote. “America’s commitment to Israel’s security is a permanent feature of our foreign policy.”Naturally, he advocates a hard-line stance against Iran.  He wrote: “The theocrats ruling Iran need to understand that we can wield the stick as well as the carrot, by undermining popular support for their regime, damaging the Iranian economy, weakening Iran’s military, and, should all else fail, destroying its nuclear infrastructure.”Another habit of Giuliani’s alienates many Arab Americans.  He uses terms like “Islamo-facism” and “Islamic extremism” in many of his talking points.  It is hard for Arab Muslims to see this as anything other than beating the drums of war. It also associates Islam with violence despite the fact that the vast majority of Muslims are non-violent. Many are alarmed about his potential impact on domestic rights as well. “I have had more than a few people tell me that they are worried about that prospect [of Giuliani in the White House] and who identify Giuliani as a person who has little to no regard for the civil liberties and human rights of Muslims,” said Rep. Keith Ellison, D-MN, Congress’ sole Muslim member. “He is pandering to the fears of 9/11 and needs a boogeyman to do it.”Arab Americans are far from helpless.  They can work against a Giuliani campaign by being more vocal, raising awareness about him, and by working to support his opponents.  The Arab American voice has long been too silent in politics. The Giuliani campaign should be one impetus for greater involvement.

(Editor’s note: According to a new Detroit News/WXYZ-TV statewide survey, Giuliani is favored by 28 percent of Republicans — slightly better than the 25 percent support for Romney, a Michigan native whose father was the state’s governor in the 1960s. Both former Tennessee Sen. Fred Thompson and Arizona Sen. John McCain continue to lag behind. Thompson is still third, now at 13 percent, followed by McCain, at 12 percent.)