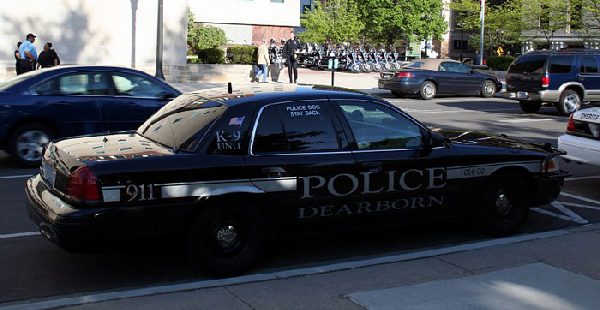 DEARBORN — Dearborn police executed a search warrant in the wrong house last month. About 10 officers with guns and flashlights entered the home of an Arab American family, handcuffed the father, woke up his three children and interrogated the mother before allowing her to put her hijab on, said the owner of the house.
The police were at the address listed in the warrant, but they left after realizing that the house and its occupants did not match the descriptions stated in the warrant. Mohamad, the owner of the property, who asked not to be identified by his full name, said his family is still suffering psychologically from the “scary” experience.
Dearborn Police Chief Ron Haddad explained that the search warrant was issued based on a complaint provided by a woman who was allegedly assaulted at a house close to Mohamad’s. Haddad said she mistakenly gave the wrong address and location of the home to police.
Mohamad said the front door of the house was unlocked, which allowed the officers to enter without breaking in. They handcuffed and escorted him from his upstairs bedroom to the living room.  They then woke up his kids, separated them and searched his wife, who was studying in the basement, as she cried and told them not to touch her or hurt the children, he added.
“What we’ve seen in that 30 minutes, I don’t even wish it to my enemy,” said Mohamad. “My 7 year-old son keeps waking up in the middle of the night asking if the police would come again. He is afraid to go downstairs by himself. My family is scared.”
He added that he now has to stay at home at night, which affects his job that requires traveling.
Mohamad described the police officers who entered his house as “very mean and rude.” He was especially distraught with the detective, whom he says was in civilian clothes. “She kept yelling at me ‘stop talking.’ Even after she found out it was the wrong house, she kept asking stupid questions to my wife like: ‘Where were you last night,'” he told The Arab American News.
Last week, Mohamad contacted the Michigan director of the American-Arab Anti-Discrimination Committee Fatina Abdrabboh, who brought the issue to the attention of the police chief. Haddad visited the family the following day.
Mohamad said the chief told him he was following the situation and tried to reassure the family members that they were not the targets of the search warrant. “He is a very nice guy,” Mohamad said of Haddad.
Abdrabboh praised Haddad’s “immediate” response after she addressed the ordeal with him.
“Within a few hours, the chief came with me to my client’s home. There, he met the family, explained to the children that their mom and dad did nothing wrong and humbly listened to the frightening concerns of what happened to them,” she said.
The search warrant describes the exterior of the residence and states that it is an upper flat. The description does not match that of Mohamad’s single-family home. “The fact that the police entered the home at 2 a.m. when anyone on earth could read from the face of the search warrant a discrepancy is beyond troubling,” stated Abdrabboh.
However, Haddad said he does not agree that the differences between the house described the warrant and the one searched by the police were obvious. “The house is huge. It looked like it could be a two-family home,” he explained.
The police chief said the officers acted in “good faith.” “My initial review indicates that they spent a reasonable amount of time inside that home, speaking to the family,” he stated.
The ADC Michigan director is demanding an investigation into the incident to find what exactly happened. “I trust that based on the combination of the chief’s leadership thus far, he will provide us with such an investigation,” she said. “As a person born and raised in Dearborn and very familiar with particular dynamics in this city, the chief’s conduct [last week] seems to indicate that any impropriety will be handled swiftly. I am confident in his leadership.”
Haddad said a full review of the incident will take place. He added it is too early to determine if the officers had violated any of the police department’s rules.
Mohamad was offended by the way the cops dealt with his wife. “They should give us some respect,” he said. “They could have given my wife two minutes to put on the scarf. It is not the end of the world.”
Haddad said the department has rules on how to act with women who wear the Islamic headscarf, but sometimes officers don’t have “the luxury of time” and must move quickly to secure the premises. He explained that when executing a search or arrest warrant or responding to a domestic violence complaint, the police have to secure every room in the house to prevent any escalation of “physical danger.”
“Clearly, we understand the dangers of this type of police action, and we will review our policies and procedures to ensure that public safety is first, as well as our officers’ safety,” the chief told The Arab American News.
Mohamad is contemplating legal action against the Dearborn Police Department but says his aim is not monetary compensation. He said main concern is to prevent the incident from happening to other people and to protect the sanctity of homes in the community.
Abdrabboh said she respects Mohamad’s “courage and conviction,” reiterating that his goal is to prevent the incident from repeating itself.
By Ali Harb