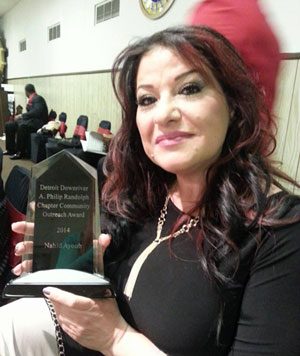 DEARBORN—On April 12, Nahid Ayoub, the founder of the charity Project Dignity, received the Community Outreach Award from the A. Philip Randolph Institute Detroit Downriver Chapter during a ceremony at the UAW Local 600 in Dearborn.

Project Dignity’s work focuses on the needy and bringing attention to the issue of poverty.
Ayoub says she is the first Arab American to receive the award. Wayne County LCLAA Trustee Cindy Garcia presented her with the honor at the ceremony.
Over the last 11 months, Ayoub has volunteered her time and fed the needy in Detroit nearly every week. She says her work wouldn’t be possible without the help of donors that include local businesses.  “There are so many good people in the community,” Ayoub said.
Others who were recognized for their work in the community include Lindsay Maas, a field organizer for Planned Parenthood Affiliates/Advocates of Michigan based in Detroit; General Baker, a labor and human rights advocate who has been at the center of many of the struggles for social change and economic justice in Detroit since the 1960s; and Robert Lewis Robinson II, who has been engaged in several charitable organizations in Detroit.
Project Dignity collected over 83 Easter Baskets and donated them to the needy over the holiday. Ayoub hopes to open a homeless shelter one day. “I dared to go where people would never dare to drive by. I didn’t just take food, I took my heart, my sympathy and arms,” she said.