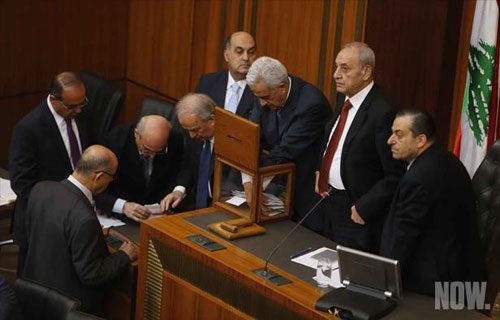 Beirut — Lebanon’s parliament has failed to elect a new president in the first session of presidential elections on Wednesday, April 22. No candidate succeeded in getting the minimum 86 votes, or a two-thirds majority, needed to win the presidency in the first round of voting.
All the member of parliament left the floor out after the ballots were counted, preventing a quorum for a second round of voting. According to the Lebanese constitution, a candidate needs only 51 percent of votes in the second round to win the presidency. The next session to elect a president will be held on April 30.
The mandate of President Michel Suleiman ends on May 25. Although members of parliament are legally obliged to elect a new head of state before this date, the post may remain vacant for weeks or months. When President Emile Lahoud’s term ended in November 2007, the cabinet collectively adopted his responsibilities until Suleiman assumed office in May 2008.
To date, the 14 March bloc is backing Lebanese Forces Party leader Samir Geagea for president. Wednesday’s first round of voting, Geagea received 48 votes, well short of the 86 required.
The National Struggle Front, headed by Walid Jumblatt, had nominated MP Henry Helou, who trailed in second place with 16 votes. Fifty-two MPs abstained, seven votes were declared void, and one vote was cast for former President Amin Gemayel.
General Michel Aoun has not announced his candidacy, but he is considered the strongest man for the job in the Hizbullah-led 8 March bloc.