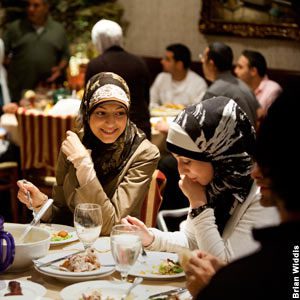 DETROIT—When the Islamic holy month of Ramadan arrives, daily life is altered in Muslim communities around the world. Practicing Muslims refrain from consuming food and drinks from sunrise to sunset. The dietary, cultural and political changes leave a great impact on the community during that month. Locally, Ramadan affects business, especially the food and entertainment industries.

For some Muslims across the world, Ramadan starts Saturday, June 28, while others will begin observing the holy month on Sunday, June 29.
The reason for the discrepancy in the start of the month is because Ramadan is the ninth month of the Islamic lunar calendar; the beginning of each Islamic month is marked by the sighting of the waxing crescent moon following the new moon.
Sheikh Mohammad Mal Allah, a scholar at the Islamic Institute of Knowledge in Dearborn, said the sighting of the crescent moon is sometimes not confirmed by all Muslims, which is why they may begin the fast at different times.
Some Muslim scholars permit the use of scientific calculations to determine the time of the birth of the new moon. But others require that the new moon be sighted with the naked eye.
Fasting is one of the five fundamental pillars of Islam. Besides fasting and Qur’an recital, charity and personal reflection are also encouraged during the month. Muslims break their daily fast by sharing meals with family and friends. The meals, which usually include many options to make up for the nutritious elements they didn’t consume during the day, are known as iftars. The end of Ramadan is celebrated with a three-day holiday, known as Eid El-Fitr (the holiday of breaking the fast).
Muslim scholars regard Ramadan as a month of cleansing and complete submission to God. Muslims fast for the entire lunar month, which can be 29 or 30 days, depending on when it falls during the year.  Because Ramadan is based on a lunar calendar, the date changes each year. Last year, the holy month began on July 9. Next year, it will begin June 18.
Muslims believe the initial verses of the Qur’an were revealed to the Prophet Muhammad during Ramadan. They view fasting as an act of self-discipline that strengthens patience and provides the opportunity to connect with God on a spiritual level.

Ramadan is also a time when family bonds are strengthened and communities spend much time together, sharing meals and offering prayers.
“It is not only about fasting,” Mal Allah said. “You also have to refrain from things such as gossip and speaking badly about others. This is a holy month and we have to try as much as we can to not sin. You shouldn’t swear or talk bad about people. That way you can have a clean fast and God can accept it, otherwise you will have a problem. You need to make sure you receive the holy month with a clean heart.”
He also stressed the importance of giving to the needy during Ramadan. “Even if you cannot afford to make a financial contribution to a local charity, it is fine, you can volunteer your time,” he said.
Mal Allah said women who are pregnant and others living with serious health issues should refrain from fasting if it has a negative impact on their health. He added that self-harm is forbidden in Islam and that people who will suffer major health complications because of fasting are advised to avoid it.
“If you are pregnant or if you are very ill and questioning whether you should fast this Ramadan, please remember if you can’t because it will impact your pregnancy or your health, then you should not only stop, you have to stop,” he said.
It is common for people to break their fast during Iftar dinner by eating dates. According to Mal Allah, this tradition has great significance in Islam.
“The prophet Muhammad actually recommended that we break our fast with dates,” the sheikh said. “It is not necessary, but because of that most people do. And, actually, research shows that breaking fast with dates has great benefits for our nutrition and health.”
Dawud Walid, the executive director of Council on American Islamic Relations of Michigan (CAIR-MI), offered spiritual tips for the holy month, which include reading the Qur’an more; stepping up charitable efforts; remembering God during the night and day and sending prayers to the prophet Muhammad more often.
Victor Begg, co-founder of the Michigan Muslim Community Council, said his goal this Ramadan is to get closer to God. “Fasting should remind you of God’s presence,” he said.
Begg said he is worried that the violence plaguing many countries, including Iraq, will prevent families from observing the holy month. “We will be thinking and praying for peace around the world this Ramadan,” he said.
Ramadan and local businesses
Ramadan’s effects exceed spirituality. The holy month stimulates business in the Muslim community and causes an economic boom for restaurants and grocery stores.
Iftar dinners gather family members of all tastes and appetites. They are like Thanksgiving dinner for 30 straight days, minus the turkey. When people make more food, they buy more groceries.
“During Ramadan our sales go up exponentially,” said Osamah Munaser, an employee at Freshland Market on Schaefer Rd. in Dearborn. “We increase our stock purchases and continue to fill up our store on dates and fava beans. The store is livelier in Ramadan because more customers visit our shop. They would buy food and items to make delicious platters of food that they would not normally do in the other months.”
However, Muslim American families do not cook at home every day. Sometimes, they come out in droves to local restaurants.
Diab Hamadi, the owner of Al-Ajami Restaurant, said business goes up during the holy month, although the eatery loses a significant chunk of its patrons during most of its hours of operation. Iftar makes up for it.
Al-Ajami, like many restaurants in Dearborn, offers an open buffet for iftar that includes dates, salads, soup, seafood options and oozi, its signature stuffed lamb. However, the regular menu will still be available during iftar.
Hamadi said he lived in Virginia for 32 years, where Ramadan “never felt like how it is supposed to feel.”
“Here in Dearborn you feel the spirit of Ramadan,” he said.
Hussein Mokahal, the manager of Signature Cafe, a Dearborn hookah lounge and restaurant, said his business is always “packed” during Ramadan after iftar. In addition to the regular menu, Signature cafe introduces saj, crepe-like flat bread, for Sohour during the holy month. Sohour is a late night meal, which makes up for breakfast the following day for fasting Muslims. Breakfast food is usually served at Sohour.
Many bakeries and restaurants in Dearborn open until the early morning hours during Ramadan to serve Sohour. Mokahal said Signature cafe’s hours are flexible during the holy month.
“We stay open as long as guests are still here,” he said. “Last year we were open until 7 in the morning sometimes.” However, while Ramadan stimulates local dine-in restaurants, takeout joints take a hit. Tuhamas, a popular takeout eatery on Warren, closes down temporarily during Ramadan. Hussein Saleh, the manager of Shawarma Station, said business goes down by 80 percent during Ramadan.
“Ramadan is the month of God,” he said. “But it is not great for us business-wise. We lose most of our customers during the day; and for iftar, not a lot of people want sandwiches.”
Contrary to bakeries that extend their hours, Shawarma Station will be closing earlier during Ramadan. It is usually open until 1 a.m., but it will be closing at 11 p.m. Saleh said people do not want to order food after having iftar.
By Ali Harb and Natasha Dado