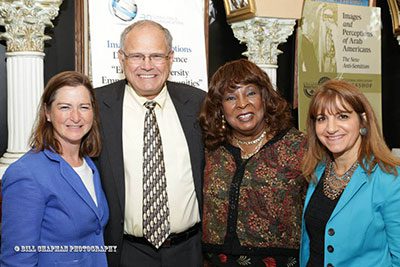 DEARBORN HEIGHTS – More than 65 attendees turned out at the Al-Ameer restaurant last week for the “Images and Perception Diversity Conference Sponsorship Appreciation Luncheon.” The event was hosted by 3D Consulting & Communication, which earlier this year held its 12th annual conference in Dearborn.

The attendees discussed the effects and impact the conference has made on prior participants and what measures could be taken to bring the discussion of diversity and inclusion to the forefront with Detroit’s various communities.
The conference is held in Dearborn every April and aims to build bridges between the Arab American, African American, Asian American, Jewish American and Latin American communities. In recent years, the success of the conference has expanded to Chicago. This November, 360 Consulting will host its third annual conference there.

“We thanked everybody at the event and talked to them about what their contributions have meant and how the conference has changed people’s lives,” said CEO Siham Awada Jaafar. “We aim to change the style of approach of perception by providing tools in dealing with different cultures and understanding the culture that exists and how it helps bring positive interactions with people.”
The conference has also brought together participants in the workforce from all ends of the spectrum, engaging professionals from the government, education, law enforcement, entertainment, media and corporate fields.
The last conference in April included keynote speaker Edward James Olmos, a Latin American actor whose films have included “Stand and Deliver” and “Selena.” Other speakers included actor Sayed Badreya, Palestinian Author Suheir Hammad and Matthew W. Seeger, dean of the College of Fine, Performing and Communication Arts at Wayne State University.
“The last event was really life changing for a lot of us,” Awada added. “Engaging Arab-African-Asian-Hispanic and all Americans in the conversation was so electric. We spoke about our commonalities and challenges and it gave a birds-eye view of the communities and cultures and it made us appreciate it a little more.”
Attendees at last week’s luncheon included Detroit R&B singer Martha Reeves, who performed the national anthem; Dearborn Mayor Jack O’Reilly; Dearborn Heights Mayor Dan Paletko; U.S. Attorney Barbara McQuade and State Representative George Darany.
Also present were representatives from Henry Ford Community College; Dearborn Police Department; Detroit Wayne Mental Health Authority; Arab American Civil Rights League (ACRL); Henry Ford Hospital; Blue Cross Blue Shield; the Consulate of Mexico, Comerica Bank; GM; DTE; Wayne Community College and Greenland Market, among others.
The Arab American News was also given a special Champion of Diversity Award for contributions in building bridges and promoting culture diversity through news reporting.
“The Images and Perceptions Diversity Conference” is always looking for more sponsors and participants in both the Detroit and Chicago areas. Those interested in the event can contact Siham Awada Jaafar at 313.910.1955.