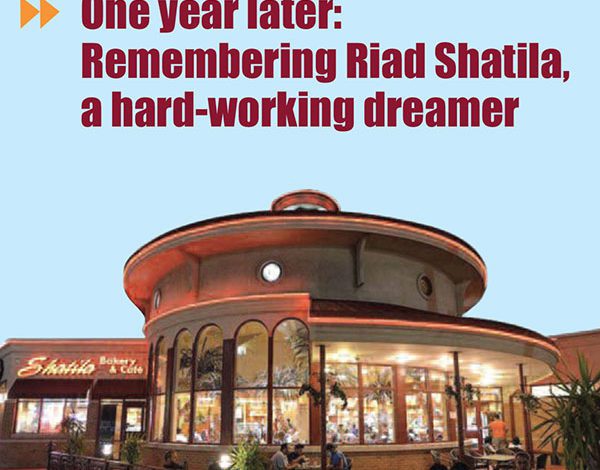 DEARBORN — Ford Motor Company is not the only internationally-renowned Dearborn-based business. Shatila Bakery’s sweets have become a prominent feature of the city and its growing Arab American community. The bakery’s products are shipped and consumed across North America and its store is a “must” destination for Dearborn’s visitors.
Shatila Bakery’s rise to prominence is the epitome of the classic American success story. An innovative businessman established a startup that has grown into a recognized brand through commitment and hard work. Founder Riad Shatila passed away on Sept. 6, 2013, but his family is maintaining and growing the business, along with his legacy.
A year after he lost his long battle with cancer, Shatila is remembered in the community as a hard-working, dedicated dreamer.
His widow Zeinat is now the president of the company, while his daughters Tanya and Nada share the vice presidency. Together, they run the business’ daily operations.
Shatila immigrated to the United States in 1977 and established the bakery in a small shop on Warren Avenue two years later, before moving to a bigger location on Schaefer Road in 1984. The bakery ultimately moved to its current location at 14300 W. Warren Ave in 2003. Shatila also opened a factory to accommodate the high demand for its pastries.
Shatila made all his products from scratch. He also revolutionized the way Middle Eastern pastries are presented by selling baklava and other sweets on trays, which allowed the products to be shipped across the country and refrigerating them for longer lasting quality. By shipping sweets all over the nation, Shatila made Arab desserts a familiar taste to many Americans outside Metro Detroit.
Nada Shatila said it was hard for the family and workers to cope personally and professionally with losing her father.
“He had a personal connection with all the employees,” she said. “It was a tragic loss for all of us. The most important thing to him was to continue the business and his legacy, which motivated us and made us stronger as a family.”

Nada Shatila said her father prepared her and her sisters Tania and Batoul to operate the business, as her mother was present alongside him since the establishment of the bakery. “We learned from his example,” she said. “But standing directly in his shoes is a different experience. We adapted quickly and different family members helped us— my mom, my sisters, some aunts and uncles.”

She added that it was challenging to uphold her late father’s high standards and replicating his commitment and relationship with the employees.
Shatila Bakery opened a new location in West Bloomfield. According to Nada Shatila, the West Bloomfield store was a sweets shop called Pistachio that served Shatila products. The owners of the store had an agreement with Riad Shatila that they would come to him first if they wanted to sell the shop. When the owners decided to leave, the Shatilas acquired the store.
She said she and her family are looking into opening locations beyond Michigan to accommodate out-of-state customers. She added that the business continued its steady growth after her father’s death, as production increased by 10 percent over the past year. Last week, Shatila was named the Best Middle Eastern Bakery of the year in Southeast Michigan by Channel 4’s website ClickOnDetroit.com. The bakery had previously won the award in 2012.
Nada Shatila said retaining the award her father won is a testament that the bakery has maintained the quality of its products and preserved the trust of customers.
Riad Shatila won multiple awards, including Entrepreneur of the Year from the Arab American and Chaldean Council. The bakery has also been featured in several national newspapers and magazines.

The Shatilas held a family commemoration for the first anniversary of Riad Shatila’s passing last week at the Islamic Memorial Gardens in Westland, where he was laid to rest.

“Before coming to this country we heard about the American Dream. Riad Shatila symbolizes this dream with his work and legacy,” said businessman Ali Jawad, the founder of the Lebanese American Heritage Club.
Community activist Ghassan Hourani said Shatila was generous and never turned away anybody who came knocking on his door.
“He contributed to all community organizations, but he did it silently,” Hourani said of Shatila. “He gave from his heart, not his pocket. He did not brag about his contributions.”
Hourani added that Shatila treated his wife as a business and life partner and consulted her about all business and financial decisions, and she always recommended increased support to causes of the community.
“He was a man with limitless ambitions,” Hourani added. “He adored his job. He worked everyday and strived to improve the quality of his products and the image of his shop, even when he was getting ill.”
Hourani said Shatila passed his professionalism and passion for the job to all his employees, who always delivered products and service worthy of the bakery’s name.
Dearborn psychologist Hoda Amine said Shatila’s success was a product of his strong work ethic and the support of his “wonderful” wife and family. Amine lived near Shatila’s first shop on Warren.
“He was a man of faith, charitable and hard-working,” she said.
Amine added that Shatila embodies the ambitious values of Arab Americans. “We are entrepreneurial by nature,” she said. “Because we came from oppressed countries, we dream big. We are persistent. We always work hard to get what we want.”
Hassan Bazzi, the president of the Dearborn Heights Community Organization, and a friend of Riad Shatila, described Shatila as a role model.
“He was from the people for the people, a very good man, a humble, good businessperson,” Bazzi said. “He and his establishment will always be a part of the growing community history. He dedicated a lot to the community and supported to its organizations. We miss him dearly and encourage people to follow his path of dedication and commitment to the community.”
As for the continued growth of Shatila Bakery after the death of its founder, Bazzi said the credit goes to Shatila’s early dedication to set the right foundation for the business.
“Shatila Bakery should teach us that when you do something right from day one and believe in what you’re doing, it will be there even if you are not,” Bazzi added. “His wife and his daughters and the people involved in the management also played a great role in following his footsteps and keeping the business thriving.”
Mohammed Turfe, the founder of the Bint Jebail Cultural Center, said Shatila Bakery sets an example for the community on how to conserve institutions.
Turfe described Shatila as a kind yet aggressive businessman.
“He helped the community and put a lot of people to work,” he said.
By Ali Harb