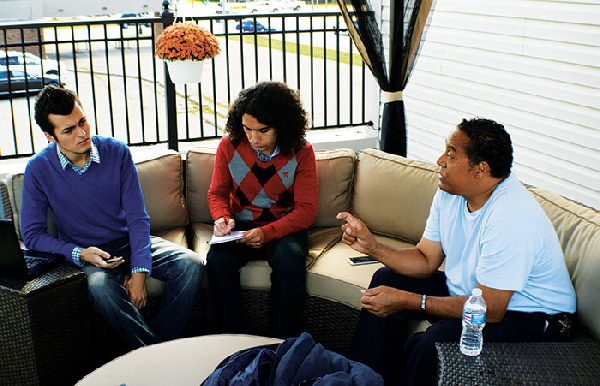 DEARBORN — Wayne County Sheriff Benny Napoleon said his department can play a greater role in ensuring the safety of Detroit and its surrounding communities.

In an interview with The Arab American News, Napoleon, Wayne County Deputy Chief Mike Jaafar and Press Director Paula Bridges, discussed the financial challenges the department is facing; affirmed that it was not involved in the failed jail project and highlighted the importance of diversity in police agencies.
Communities throughout the county have seen an increase in sheriff’s deputies on their streets. According to Napoleon, deploying a higher number of officers to the streets is a part of the Sheriff’s Community Organized Urban Team (S.C.O.U.T) program, where deputies are deployed in a highly-visible capacity to help the local authorities and community organizations tackle specific policing and quality of life issues.
In several areas in Detroit, the department has set up mobile command posts in coordination with gas station owners, who usually allow their businesses to be used as a hub by the department. The S.C.O.U.T.s are able to patrol a 4 mile radius surrounding those businesses.
Both Napoleon and Jaafar said that this strategy has cut down crime in the neighborhoods and has kept business owners at ease. They hope the department will have more funding in the future to expand that operation into other cities like Inkster and Taylor.
“It’s definitely a peace of mind for residents and businesses. What’s nice about it is the bad guys definitely go away,” Jaafar said. “What my wish would be is that we had more resources to do that. It does wonders to the neighborhoods and that’s a testament to our S.C.O.U.T. officers and our reserves division.”
Napoleon affirmed that lack of funding is preventing the expansion of the program. In fact, funding seems to be the department’s most strenuous battle in recent years.
“It’s always about the money; and when it’s not about the money, it’s about the money,” Napoleon said.
Napoleon added that the Sheriff’s Department has been plagued with financial strains for several years, because the county has put a cap on its budget, forcing it to close several units, including the cyber crime and narcotics division.

The limited resources have also forced Napoleon to put staffers on overtime as the jail continues to hold more inmates than the county allocates in its budget. The sheriff argued that the county would be saving millions annually if it were to hire in more deputies, as opposed to having current employees in the higher ranks fill in those hours.

Napoleon said he believes the sheriff’s department needs to hire 250 additional deputies, but the county has agreed to hire 80 new officers only. The sheriff wants to be in control of the hiring process, which is now handled by the county.
Regardless, low wages have been creating recruiting problems. Deputies currently start with a $28,000 salary. With overtime hours factored in, it would put them at $42,000. Napoleon said the county needs to restructure its system, because it has been paying captains almost twice as much as deputies working the same exact hours.
“My officers are working overtime because I don’t have enough people,” he said. “They have captains who make $80,000 a year doing the same hours. It doesn’t make any economic sense. They should just hire more people, but they refuse to do that.”
The department is currently in a court battle with the county in an attempt to expunge a 40-year-old court order which structures the Sheriff Department’s jail budget at 1,776 inmates. Napoleon said that the jail currently holds more than 2,200 inmates, but he can’t release any of them for overcrowding because that authority belongs to the chief of the jail.
“I have 500 more prisoners a day than what the county has been budgeting me for,” Napoleon added.  “From the moment I get my budget, they know I have a deficit. I have to watch them; I have to feed them; I have to clothe them and I have to give them medical care. All of that stuff has to happen.”
Napoleon added that once the jail surpasses 1,776 inmates, he is required to open up more floors to house them. That means, he has to hire more guards, pay additional utilities and care for those added inmates.
The county also doesn’t account for an additional 600 people who are on electronic monitoring.
Due to the structure of the system, Napoleon said that Wayne County’s jails holds an unusual amount of felons, at 90 percent. County jails usually hold inmates who are waiting for pre-trail or are serving out a misdemeanor sentence, but because Wayne County is overcrowded with inmates, individuals with misdemeanor sentences have a likely chance of being placed on electronic monitoring instead of doing time in one of the three jails.
The county did attempt to improve its jail system with the construction of a new facility in downtown Detroit, now referred to as the “failed Wayne County jail project.” The sheriff said he was not involved at all with its conception.
The new jail, which was supposed to be built across the street from the Wayne County Circuit Court­­­­, stalled after it went $91 million over budget. Three county officials have been charged with mismanagement and neglect in connection to the project.
Napoleon explained that the goal of the project was to close all three jails in Detroit and allow the operation of one big jail, which would save the county $25 to $30 million a year.
“We were cut out of this process,” he said. “We were not a part in any significant way in working on the design or the contractors. We got brought to the table always at the end and told, ‘here it is; do you like it?'”
The sheriff said he should have been consulted about the jail from the beginning, so he could make recommendations about the project, which his department would eventually operate.

Napoleon added that those in charge of the jail project made all kinds of staffing assumption without seeking his opinion.
“They made design changes without talking to my people,” he said. “I think that’s one of the reasons the project is all screwed up now.”
Napoleon said he has reached out to Warren Evans, his predecessor as sheriff and the democratic nominee for Wayne County Executive. Evans is expected to win the election easily in November.
“I am very optimistic about our presumed new county executive, who is a career police person,” said Napoleon. “He understands the challenges that we have and how critical public safety is. I believe that he is going to be much more agreeable— within the resources that he has— to make public safety a top priority.”
Last year, Napoleon ran for mayor of Detroit, but lost the race to Mike Duggan.
The sheriff said said he has always gotten along with Duggan, although they were never “drinking buddies.”
“The mayor’s race did not get as dirty and personal as some folks wanted it to be.”
Napoleon added that he communicates with Mayor Duggan and is aiming to establish a strong relationship with the city in the future.
He said his department can be a significant partner in keeping Detroit safe if it gets the proper funding. He explained that his deputies can help Detroit by targeting certain crimes that the police cannot address because they are overwhelmed.
He added that the Sheriff’s Department is in the best position to aid in policing challenged communities throughout the county, because deputies can cross from one municipality to another without jurisdiction challenges.
The sheriff said the safety and quality of life of Detroit’s neighborhoods are the key to a prosperous future for the city.
“Until young people decide to move into the neighborhood– I’m not talking about Greektown and Midtown– and raise their children and send them to school, the city of Detroit is not going to change,” Napoleon said. “That’s what a city is really all about. It’s about what’s going on in the neighborhood.”
Napoleon said his department has the advantage of a diverse workforce and stressed the importance of diversity in law enforcement.                                            “A police agency that reflects the diversity of the community that it’s serving is better able to get the support and respect of that community,” he said. “I’ve been a firm believer of that my entire career. We have officers who look like the community they serve.”
Napoleon added that he is “blessed” to have Deputy Chief Jaafar with him when it comes to the Arab American community.
“He’s always been community-minded and he understands how important it is to me to have a department that’s responsive to the community,” Napoleon said. “He has great latitude to make recommendations to the folks who are working with him in the community and he recognizes the need to be diverse.”
Last month, a federal judge upheld the dismissal of a lawsuit brought against the Sheriff’s Department by an extremist group that held an anti-Muslim rally in 2012 at Dearborn’s Arab International Festival.
The department was handling the security of the festival. Deputies asked protesters to leave the festival after they deemed them a threat to public safety.
The protesters, who were holding a pig’s head on a spike, were allocated a “free speech zone.” But when confrontations started to flare between them and the people at the festival, the protest was dismissed. The group sued the Sheriff’s Department, alleging that it violated the demonstraters’ First Amendment rights.
“We recognize that people have a right to protest,” Napoleon said. “They have a right to free speech, but they also have to do it in a reasonable manner that would not jeopardize public safety. We didn’t care what the content of their speech was. It wasn’t until we thought that they were an imminent threat to public safety that we shut them down. I think we did the right thing.”
Despite some  setbacks, Napoleon is optimistic about the department’s future. He is preparing to bring back the narcotics division this fall and is putting an emphasis on the S.C.O.U.T program.
“We did okay on this budget,” he said. “Our primary job is to operate around some of the most difficult circumstances in America with some of the most dangerous criminals in America. My deputies go day in and day out and deal with this under some very difficult circumstances. I want people to appreciate the work they do and recognize that they do it in a very professional manner.”
By Samer Hijazi and Ali Harb