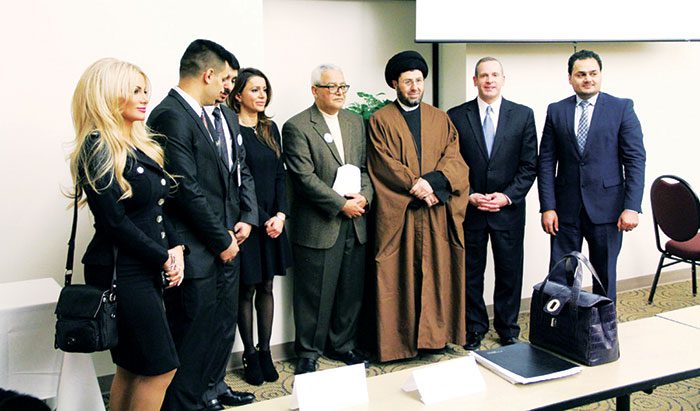 DEARBORN — On Tuesday, Nov. 25, The University of Michigan Dearborn (UM-D) hosted an event titled “Unmasking Terrorism”, in which panelists discussed and defined terrorism and its origins. The event was followed by a Q&A session.
The organizations involved in this event were Supply Chain Association; The Arab Student Union; the International Organization for the Defense of Human Rights; the UM-D Student Government and Students for Islamic Awareness. The moderator was Dr. Alaa Fai’k who received his PhD from the University of Michigan-Ann Arbor.
The event addressed terrorism in countries such as Iraq and Syria, the sources and funding that are behind these terrorists, and the condemnation of extremism in the name of Islam.
Arabic news stations, including Almas TV, al Iraqiya and Huna Baghdad, covered this event.
The event started off with the National Anthem by Yasmeen Suri, a Christian convert who speaks and sings publicly about her encounter with God.
Supply Chain Association President Kamal Alsawafy gave a short speech before the panelists spoke. He explained why an event like this is necessary and said it is Muslims’ duty to educate and inform the public.
“People are physically engaging in radicalization that aims to destroy humanity and we are here to fight back by educating society,” he said.
The panel of speakers included Dr. Ronald Stockton, a UM-D political science professor. He defined terrorism and explained the difference between it and war crimes.
“Governments do not conduct terrorism, because they define it, and they’re not going to define themselves as terrorists under any circumstances,” he said. “Terrorism is a peculiar form of violence used by non-governmental groups for political ends, not military ends.”
Sayed Hassan Al-Qazwini, the leader of the Islamic Center of America, was the next speaker. He defined terrorism as a non-Islamic action and said that these people have a political agenda.
“Terrorism has a political essence even if it has a religious face,” he said.
He quoted Ibn Rushd, a famous Muslim philosopher who lived in Spain during the Islamic Era. “‘If you want people to follow you blindly, paint your agenda with a religious cover.’”
Al-Qazwini also said that bombings usually occur in Iraq around 12- 1 p.m. The reason for that, he said, is because those behind the bombings think they will be having lunch with The Prophet after they kill themselves and others.
The next speaker was Paul Abbate, special agent in charge of the FBI Detroit Field Office. He said that the essence of what the FBI does is keeping the people safe and protected, stressing on treating all people fairly and equally.
“Since 9/11, terrorism has become more diverse and complex in terms of where the threats are emanating from and who is carrying it out,” he said.
According to Abbate, The FBI office in Detroit is one of the best in terms of reaching out to the diverse community, gaining trust, educating and listening to people.
Osama Siblani, publisher of the Arab American News, was also one of the panelists. He accused Saudi Arabia of being behind terrorist groups and supporting them financially.
“Only the powerful can put the ‘terrorist’ label on groups such as Hezbollah and Hamas,” Siblani said, adding that he does not define these groups as terrorists.
“Your terrorist is my freedom fighter,” he said. “It depends on where you’re sitting and who you’re looking at.”
Dr. Haitham Al-Mayahi is the president of the U.S Iraqi Youth Institute and he conducted intensive research on youth in Iraq. He focused on terrorism, sectarianism, and corruption in Iraq.
“Those are the main ingredients of the negative outcomes that we are seeing in Iraq today,” he said.
“We are facing extinction,” said Assyrian Christian Activist Nahren Anweya about her people in Iraq. Assyrian are the indigenous people in the country. She urged the people to take action and support the minorities in Iraq who have been displaced because of the terror and war.
“I really appreciate when our name is mentioned,” she said when Al-Mayahi mentioned the Assyrians in his short presentation. “We love our neighbors and appreciate everything our Muslim friends in Iraq have done.”
By Ghadeer Alaradi