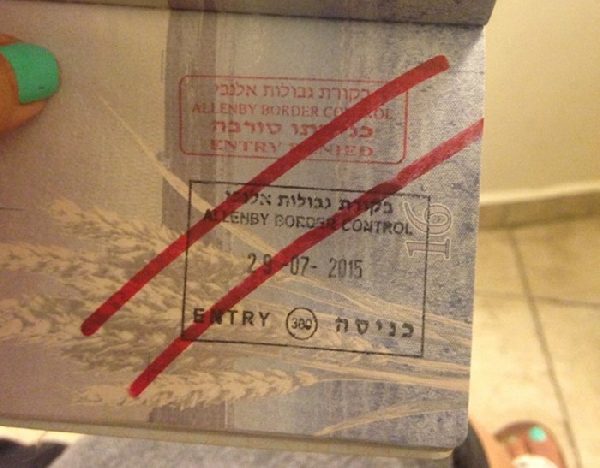 I waited more than seven hours and endured six different interrogations; and this is the conversation (from memory) that barred me from entering my homeland on the grounds that I was uncooperative.
It was with an extremely unpleasant woman in uniform, red hair and massive amounts of makeup (for some reason, that’s relevant). Keep in mind that all this information was already obtained by each interrogator before her:
Her: Why are you here?
Me: Visiting family, friends and opening ceremonies for playgrounds.
Her: Where is your family?
Me: Jerusalem.
Her: What is the relation?
Me: Cousin.
Her: (Clearly agitated with me) No aunts, uncles?
Me: No
Her: Where are you staying in Jerusalem?
Me: My cousin
Her: What is his name?
Me: (Gave his name)
Her: Other cousins.
Me: You want the names of all my cousins?
Her: Yes.
Me: There’s hundreds of them. It’s a big family. I don’t get what you’re asking.
Her:(Slams her hand down on desk) Who are you staying with?
Me: My cousin, Adel, whose name and number I just gave you, along with every other official who asked.
Her: (Now very angry) I am asking the questions.
Me: …
Her: (Slams hand again on table) Who else lives with your cousin?
Me: His wife and kids.
Her: What are their names?
Me: (One second brain freeze, looking incredulous, but conjuring the names to tell her)
Her: Why you not answer the questions?
Me: I’m answering all your questions
Her: You are not answering how I like.
Me: I can’t read your mind and I don’t care what you like. I’m answering your questions.
Her: You don’t care? Ok. Get out. I will show you.
The woman then calls my friend Stephanie in and asks her a bunch of questions about me. An hour later that woman and another called me over to tell me that I’m denied entry for non cooperation. I actually lost it. I screamed at them both. They threatened. I assure them I wasn’t afraid. Strangely, I actually wasn’t. I ordinarily would be.
I made a scene. A big one. I could hardly believe the insane feeling I had. They brought out three soldiers who just stood and stared at me. I kept yelling. I told them they’re the ones who should go back. I said it was bad enough we have to enter like tourists and endure their endless humiliations and power plays.
Everything inside of me was shaking, but I don’t think it made its way outwardly. I don’t know what I looked like to others. Crazy? insane? brave? Desperate?
I did realize at some point that they had no idea what to do with me. That they had expected me to just go quietly, but I was very loud instead. The truth is that I just wanted to cry. A desperate something from my gut. They give us so much to cry over. All the time. So I just screamed at them. “Thieves, occupiers,” I called them. “You wish you had the same roots as I do,” I screamed. “You should be the one to leave, not me. I’m a daughter of this land.” Then they took me to my luggage and sent me in the bus.
I regret walking and not making them carry me.
-Susan Atiyeh is a Palestinian American writer. She was visiting Palestine to work on a project to build parks for Palestinian children— “Playgrounds for Palestine.” She first wrote this story on her Facebook page.
By Susan Atiyeh