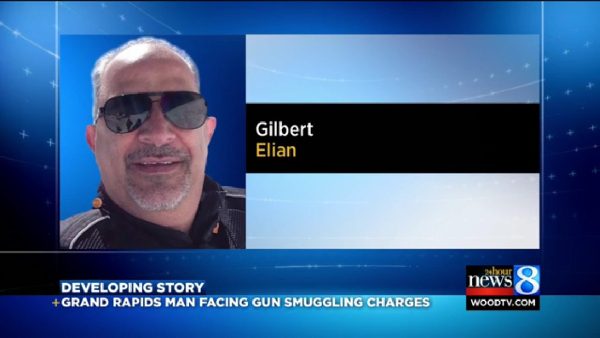 Gilbert Oscar Elian, a Lebanese man who became a naturalized U.S. citizen, was in federal court in Grand Rapids on Tuesday, July 28.

Federal authorities allege the 54-year-old used the import/export business he owns to smuggle the handguns overseas.

According to a criminal complaint filed in federal court Monday by a Homeland Security Investigator, Elian bought 93 handguns between January 2012 and May 2014 at retail outlets in the Grand Rapids area, including Cabela’s, Silver Bullet Firearms and Rylee’s Ace Hardware.

Elian’s excess purchasing of handguns was noticed by the Bureau of Alcohol, Tobacco, Firearms and Explosives (ATF). The ATF contacted Homeland Security in June 2014 about the matter.

According to court documents, Elian admitted to taking 65 of the guns to his home in Lebanon. In a follow up interview Elian stated that he had never shipped fully assembled guns to Lebanon. He claimed to have transported them on commercial aircraft at two to three at a time, dismantling the weapons, placing them in cases and checking them through the TSA Checkpoints.

According to the criminal complaint, 20 handguns and 23 ammunition clips were seized.

HSI investigators say Elian had exported or tried to export approximately 18 shipments from the U.S. to Lebanon since 2004, mostly recently in March when he shipped a container that was labeled as holing brake pads. Airline records also revealed he traveled frequently to Lebanon between 2001 and 2014.

Elian is scheduled for a preliminary hearing and a detention hearing on July 31 in federal court in Grand Rapids. He is currently in federal custody and being held in the Newaygo County Jail.