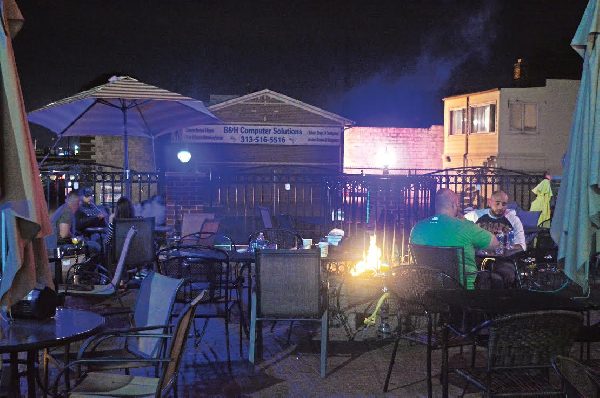 DEARBORN — The city is aiming to restrict outdoor smoking at hookah lounges as part of the hookah lounge ordinance passed earlier this year.

Several hookah lounges that incorporated outdoor smoking in their establishments must now petition the City Council for permission to continue serving hookah outdoors.

City officials have expressed dismay in the past about outdoor smoking at hookah lounges, raising concerns about second hand smoke and zoning rules. Several restaurants and hookah bars in the city have had outdoor smoking for years; some of those include Mango’s Café and Sky Lounge on Warren Ave., and Lapita on Michigan Ave.

In February, the City Council passed the hookah lounge ordinance, which enforces several new rules at Dearborn’s many hookah bars; including the requirement of a state tobacco exemption and implementing an 18 and over age limit, among several other policies.

The Council passed the ordinance as an attempt to police local hookah lounges at a municipal level, after loopholes in the state laws allowed business owners to disregard the Smoke Free Air Law established in 2010.

The new Dearborn hookah lounge laws includes zoning rules that will require smoking lounges to be at least 1,200 feet away from another existing business and at least 700 feet from residential, school, park or childcare facilities.

The new ordinance will also require hookah lounge owners to pay a $250 annual fee that will cover enforcement costs in the city.

The most noteworthy addition to Dearborn’s new hookah ordinance is that the city will cap the number of state exempt licenses at 15. According to city officials, so far nine businesses have been approved and the city will only approve six more.

The city had originally given business owners until August to reach compliance under the new guidelines, but that deadline has been extended to December to allow business owners to complete the application process.

Mango’s, a hookah lounge and restaurant located on Warren Ave., was one of the few businesses in the city that strictly followed the guidelines implemented by the state in 2010. Upon the enforcement of the Smoke Free Air Law, then-business owner Tarek Fahs separated the establishments into two entities.

There’s Mango’s Cafe, which includes both indoor and outdoor seating. In the building next door, there’s Mango’s take-out restaurant, which would frequently deliver food to patrons seated in the hookah establishment.

Fahs said he invested more than $175,000 to separate his business in order to stay in compliance with the state laws; the only problem was neither state or county officials ever showed up to enforce it.

When local business owners caught wind of the lack of enforcement, many of them continued to blatantly serve food and hookah under one roof. This resulted in establishments such as Mango’s— which followed the guidelines implemented by the state— losing traffic and business.

“We were the first people to separate the kitchen from the smoking lounge, so we could be in compliance,” Fahs said. “No one ever came to check on us. Nothing was ever enforced and business owners continued serving food and hookah. Customers would rather go to a place where they can get everything under one roof because it’s less of a hassle.”

In 2014, Fawaz Hazime purchased Mango’s from Fahs. Both of them still manage the day-to-day operations of the establishment. Hazime’s purchase came with a permit for both indoor and outdoor seating, a state exemption and a certificate of occupation.

Unbeknownst to Hazime, however, several problems would be coming his way.

The new hookah lounge ordinance implemented by the city this year restricts outdoor smoking to midnight and earlier.

Mango’s patrons often frequent the business to enjoy outdoor seating during the summer months. However, with the city now looking to prohibit outdoor smoking after midnight, the business could be set to take another hit.

City officials implemented outdoor seating restrictions for several reasons; to limit nuisances to the neighborhoods, as well as to keep them at an appropriate distance from schools and religious institutions.

Mango’s management, however, argues that they’ve never been trouble to the neighborhood. The establishment sits on top of a hill, away from the public sidewalks. Like many hookah lounges in the city, their hours of operation can go until 2 or 3 a.m.

Fahs said Mango’s is an ideal model of how a hookah establishment should be run in the city, yet city officials are still giving his business a hard time.

“We are on a main road, away from the neighbors and schools,” Fahs said. “Mango’s outdoor seating is the main attraction of this establishment. It sits nine feet above the street and we aren’t in anyone’s right of way.”

Management at Mango’s even took it upon themselves to petition the neighborhoods to support their bid for outdoor seating and extended hours that would allow it to serve take out food and hookah after midnight.

Residents in the area had no issues with signing the petition, showcasing the business’ good standing with the neighborhood.

Other businesses in the city might have presented some problems in the past with outdoor seating. Sky Lounge, also located on Warren Ave., about one mile east of Mango’s, had outdoor seating that at one point blocked the public sidewalk.

According to Sky Lounge’s attorney, Amir Makled, the business is now taking the appropriate steps to ensure that its operations are within city codes. The business is also one of the nine that has completed the application process for a hookah license. Now however, it will  need to petition the City Council for outdoor smoking.

On Tuesday, September 8, the City Council reviewed Mango’s petition for outdoor seating and decided to divert the proposal to the legal department in order to ensure that the business was in compliance with zoning laws.

Fahs said the city’s frustration with other businesses has distorted its perception of Mango’s, which has always followed both the state and city guidelines.

Fahs noted that City Council President Susan Dabaja and Councilman Mike Sareini have expressed support in allowing Mango’s to continue serving hookah outdoors, however it might be a tough sell for the remainder of the council.

“They should actually be using Mango’s as a model,” Fahs said. “We are not in people’s right of way, we are a stand-alone building and we have the neighbors’ consent. We meet every inch of those guidelines, so why won’t they say yes to us?”

Fahs did note that he welcomes the city to monitor all of the hookah establishments, but he is asking for it to be consistent in its enforcement and to reward those businesses that have been following the laws for years.