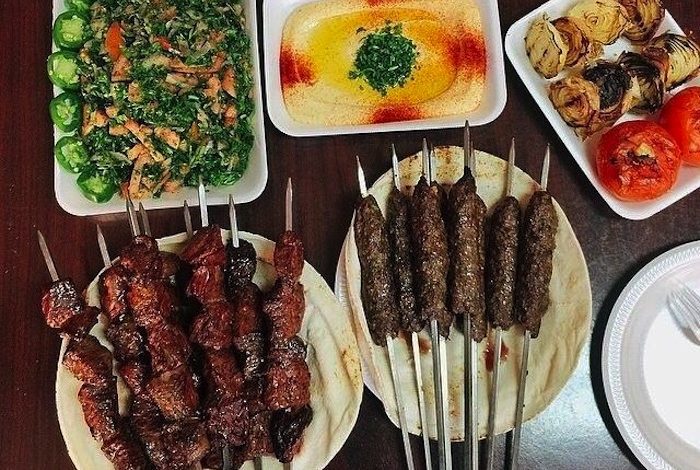 DEARBORN — When a New York Times travel writer came to Dearborn, he almost got kicked out of a butcher shop. He had his shirt and shoes on, but when he ordered one skewer of kafta, he was denied.
He had to order at least five.
“You’re not hungry. Come back another time,” Hussein Saad, the owner of Dearborn Meat Market told Seth Kugel.
The NYT correspondent eventually got a taste of Saad’s kafta, ground beef with parsley and onions, after explaining that he was leaving town soon. He found it “great.”
Saad, who is also known as Abu Ali, explained that he cooks his meat to order, so it is hard to “squeeze in” one skewer for a customer when the wood-fired grill is full.
“I told him, ‘Come back when you’re hungry,'” Saad said. “But when he was walking out, I felt I should let him taste our food, so I gave him a skewer.”
Dearborn Meat Market is fast becoming a popular destination for diners looking for an authentic Lebanese barbecue experience.
The front of the restaurant is a butcher shop, and the back is a humble dining area that is always filled with guests.
There are no fancy napkins or a service staff in uniforms.
The meat is served directly from the grill to the table on plastic plates covered with a loaf of pita bread.
Saad says the secret behind his success is the cozy vibe of his establishment.
“The food is always fresh,” he said. “But when you come here, you feel like you are barbecuing in your backyard at home.”
Although Kugel compared him to the “soup Nazi” from Seinfeld, a character who was extremely strict about how customers are served, Saad was happy with the story.
He said he gained new customers who read the article and came to “see what the hype is all about.”
Kugel also visited Tuhama’s a Middle Eastern takeout restaurant on Warren Avenue, where he tried beef shawarma on French bread, which he described as a “compact packet of deliciousness.”
After visiting the Henry Ford Museum, the reporter stopped at Sheeba for dinner, where he tried fahsa, a lamb dish served with 23 Yemeni spices.
Kugel wrote that the primary focus of his visit was the Arab American population.
He went to The Arab American National Museum, where he explored the interactive features of the exhibits and learned more about Arab identity and Arab Americans’ history in the United States.
Kugel’s story, which was published on Oct. 15, came out less than two weeks after Fox News ran a video report on Dearborn that contained numerous factual inaccuracies about the city.
By Ali Harb