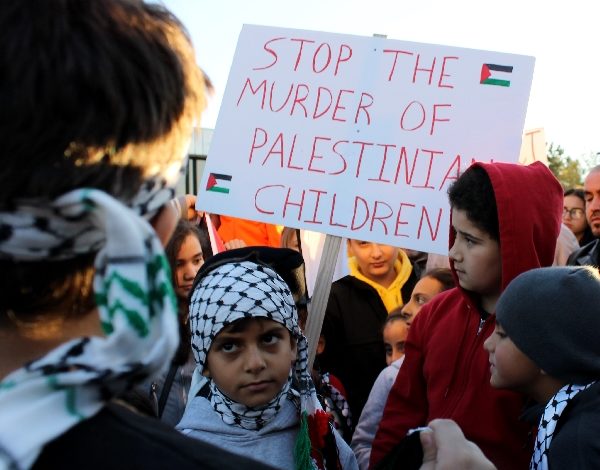 DEARBORN – Youth voices blended with those of other activists in chants of “Free, free Palestine” at a rally Sunday to support the mounting Palestinian campaign against Israeli forces.
The Dearborn chapter of Al-Awda: The Palestine Right To Return Coalition organized the rally at the Henry Ford Centennial Library. Pro-Palestinian demonstrations also took place in Chicago, London and other cities across the United States and Europe over the weekend.
In Palestine, young people are leading the current uprising, which leaders at the Dearborn rally described as the third Intifada. And as with many protests in support of Palestine, youth were active participants.
Abbas Bazzi, one of the event organizers, said it is important that his children understand the conflict in the region.
“If the situation takes longer than anticipated, we want them to carry on the struggle,” Bazzi said. “We’ll never abandon Palestine.”
Bazzi’s 7-year-old son, Noah, draped in a Palestinian kuffiyeh, walked down Michigan Avenue alongside his father and other demonstrators. Bazzi said his other children, Janna, 14, and Issa, 12, were also at the rally.
Sarah, a 17-year-old student at Plymouth-Canton Educational Park, who chose to be identified by her first name only, addressed the crowd, chanting, “Israel, Israel you will see, wallah Palestine will be free.”
“From America we try to do our best from here, and this is the only way I can show my support,” she said. “I wish I could be in Palestine fighting with them, but I can’t.”
The recent spike of violence in Palestine prompted Nour Nuseibeh, a 16-year-old student at Fordson High School, to join the rally. Nuseibeh has family in Jerusalem.
“It may not change anything at the moment,” she said of the rally but added that awareness of the conflict will help the Palestinian cause.
Ahmed, another event coordinator, said students can play a significant role in informing the public about the occupation of Palestine. He noted that university students and other young people have affected widespread change around the world.
Dearborn residents are supportive of the Palestinian cause, Ahmed said. So he hopes those who participated in the rally will use it as a model for organizing events in their communities or on their campuses.
As a graduate student at the University of Michigan, Ahmed said he will focus his efforts on Ann Arbor.
“Hopefully this is not just one moment,” he said. “It’s more like a movement and carrying on.”
Merinda Valley