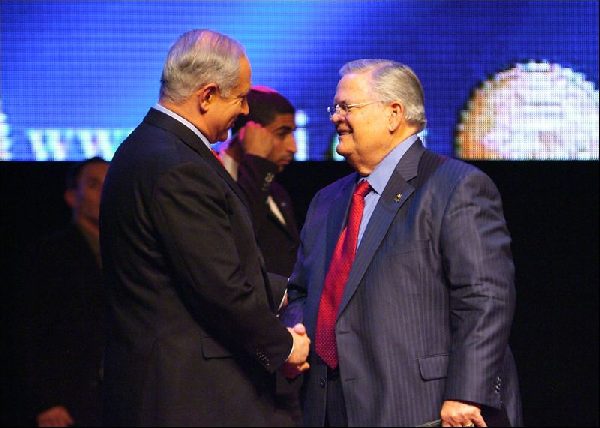 Israeli PR to the world is based on factual inaccuracies and fabrications — Palestine was a vacant land before 1948; Palestinians want to throw Jews into the sea; Israel is the only democracy in the Middle East; God gave Israel the right to colonize the West Bank…
But holding Palestinians responsible for the Holocaust is a new dangerous low for Israel’s disregard for the truth.
Prime Minister Benjamin Netanyahu claimed Tuesday that the Holocaust was the idea of the Palestinian Mufti of Jerusalem.
“Hitler didn’t want to exterminate the Jews at the time — he wanted to expel the Jews,” the Israeli prime minister said.
“And Haj Amin al-Husseini went to Hitler and said: ‘If you expel them, they’ll all come here.’
“‘So what should I do with them?’ he [Hitler] asked. He [Husseini] said: ‘Burn them.'”
The ridiculousness of this claim has earned the condemnations of historians and politicians across the world.
Even Dina Porat, the chief historian of the Yad Vashem Holocaust memorial in Jerusalem, clearly stated that Netanyahu’s allegation is false.
The Mufti indeed met Hitler in 1941. But as University of Michigan-Dearborn political science professor Dr. Ronald Stockton noted, by that time, had murdered at least 1 million European Jews.
And Germany was fast to deny Netanyahu’s claims.
“All Germans know the history of the murderous race mania of the Nazis that led to the break with civilization that was the Holocaust,” Chancellor Angela Merkel’s spokesman Steffen Seibert said responding to the Israeli prime minister.
Husseini went to Berlin to solicit support for a unified Arab state. But he was in no way the only religious or political leader to meet Hitler.
Netanyahu’s assertion is dangerous, given the critical events unfolding throughout Israel and Palestine.
The Holocaust remarks, while false, will undoubtedly fuel Israeli Jews’ hatred against Palestinians and Arab citizens of Israel.
Over the past few weeks, Palestinians have stepped up their campaign against the Israeli occupation because the apartheid system in the West Bank is becoming unbearable.
Netanyahu’s comments are an attempt to discount the legitimate incentive for Palestinian resistance and portray it as anti-semitism.
But this dirty tactic will backfire. Fanning the flames of extremism and hatred on one side of a conflict inevitably stirs up the other side. By answering to right wing extremists in Israel, Netanyahu is making the third Intifada a reality.
Aside from politics, Netanyahu has displayed an astonishing amount of moral cowardice. How can the head of the state that claims itself to be the last line of defense of the Jewish people play down Hitler’s evil?
It is a crime against history and the 6 million innocent Jews who were killed by the Nazis.
Whitewashing Nazism and anti-semitism is nothing new to Israel and its supporters.
When the Zionist state invaded Beirut in 1982, right-wing Christian Lebanese militia, the Phalange, was operating as a division in the Israeli army. The Phalangists were founded by Lebanese politician Pierre Gemayel after he returned from the 1936 Nazi Munich Olympics. Gemayel wanted to model his group after the intolerance of Nazi Germany. Up until the end of the Lebanese civil war in 1990, the Phalangists still performed the Hitler salute.
Even today in the United States, Israel’s supporters are in bed with Christian Zionists, who view the establishment and survival of Israel as essential to the prophetic Second Coming of Christ. However, according to these Christian fundamentalists, Jews will need to denounce Judaism in order to be saved on Judgement Day.
John Hagee, the leader of Christians United for Israel, who gets a hero’s welcome at the conferences of the American Israeli Public Affairs Committee, once said God sent Hitler to drive the Jews out of Europe.
According to Hagee, the Holocaust was Hitler’s divine mission to “hunt them [Jews] from every mountain and from every hill and out of the holes of the rocks…to get them to come back to the land of Israel.”
Netanyahu is a friend of Hagee and has addressed the pastor’s congregation in Jerusalem in 2012.
Bottom line, the Israeli prime minister showed that his hatred for Palestinians outweighs his concern for the Jewish people.
Palestinians are not anti-Semitic. They never had an agenda against the Jewish people. They just want to live in peace and dignity and realize their national aspirations.
The Arab American News