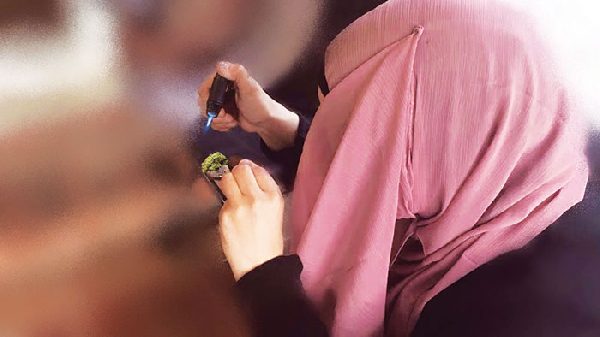 The names of some individuals interviewed in this article have been changed to protect their anonymity.

DEARBORN — Marijuana smoking is a recreational activity for many local Arab and Muslim Americans.

But those who consume it continue to conceal the habit out of fears of social scrutiny, challenges with the law and uncertainty of where it stands in the religion.

Michigan’s marijuana laws continue to remain unclear. In the last few years, the laws have shifted drastically to decriminalize personal pot smoking in many cities and to allow medical marijuana patients an easier path for consumption.

However, a majority of police departments still impose a no tolerance policy that can get any habitual user caught up with hefty fines, probation or even jail time.

In November, a measure will appear on the ballot that would allow Michiganders 21 years or older to grow, possess and sell marijuana, let state and local governments pass regulations and impose up to a 10 percent tax on non-medical pot, with funding earmarked for education, road repairs and local governments.

But for Muslim pot smokers, the law is just one of the few baggages that comes with the territory.

Many also have to hide their habits from family members and friends who perceive weed as a taboo.

The older generation of Muslims and Arabs are quick to call a cannabis smoker a “hashash,” which in English roughly translates to “fiend” or “high on.”

A family member labeled as such can cause great shame and humiliation to a Muslim household.

“I have arthritis and it helps with the pain,” Zeinab said. “I don’t feel any of that pain when I smoke. Not only does it help me physically, but mentally it also helps me relax.”

Zeinab calls herself a devoted Muslim. She wears a hijab, prays five times a day, but enjoys concluding her evening by sparking a joint.

“I have a lot of hijabi friends who smoke weed,” she said. “But it’s not something we share with our family. I would never tell my parents about it. I don’t want to disappoint them. I still want to be a good girl in their eyes.”

Zeinab said pot smoking has a misconstrued reputation among the older generation of Muslims in the community. She questions why smoking hookah or cigarettes don’t come attached with the same stigmas.

“It doesn’t make sense,” she said. “Smoking hookah is far worse than marijuana. With hookah, you are smoking it for a longer period of time. You have people in our community who think Marijuana is so wrong, yet they have no shame in publicly displaying their hookah smoking.”

But for her, marijuana is the best alternative to relieve her pain. She often disregards prescription medication given to her by doctors in favor of smoking pot.

She said that consuming alcohol is forbidden in the religion, yet no one would question people who would take NyQuil for temporary relief.

“People take NyQuil to help ease their pain at night and that has alcohol in it,” Zeinab said. “Is that haram? I don’t think smoking weed is an issue because God knows what my intentions are for doing it. I’m in pain and if it’s going to help me heal, then why not.”

One local Muslim mother said she is a medical marijuana patient and uses the substance to relive pain for her anxiety.

She said her two adult children heavily condemn her pot smoking and jump through hoops to conceal her activity from other family members and friends.

“They are scared that their friends are going to think their mother is a stoner,” Maysa said. “I would have no problem telling people I smoke weed, but my kids would have an issue with it.”

She added that she understands why her children are embarrassed by her recreational activity. She believes that if other mothers in the family found out that she smokes marijuana, she would likely be judged and shunned by them.

Maysa said many Arab teens and young adults are prone to smoking weed, but the parents are either not aware or choose to be in denial about it.

“Even on my block I’ll see it all the time,” Maysa said. “There’s a kid a few houses down who sells weed and his parents don’t have the slightest clue. I see his friends coming in and out all day long.”

But chronic pot smokers aren’t doing it just to relieve pain. Many young adults are consuming the substance simply because they enjoy the high.

“Ali”, a local college student, said he and his friends gather nightly to smoke pot just for kicks.

On April 20, widely recognized by pot smokers as “420”, a day to celebrate the cannabis culture, Ali and his friends gathered to smoke blunts in a backyard.

He obtains the substance illegally, as he does not have a medical marijuana card. He said he spends anywhere from $50 to $70 a week.

“I think it’s harmless,” he said. “What’s the worse that happens to you? You laugh and get really hungry. I don’t see the big deal.”

Ali said unlike other substances, he doesn’t believe Marijuana is addicting. He has gone weeks without smoking and didn’t experience any withdrawals.

He said he doesn’t let pot-smoking get in the way of his school and work. He doesn’t go to class high because it impairs his thinking.

“I don’t smoke until I’ve done everything I needed to do,” Ali said. “It’s like a nice way to treat yourself at the very end of a hard working day.”

“Wesam”, a close friend of Ali’s, chooses not to smoke marijuana because it is illegal and he worries he would be drug tested in his profession.

He does frequently drink alcohol. He admits that it’s a much less healthy alternative to weed.

“I would say our community is even more open to alcohol than they are to weed,” Wesam said. “The Quran forbids alcohol consumption, but people are more open about that habit than they are about smoking weed.”

Wesam said he’s waiting for the laws to become more pot friendly before he becomes a chronic smoker.

“If they make it legal, which is what appears to be happening, then I’ll stop calling my friends potheads and become one myself,” he quipped.

Haram to get high?

The Quran makes no direct reference to marijuana, like it does with alcohol and gambling. However, most religious leaders point to verses in the Quran that condemn substances that alter the state of mind.

While there are conflicting studies on the long-term impacts of marijuana consumption, many researchers have concluded that it harms brain cells that help one’s ability to create new memories.

“In general, anything harmful for our health, whether physical, mental or moral, is forbidden in Islam,” Elahi said. “If there is stuff that may not be considered an immediate risk, but it may end being harmful to our soul or body, like addiction to drugs, then that must be avoided as well.”

However, Elahi did note that it’s not a sin for individuals to use marijuana for medical purposes if it’s prescribed to them by a health professional as the best source for treatment.

Elahi said smoking pot as a hobby is not acceptable in Islam.

“Obviously, smoking marijuana for fun is wrong,” Elahi added. “It should be permissible only if that is the only option in a medical condition prescribed by medical experts.”

Imam Mustapha El-Turk, leader of the Islamic Organization Of North America (IONA) in Warren, told The Arab American News that he is personally not sold on marijuana being used for medical purposes, stating that it’s a gateway for abuse and addiction.

“I don’t know if I personally agree with that,” El-Turk said. “How about morphine? It’s a drug commonly used for medical purposes in hospitals. If people did it themselves, then there is an element of abuse. This permissibility of marijuana being used for medicine has potential of leading to abuse and the potential of people making money off it.”

El-Turk cited a growing epidemic among high school and college students who are using marijuana casually, adding that it is a gateway drug to cocaine and heroine.

He noted that this summer the IONA will be launching a campaign titled “Muslims against Drugs” that will include the participation of 200 to 300 youths.

El-Turk is calling for all religious institutions to tackle the issue of drug abuse aggressively in their congregations. He said imams must put pressure on parents to discuss drug abuse with their children.

“I have no statistics to know how many of them abuse it,” El-Turk said. “But it’s our responsibility as parents to bring awareness to our children that this is a drug, just like anything else, that can be addictive, like cigarettes. The other responsibility relies on the imams and Muslim leaders who have congregations and audiences. We need to advise our community to address this issue through different means of publications, lectures and speaking with experts.”