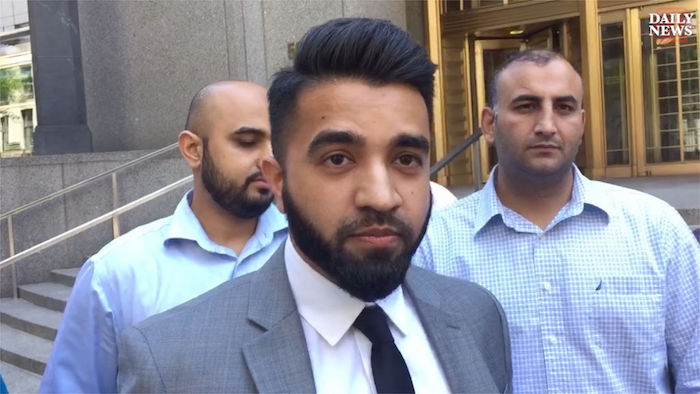 NEW YORK- A Muslim policeman who was suspended by the New York City Police Department for refusing to shave sued the agency on Wednesday, saying its no-beard policy is unconstitutional.

U.S. District Judge Kevin Castel ordered the department to continue paying Officer Masood Syed his salary and benefits, his lawyer said in a phone interview after an emergency hearing on Wednesday morning in Manhattan federal court.
The temporary restraining order will stand until at least July 8, when another judge will consider whether Syed, who was suspended without pay on Tuesday, should be allowed to work until the matter is resolved.
Syed is seeking unspecified monetary damages in the proposed class action.
In 2013, a Hasidic probationary officer won a lawsuit against the department over the same policy.
The NYPD’s written policy is that officers cannot wear beards, but an unwritten policy designed to provide religious accommodation allows for beards of up to 1 millimeter long, according to the lawsuit.
Syed, a law clerk in the department, has worn a beard of about 1/2 to 1 inch (13 to 25 mm) for years for religious reasons.
In December, according to the lawsuit, he was told by supervisors that his beard was too long and ordered on Monday to shorten it. When he did not, he was suspended, according to the complaint.
“They have this inflexible, almost absurd policy,” Joshua Moskovitz, one of Syed’s attorneys, said in a phone interview.
The lawsuit also claimed that the police department is inconsistent in enforcing the policy, which it estimated affects more than 100 officers.
The NYPD did not respond to a request for comment.
U.S. District Judge Harold Baer ruled in 2013 that the policy violated the First Amendment guarantee of free religious exercise. The Hasidic officer, Fishel Litzman, was allowed to return to work with a beard of around 1 inch, according to Syed’s lawyer.