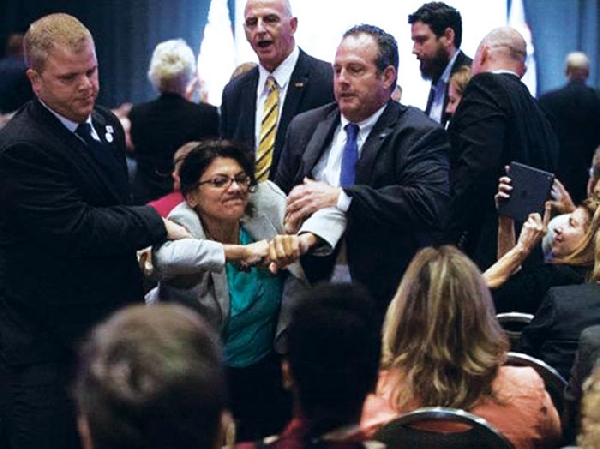 DETROIT — Donald Trump chose Detroit to announce his economic platform. Given the city’s bankruptcy and its struggle with poverty and unemployment, it seemed like the ideal place. But Detroiters do not take well to Confederate flags and racial and religious profiling.

At least 14 protesters interrupted Trump during his speech at the Detroit Economic Club on Monday.

Rashida Tlaib, a former state representative from Detroit, was an unlikely interrupter of the Republican nominee’s speech.

She told him her children deserve better and called him out on taking a Purple Heart from a veteran.

Tlaib is Palestinian American Muslim. She said she is proud of those aspects of her identity, but her actions were driven by her love for her two sons. She acted as a mother.

“I did it for my children and I was their voice today,” Tlaib told The AANews on Monday.

Trump’s speech painted a bleak economic picture of America. Although the speech was supposed to be about the economy, he managed to criticize the nation’s refugee resettlement policies.

“When somebody offered me a ticket, I said absolutely,” Tlaib said. “As I got nervous and scared after the 10th person was escorted out by Secret Service, I kept thinking of my sons, that silence is not an option when people are hurting our country.”

She said the way Trump supporters taunted the women who were kicked out encouraged her to speak up. Some community members criticized the former state rep., voicing opposition to interrupting a public speaker.

Tlaib defended her behavior, saying people use different methods to express themselves.

She said Trump’s volatile, hateful rhetoric pushed her to ask him questions in the only means possible — at a public rally.

The former state rep. said she was peacefully speaking from her heart. She added that sexism plays a role in society’s antagonizing of outspoken women.

She added that the protesters at Trump’s rally followed the “American way.”

Tlaib urged Trump supporters to realize that the presidential election is not reality TV.

“People don’t understand this is a man who is running for president of the United States,” she said. “They’re about give him the buttons to nuclear weapons. You’re supporting someone to run the United States, not to run a late night show.”

Michigan Attorney General Bill Schuette attended Monday’s event and reiterated his endorsement of Trump while speaking to reporters before the Republican nominee’s speech.

“He is the person that’s supposed to fight for our rights, uphold the Constitution,” Tlaib said. “He’s supporting someone that’s all about inequality, all about separating people based on their race and nationality, based on their immigrant status. Trump doesn’t believe in the U.S. Constitution. That tells you a lot about Bill Schuette’s character when he’s supporting someone as divisive and un-American as Trump.”