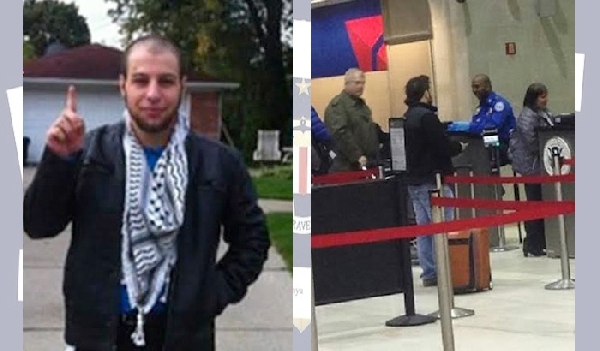 Earlier this year in Minnesota, three Somali American men in their early 20s were convicted of trying to join ISIS. The attorney of one of the defendants unsuccessfully argued that the government entrapped his client.
The lawyer said the informant, a friend of the suspects who was paid more than $100,000 by the FBI, pushed them to pursue the terrorist group, a local publication reported.
Jess Sundin, of the Committee to Stop FBI Repression, is all too familiar with the Bureau’s questionable methods.
Not far from where the young Somali American men were tried, an FBI agent posed for two years as a member of a leftist group, resulting in raids of the homes of several members of the organization.
Sundin was a member of the Antiwar Committee between 2008 and 2010. The FBI sent an undercover operative to infiltrate the ranks of the organization after the group’s protests at the Republican National Convention in 2008.
Sounding genuine, the undercover agent would repeatedly urge the leftist group to support blacklisted Palestinian and Colombian organizations in the name of solidarity, Sundin said.
“She would ask once and again and again what would seem like an innocent question; and it would feel like it was coming from a sympathetic place,” she said, describing the agent’s behavior.
According to Sundin, the FBI operative took special interest in coalition work, particularly with local Somali American groups.
“From her position with the Antiwar Committee, she spied on Muslims and other organizations in the community as well,” Sundin said.
In 2010, after more than two years of spying and incitement by the agent, the FBI raided and searched homes of members of the movement and subpoenaed others.
The government called on leaders of the Antiwar Committee to testify in front of a grand jury; they refused.
“They wanted any correspondence with anyone living in Colombia or Palestine,” she said.
Sundin suspects that if the Committee had fallen for the agent’s suggestions, she and her colleagues would have been brought up on terrorism charges.
“Specifically, the search warrant was searching for evidence for material support to terrorism,” she said.
Sundin finds parallels between the Antiwar Committee ordeal and recent terrorism cases. She said the authorities are trying to criminalize people for their thoughts.
“There isn’t anything normal about the idea that an officer of the government would spend years lying to citizens of this country and try to convince them of— or suggest until they take it up as their own or make seem attractive— ideas that are illegal,” she said.
“Not entrapment”
David Gelios, FBI special agent in charge for the Detroit division, told The AANews earlier this month that the bureau deals with each case individually. He added that the agency has rules to avoid entrapment.
“Frankly, if there were issues of entrapment in any thing we do, that makes it very, very difficult for the U.S. Attorney’s office to prosecute these cases,” he said. “So a great amount of effort is given to preventing any situations of entrapment.”
The local FBI chief added that a judge can decide if entrapment occurred.
“Entrapment is not defined by the public perception, based on what little they know about an investigation,” Gelios said. “It’s not based on their conclusion that there was entrapment involved, because they don’t have all the facts to make that sort of determination.”
As for the use of informants, he said members of the community who come forward with information do not necessarily have a formal relationship with the FBI.
“Some do it for a variety of motivations more formally, and those who do you could call an informant,” Gelios said. “Some are just citizens who call us with information. All of it is about providing us information about people who are potentially breaking federal laws or potentially are a threat to our national security. So I make no apologies for the fact that we depend on the public for information.”
At a meeting at The AANews’ offices in August, Gelios said the FBI conducts case-based, subject-specific investigations and does not target groups because of their religious affiliation or national origin.
(Hassan Khalifeh contributed to this report).
By Ali Harb