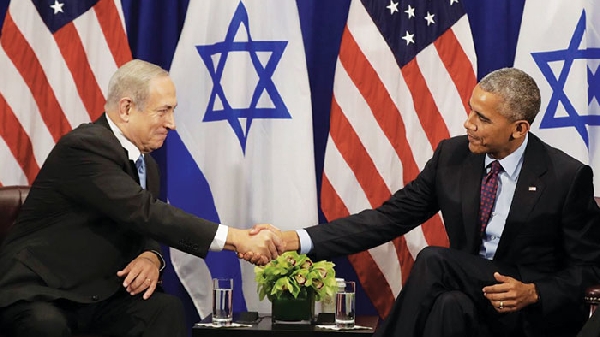 This would sound like a balanced statement if Obama had not signed a $38 billion military aid package to Israel, which would ensure the long term occupation of Palestinian land.

Similarly, in an exclusive statement to The AANews, Democratic presidential nominee Hillary Clinton reaffirmed Palestinians’ right to govern themselves in their own state in dignity and peace.

In the same statement, Clinton only made a subtle reference to Israeli West Bank settlements without explicitly denouncing them.

The occupation of the West Bank constitutes an apartheid system, where Jewish-only settlements exclusively enjoy disproportionate resources, including schools, roads and water. The Zionist settlers are citizens of Israel who live on Palestinian land. They adhere to Israeli law while expanding their presence on what would be the map of the Palestinian state.

Promoting a two-state solution while giving away billions of dollars to the army that oppresses Palestinians and enforces the apartheid is dishonest. The occupation is actively preventing the establishment of a Palestinian state. The government says it wants to solve the conflict while funding and politically sponsoring the status quo.

After the arrest of an Afghani-born man who planted homemade bombs that injured 3 people in New York City this week, Trump proposed profiling Muslim Americans in the same way that Israel profiles Arabs and Muslims.

“You know, in Israel they profile,” the Republican nominee said. “They’ve done an unbelievable job, as good as you can do.”

His comments were vile and bigoted.

Democrats and some moderate Republicans have continuously condemned Trump’s proposals about singling out Muslims, banning them and profiling them.

Would the leaders of the Democratic Party dare to denounce Israel’s methods?

No. On the contrary, Democrats often lead the way in arming Israel’s military and politically protecting the occupation on the international stage.

Democrats seem to stand for freedom and equality in the United States while financing oppression in Palestine and Israel.

American foreign policy has long prioritized interests over ethics, but given the changing geopolitical and media realities, Israel is starting to become a burden on U.S. foreign policy.

The world is watching. Social media has broken the monopoly on information, which had skewed perceptions in favor of Israel.

The Zionist state is starting to form an alliance with Saudi Arabia against Iran. It is well-documented that the Israeli occupation army in the Golan Heights has provided logistic assistance to Syrian rebels, including al-Qaeda-linked extremist groups.

Israel does not care about America’s interests or security.

Furthermore, Israeli abuses against Palestinians stoke resentment toward the United States around the world.

Former CIA Chief David Petraeus put it best when he was the head of the U.S. Central Command in 2010.

“The (Israeli-Palestinian) conflict foments anti-American sentiment, due to a perception of U.S. favoritism for Israel,” he said. “Arab anger over the Palestinian question limits the strength and depth of U.S. partnerships with governments and peoples… Meanwhile, al-Qaeda and other militant groups exploit that anger to mobilize support. The conflict also gives Iran influence in the Arab world through its clients, Lebanese Hezbollah and Hamas.”

If the government is serious about ending the occupation, a good place to start would be to stop gifting billions of dollars to the occupation army with American taxpayers’ money. These funds are better spent in cities like Flint and Detroit.