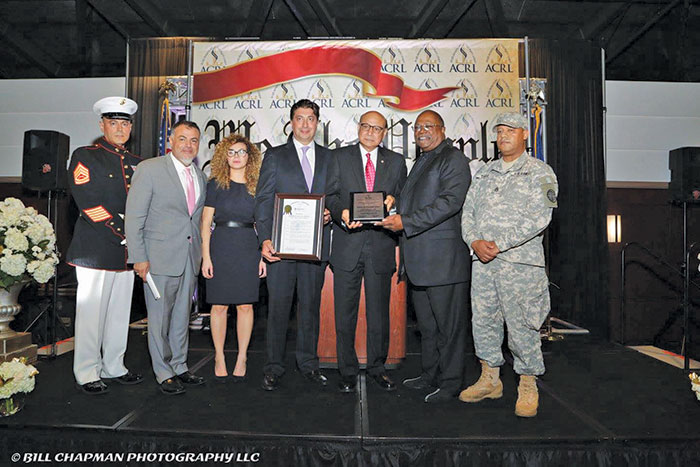 Khizr Khan and Rev. George Shalhoub of Livonia's Basilica of St. Mary are honored at the fifth annual ACRL Fight for Justice gala

Amr Moussa, former Secretary General of the Arab League and Egypt’s former Minister of Foreign Affairs, was the keynote speaker at the event, attended by more than 800 dignitaries and guests. ACRL Chair Nasser Beydoun welcomed Khan, Shalhoub and Moussa. He called the banquet the most successful the ACRL has ever held.

He discussed the revulsion that is fueled by ignorance.

“Today we see a world that lacks hope,” Beydoun said. “We see an America that is divided. We are witnessing an unprecedented presidential election. We witness hatred fueled by ignorance.”

Beydoun added that the ACRL will not surrender to fear and hate.

ACRL board member and 19th District Court Magistrate Helal Farhat introduced Moussa, who said he’s honored to attend the event and to listen to the present and future visions of Americans of different heritages.

“This is not the first time for me to be in this place or to be in this area,” Moussa said. “I’m full of admiration for the achievements— the good work done— by the Arab Americans. And, when I look around, I see African Americans, Latino Americans, Arab Americans— all of them have contributed richly to the advancement of the American society.”

He said the achievements of these Americans are the main reason hate, discrimination and fear should not inhabit America.

During the dinner, the ACRL played a video recounting the lives of the Khans. They moved from Pakistan to the UAE and then immigrated to the U.S., where Khizr Khan studied at Harvard Law School. He has found a pro bono project to offer legal services for military members’ families. He and his wife, Ghazala, also support the Army ROTC.

“They are American citizens who have sacrificed the highest price by letting their son go to serve our nation on the field of battle in the nation of Iraq,” Anthony said. “In 2004, Captain Humayun Khan paid the supreme price as he lost his life to a suicide bomber.”

Humayun Khan was posthumously awarded a Bronze Star and a Purple Heart.Anthony said Khizr and Ghazala Khan stood for justice when others didn’t. Anthony also noted that Ghazala Khan being quiet is not a sin and needs no clarification.

“For the Prophet Rumi, he has said again, ‘Raise your words, not your voice,'” Anthony said. “‘It is rain that grows flowers, not thunder.'”He said Khizr Khan fought in his own way without having to go “a 100 years strike like Gandhi” or other heroes.

Both Khizr and Ghazala Khan, who could not attend, received the Courage in Public Service award. Khan started off honoring the men and women defending the country with his thoughts and prayers and then described Dearborn as “true America.”

“I had spoken many times about the greatness of this city,” he said. “This is America. This community, this city, its leaders, its citizens are the embodiment of the value of true America.”

He also insisted that attendees should vote for the right candidate, without naming anyone, and to help refugees.

“We are not for building walls; we are not for divisions,” Khan said. “Make sure that this election, you go to your precinct with this thought in mind: That today, ‘I am going to stand for the values of America that we practice in this community.'”

Rev. Shalhoub received the “Rehab and Ahmed Amer Lifelong Pursuit of Justice Award.” ACRL founder Nabih Ayad said the awards the organization gives out are special and are meant to celebrate the great influence of the recipients.

“If you receive an award from the ACRL, you’ve done something magnificent,” he said. “You’ve contributed to the individuals in society and the good will of your community.”