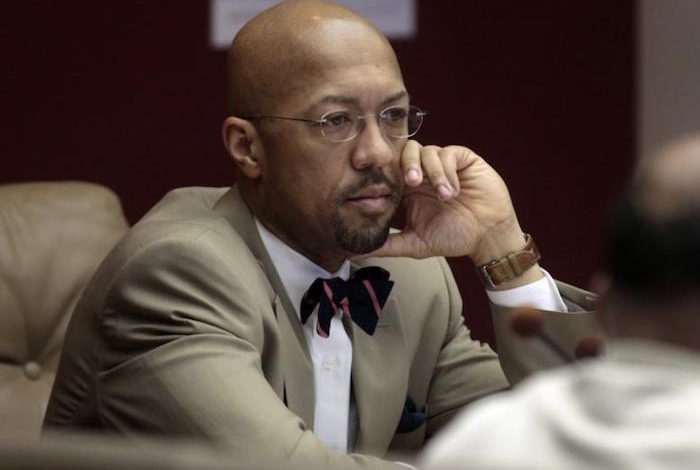 DETROIT – A former Detroit City Council president pleaded guilty on Wednesday to charges stemming from a sexual relationship with a teenage boy, according to his lawyer, capping the three-year political downfall of the once-powerful local politician.
Charles Pugh, 45, pleaded guilty in a Detroit courthouse to two counts of third-degree criminal sexual misconduct. Three more serious charges of first-degree criminal sexual conduct, which carry maximum life prison sentences, were dismissed, his lawyer, Delphia Burton, said by telephone.
Pugh admitted to having a sexual relationship between 2003 and 2004 with a boy who was then between the ages of 13 and 15, according to the plea entered on Wednesday.
Pugh will be placed on a sex offender registry and is facing 5-1/2 to 15 years in prison as part of a sentencing agreement, Burton said. The sentencing is set for Nov. 9.
Wayne County Assistant Prosecutor Ralph Elizondo was not immediately available for comment.
The court identified Pugh’s victim as Austin Williams, who has spoken publicly about the case.
“This is justice because the most important thing is that people know that he is a sexual predator,” Williams told FOX 2.
Williams told FOX 2 that he met Pugh when the politician was working as a news anchor for the channel in 2003 and that the two began a sexual relationship shortly thereafter.
Pugh, who came out as gay in 2004, took office in 2010 in the wake of the U.S. financial downturn, which hit Detroit hard.
A sharp dresser, Pugh had bold plans to turn around the cash-strapped city, but he was stripped of his post and pay in 2013 after he missed council meetings.
His decline continued that year when a local TV station raised questions over his city council absences and cash gifts given to an 18-year-old male high school student.
According to the Detroit Free Press, Pugh fled Detroit in the middle of the night for New York following the scandal and after a lengthy trial agreed to pay $250,000 in April to the student for sexually pursuing him when he was supposed to be acting as a mentor.
In June, according to court documents, a warrant for his arrest was issued in Michigan on new charges. He was arrested in New York before being sent back to Michigan to stand trial.